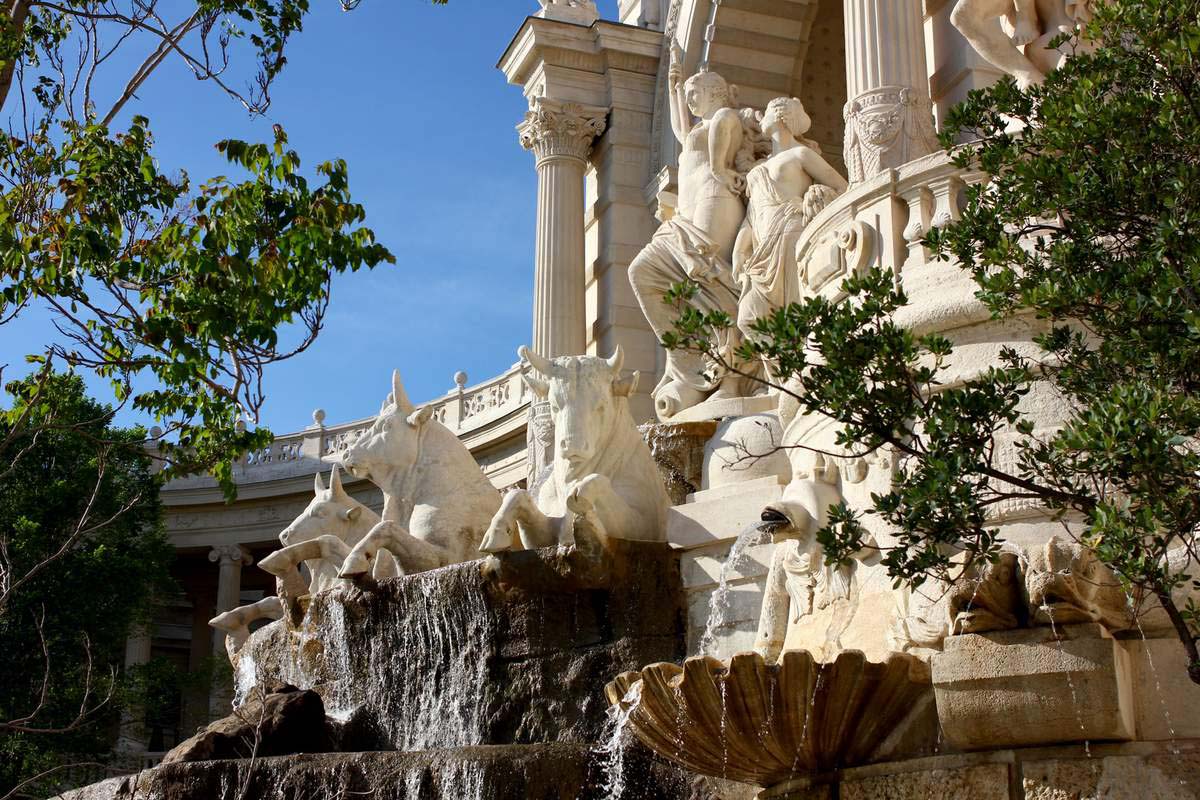 Situated in the 4th district of Marseille, there are many access points by the boulevard Longchamp, by the rue du Jardin Zoologique, by the rue Jeanne Jugan/corner of the avenue Chutes Lavie/ (car park), or by Métro 1 or tram T2, Cinq Avenues stop.

But the most beautiful show imagined by Henri-Jacques Espérandieu is definitively, up the enhanced by a perfect symetry. Both Palais and Fontaine (10m high) were inaugurated in 1869. The central part is the water-reception fountain of Jules Cavelier), with its three trois robust female allegorical figures ; at their sides, “taureaux de Camargue”. Behind two children carry wheat and grapes. All of this is enhanced under a triumphal arc (a dome with baskets of flowers and birds). An anthem to water and nature’s blossom.

The scene illustrates the importance of water and the reason why the Palace was built. In the 19th century, there was a terrible need of water after the severe drought of summer 1834 and the floods in September which caused outbreaks of cholera. Franz Mayor from Montricher, a Canal and Port engineer was responsible to dig a 80km canal, to channel the water of the Durance’s tributaries to the town (their names are carved on the triumphal arc). The works lasted 10 years and 18 bridges and aqueducts were built.

The colonnades and the majestic stairways seem to be willing to embrace the town and protect it. The powerful waterfall of the fountain becomes calmer in the last basins bordered by lawns and flowers. 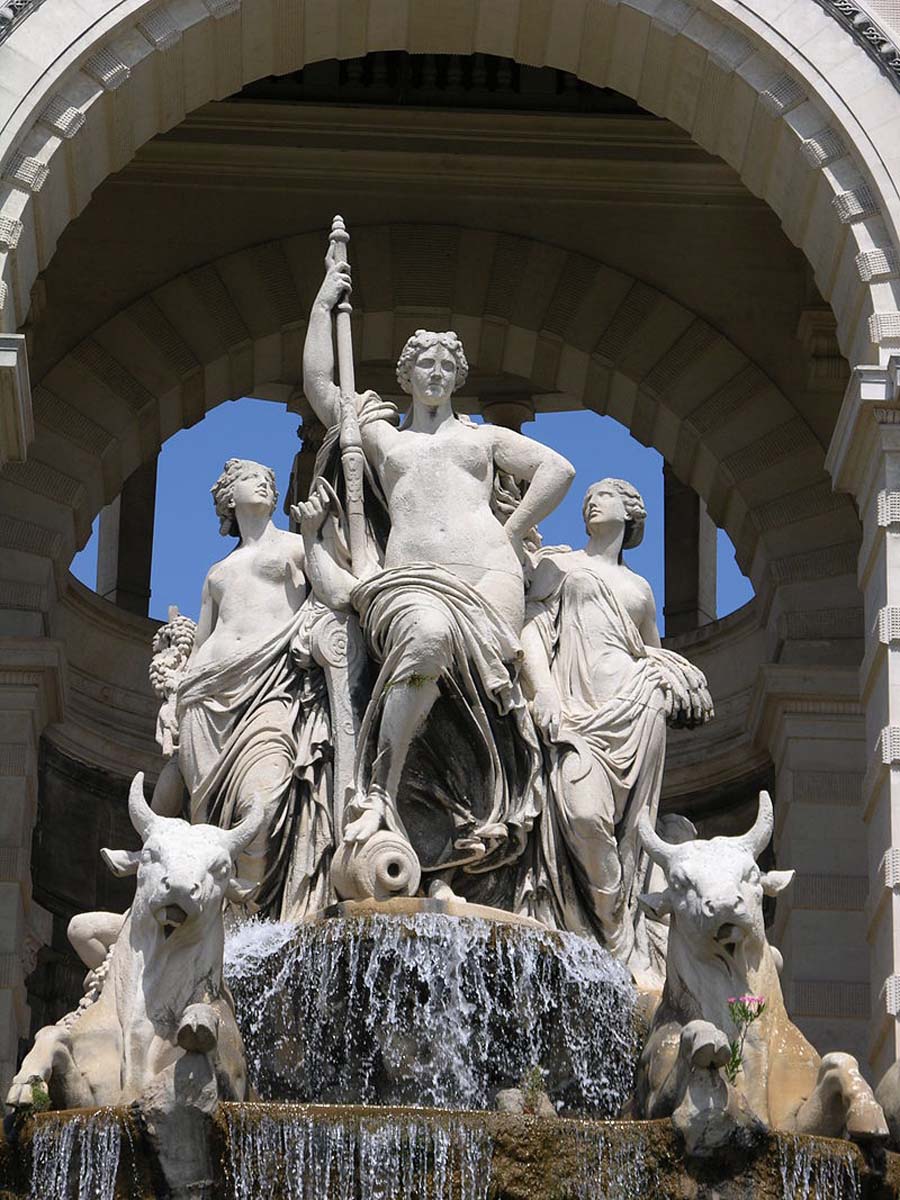 The Palais was built for water and for arts and sciences with the Musée des Beaux Arts (restored) in the middle of the left staircase (paintings from the 16th to the 19th century), and the Muséum d’Histoires Naturelles, in the middle of the right staircase (that’s where the dead animals of the former zoo have a second life). The strength of the site is also evoked by the large entrance portal which symmetrical pillars are topped with lions and tiggers pouncing on their preys (mouflon, deer, boar, gazelle/ by Antoine Louis Barye).

Behind the colonnade, a rough coastline will lead you to another garden (with a children playground), the plateau, where you can see the Durance water springs. On the left there is an extremely important Observatory, as it deals with the datas of the world largest telescopes and space experiences. It works with the Laboratory of Astronomy of the Trois Lucs (open to the public and to school groups). 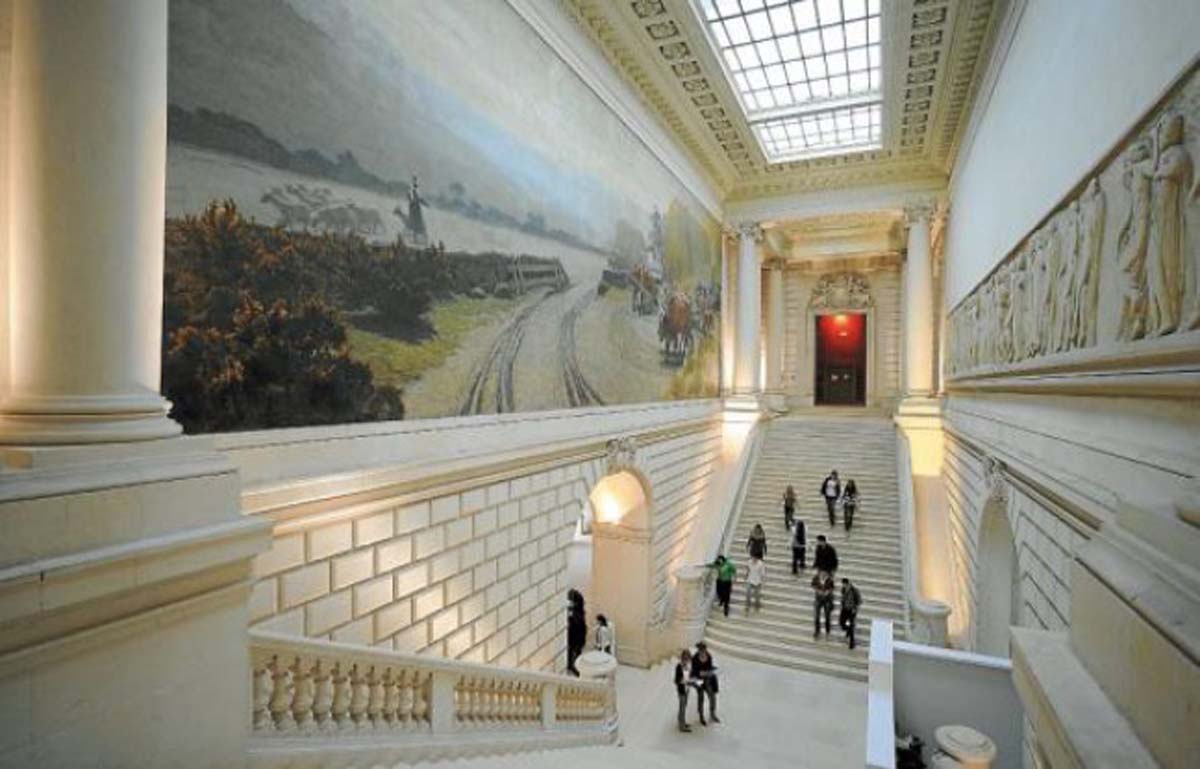 On the esplanade, the bar has a range of tasty offerings, and you can offer your children a ride in the donkey cart or a ride in the merry-go-round. On the right side, two symmetrical stairways go down to the former zoo, opened from 1856 and 1987 (5 hectares) highly appreciated by children, with giraffes, elephants, tigers, lions, bears, monkeys, birds, peacocks, snakes, a dolphin show (the large body of water disappeared)or a lions dressage show (under a tent…). 2450 lived there. From 2013, Year of culture, animals made of colored glass fibre are exposed on the lawns or inside cages. They raise the children’s awareness about preservation of endangered species and habitats. There are still pony rides and animals in the merry-go-round. There are also the playground areas and a refreshment bar.