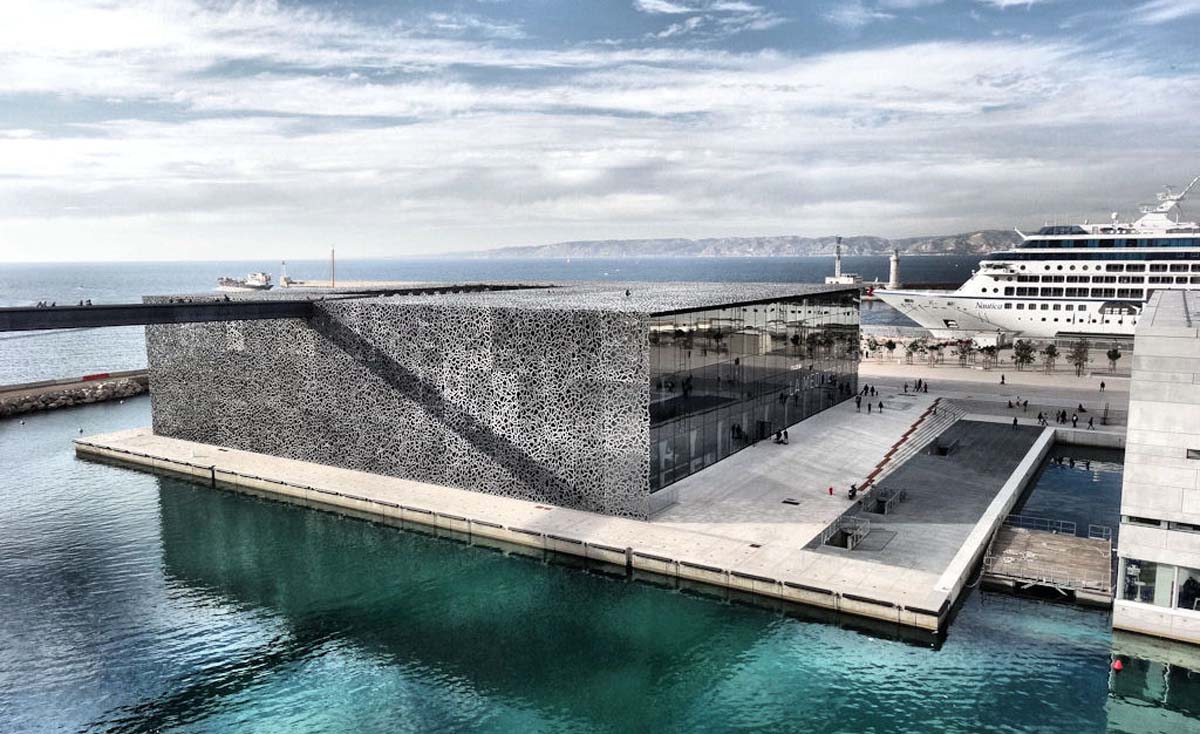 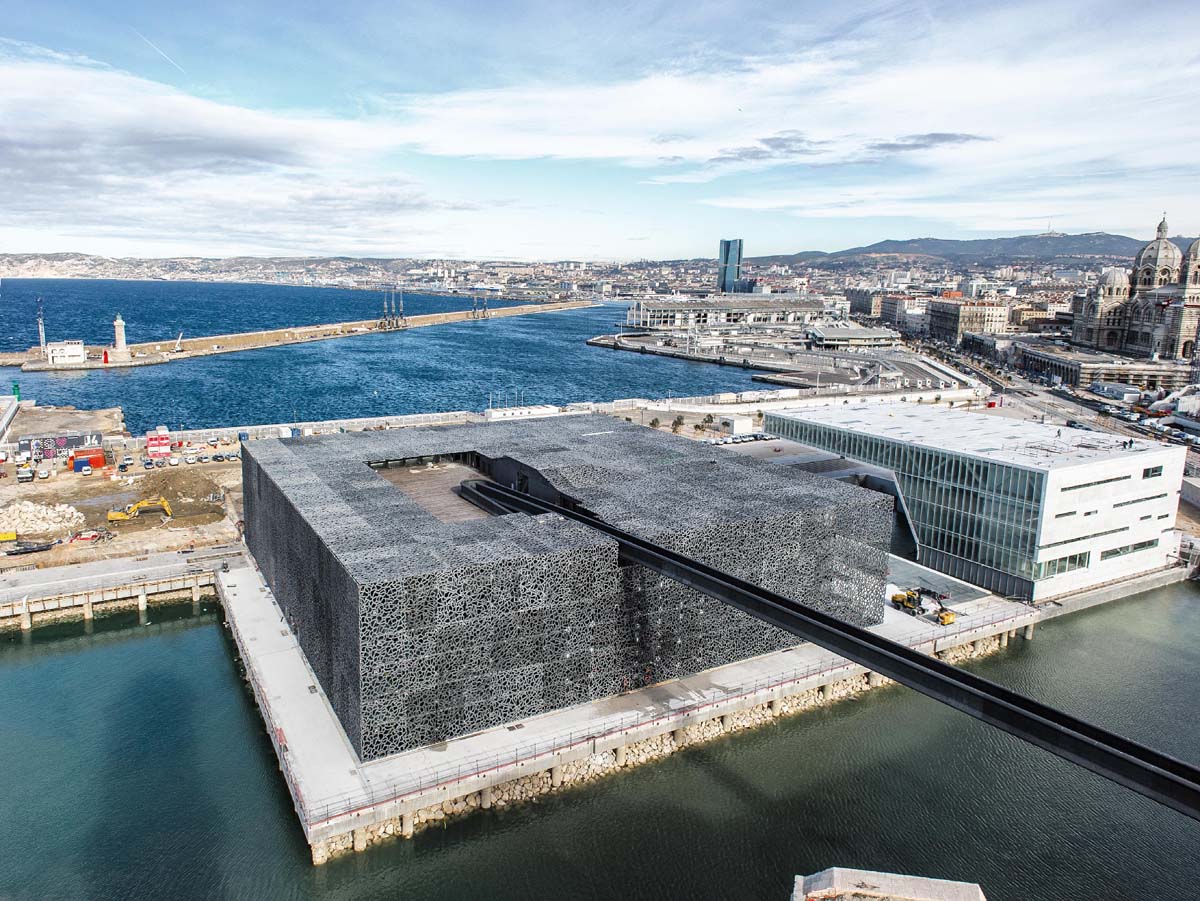 It is the first time in the world that a museum about Mediterranean culture is opened. In a grandiose setting, the MuCEM looks to be floating on water, at the end of the Vieux-Port, facing the sea. It was inaugurated on the 7th of June 2013, as Marseille was chosen as the « capitale Européenne de la Culture”. It is going to be « THE » meeting points of cultures, between the 2 shores of the Mediterranean Sea. Headed by Jean-François Chougnet, it is a place filled of history, in the heart of an ancient and prestigious heritage.

This new international cultural city has already achieved its ambition of the creation of a dialogue between European and Mediterranean civilizations via culture. Within two years, its contribution to the understanding of European cultural heritage is recognized. The APCE (Association Parlementaire du Conseil de l’Europe) had awarded the « prix du Musée 2015 » to the MuCEM. Since 1977, each year, this commission award a museum according to its contribution to heritage. For example, the former winners were : the Musée Baksi, in Turkey (2014) and the Liverpool Museum, in Great-Britain (2013). 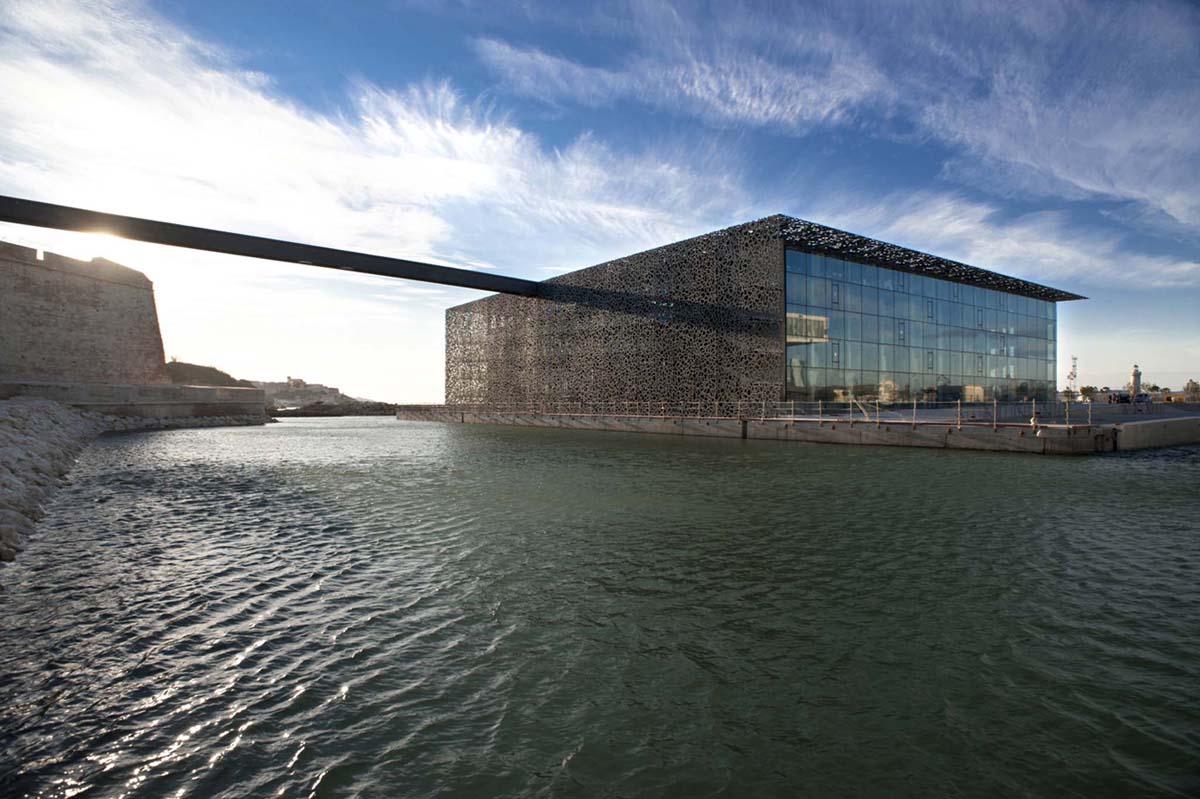 The three sites of the MuCEM (each has its own entrance) :

- J4, the new museum : n°7 promenade Robert Laffont, on the harbor ancient mole (embankment) J4. This place illustrates the major successive steps of the Mediterranean civilizations evolution (invention of Gods, the treasures of the Spice Route, the visions of Jerusalem, the banquet of the citizens, the cabinet of the Seven Wonders of the World…). A 15000m² square by the architect Rudy Ricciotti, with glass and laces of concrete walls (simulating the meshes of a fishing net) hosts in the first basement (level -1/under the sea level) a 335-seats Auditorium; level 0, (ground floor) the Galerie de la Méditerranée (permanent workshops and exhibitions), the ticket office and the Odyssée des enfants (children odissey); level 1, the “Médinathèque” ( « médi » for « Méditerranée” + ina) as it is born from a partnership with the Institut National Audiovisuel –L’INA- ; it allows access to the website Medmen.com which hosts 4000 documents from television archives of 12 countries); level 2, temporary exhibitions; level 4, a restaurant (headed by the chef Gérald Passédat, of the Petit Nice). A 115m long catwalk goes from the panoramic terrace to the Fort Saint-Jean over the sea.

- the CCR, Centre de Conservation et des Ressources : conceived by the architect Corinne Vezzoni on the esplanade de La Tourette. From the parvis of Saint-Laurent church (in the Panier), there is a 70m long catwalk linking the CCR to the Port where are the MuCEM reserves as well as rooms dedicated to researches. 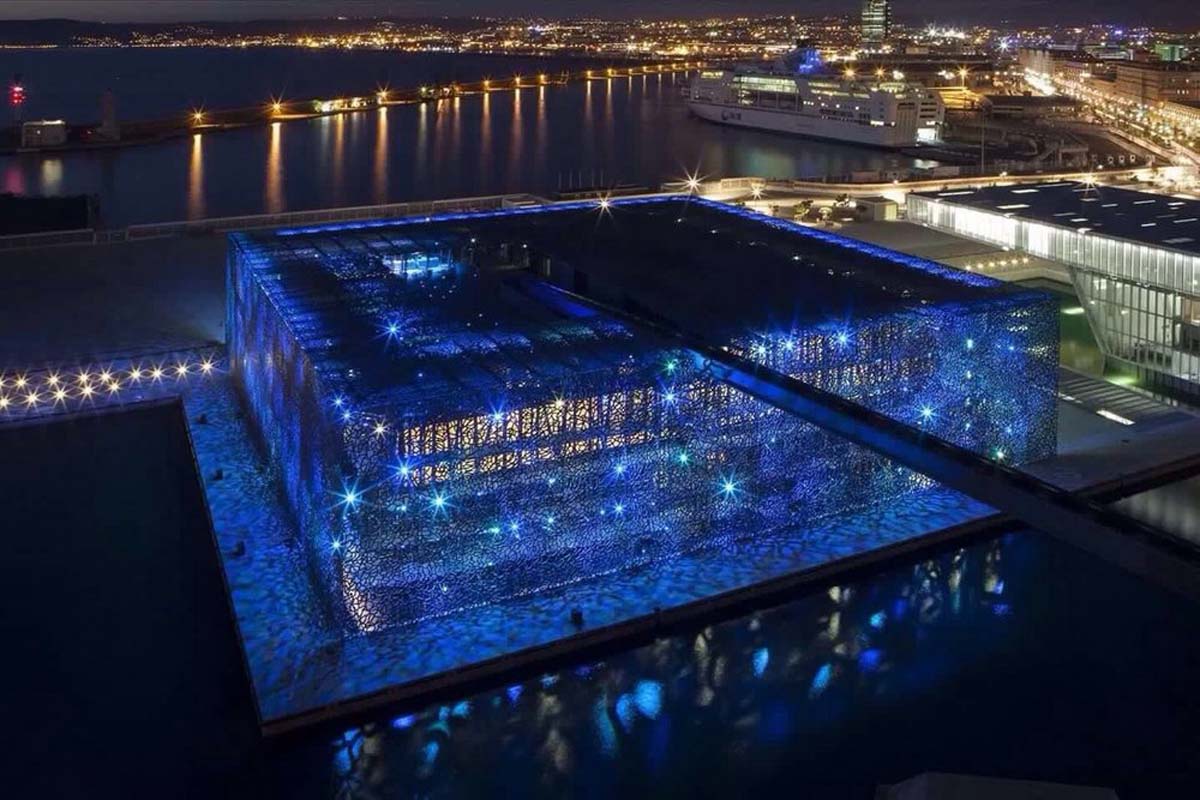 An impressive program : a magical place of 44 000 m² with a unique new concept : anyone can conceive his own way to discover, adapted to personal expectations. The collection includes a million works, most of them coming from the Musée National des Arts et Traditions Populaires (MNATP) transferred from Paris to Marseille, in 2005. The collections of the MuCEM are regularly enriched thanks to an innovative acquisition policy. The MuCEM aims at facilitating a better understanding of some contemporary issues, like the environment, Human Rights, relation to others… the program is centered on society with private or public guided tours, meetings or debates with artists or personalities, theatrical, musical, artistic ethnological, astronomical discovers, seminaries, festivals, concerts, cinema… with cocktails, dinners, outside or inside activities.

As he was inaugurated the MuCEM, on the 4th of June 2013, the French President, François Hollande, told the Marseilles they could be :«…justifiably prouf of the MuCEM »/can be consulted on Youtube.