It is well-placed on the docks of the northern shore, protected from the winds by the buttes of the Panier, facing the dominating and protective « Bonne Mère » on her hill. Right in front of it, the Ferry-Boat facilitates linkages between the two shores (free) 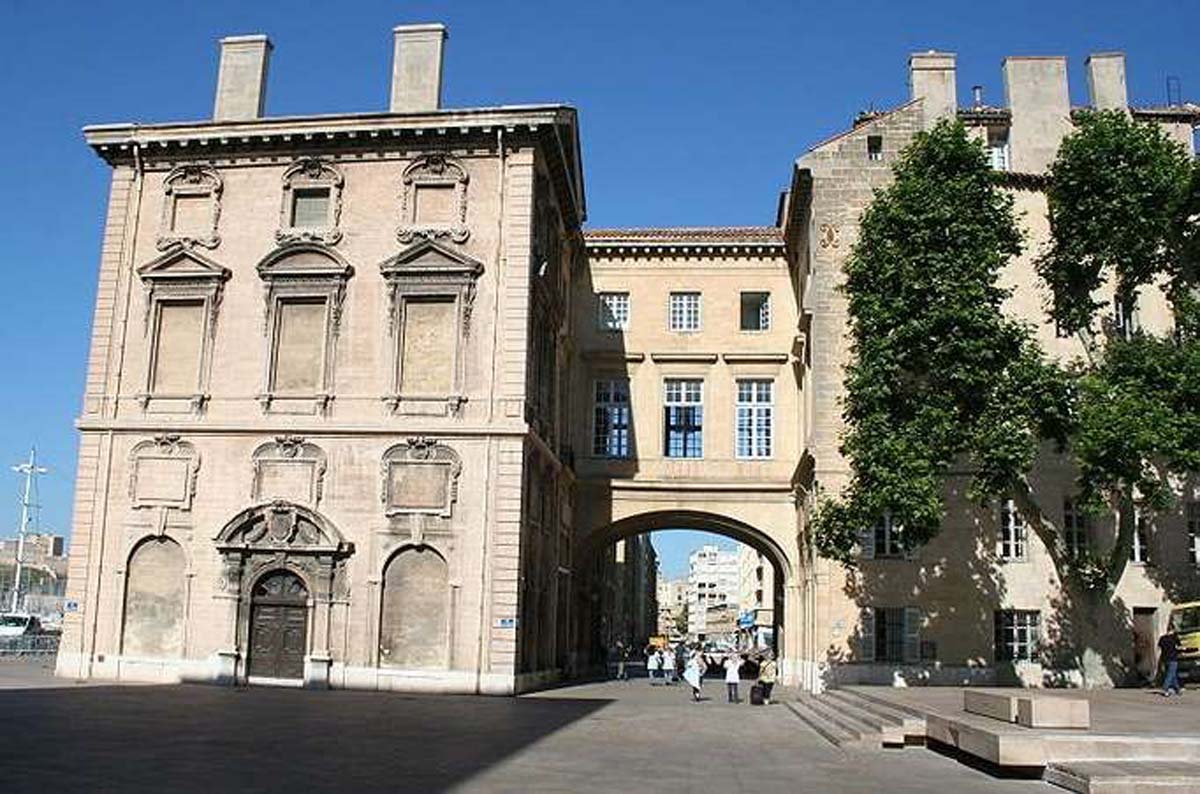 In the Middle Ages, the Confrérie du Saint Esprit was a powerful order of dignitaries. They were the very first municipal power of the city. In the 13th century, the « Maison de Ville » (town house) was built and was governed by Merchants and Consuls, until 1599. In the 15th century it was called « Communal Palace ». Consuls continued their political management in this very place whereas the merchants were transferred to the Palais de la Bourse. The new « Town Hall » was built where the former communal palace was. The corner stone was laid in 1653 and the façade was decorated in 1666 by Gaspard Puget (Pierre Puget’s brother) and Mathieu Portal (under Louis 14th). The town hall became operational in 1673. This town hall was almost destroyed during the 1789 French Revolution by opponents to federalists (who wanted France’s decentralization)

The town hall is composed of two buildings (Pavillon Puget /side facing the port and Pavillon Bargemon/side facing the square), linked by a bridge which was originally made of wood. Between 1782 and 1786 the architect Esprit-Joseph Brun transformed it into a beautiful stone gallery leading to the first floor (you can’t access the first floor from the ground floor). The road under the gallery is called « Rue de la Loge » (from the Italian word « loggia »/ as the building is of Genoan style). 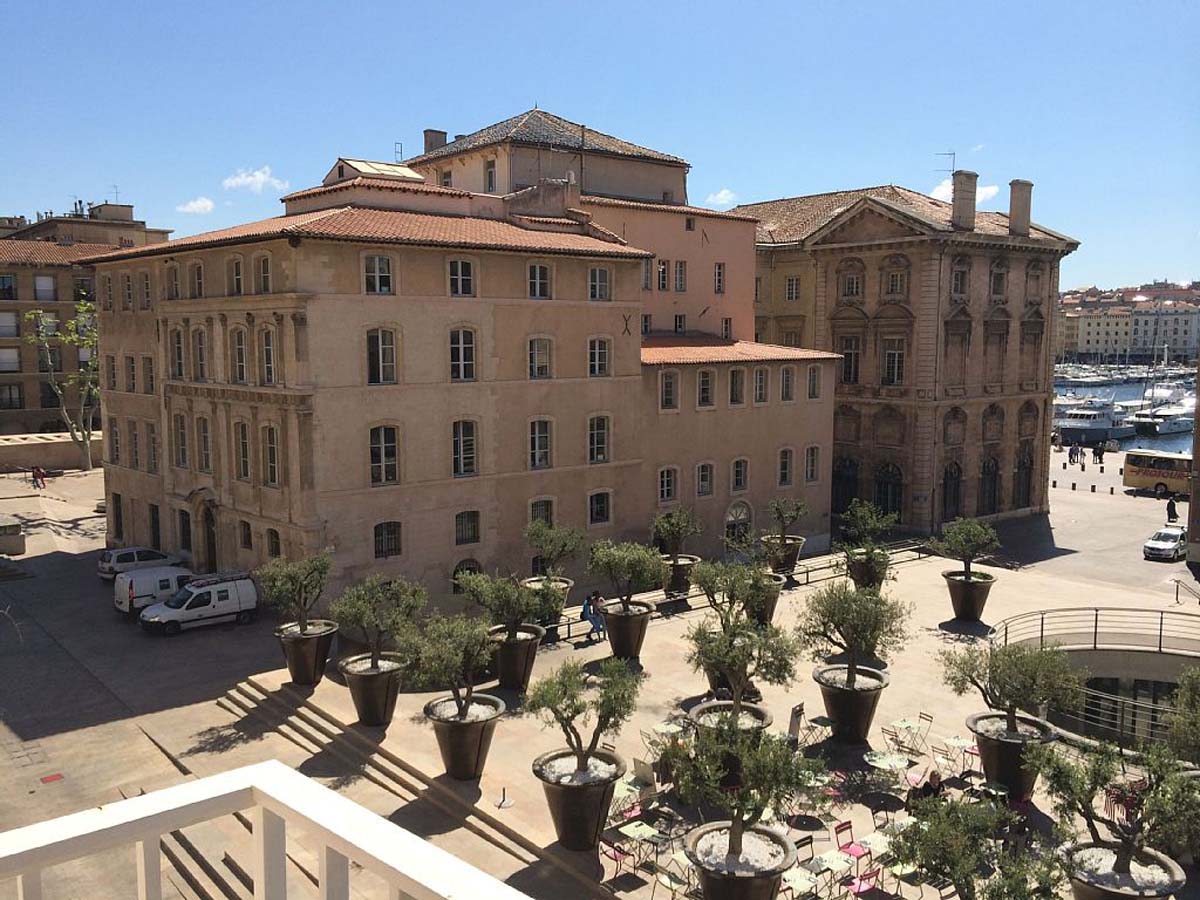 The facade is typical of The Provençal Baroque Art. This facade was inspired by Genoan monuments (in Liguria). It is composed of 2 symmetrical wings and a triangular fronton. The pilasters with acanthus leaves support the major’s office.

At the top, there is the carved bust of Louis 14th facing the Arsenal des Galères (galleys arsenal), symbol of his power and authority on the rebellious Marseille. Above the main door, there is a reproduction of Pierre Puget’s escutcheon.

The last restoration of this building was made between 1999 and 2006.

The architect Franck Hammoutène wonderfully reorganized the external space, creating a beautiful 20,000m2 surface. A spacious and harmonious square enables an unobstructed view of the Hôtel Dieu, spectacularly highlighted. It must be seen at night, wonderfully lit. The Espace Villeneuve-Bargemon (next to the Town Hall, on a side of the buildings where windows have been stuffed) is the extension of the Town Hall on 8300m2. Now, the city councillors may meet in a reserved big room among other working and meeting rooms. Near there, on the square, check out the two statues of Pythéas and Euthymènes (Great sailors of the 6th century AD) or to the wall formed by the big stone blocks of the Roman thermal complex which once overlooked the port. 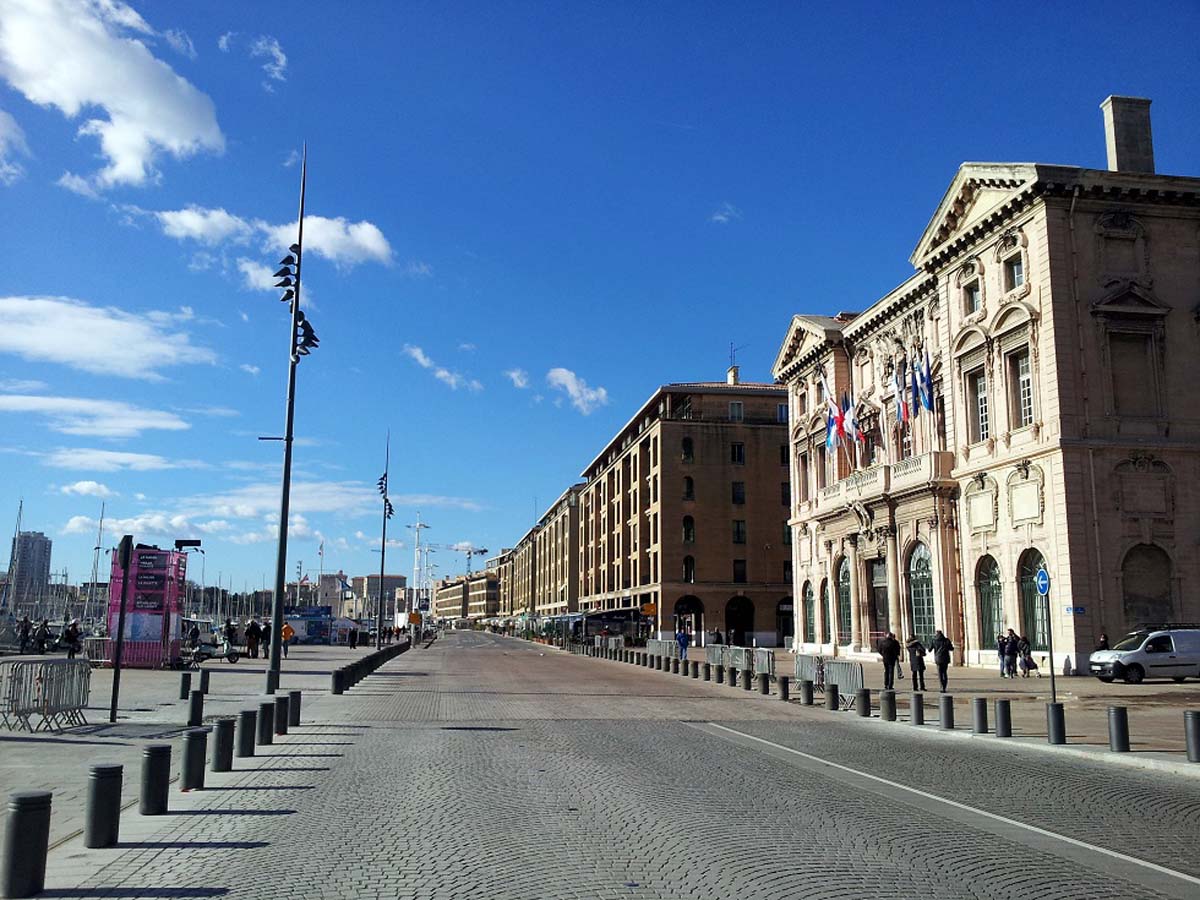 In front of the Town Hall and around the Port, the traffic has been drastically reduced but the underground car Park Place Jules Verne can host 570 cars (the first 30 mn are free). You can enjoy nearby small restaurants, and the original and graphic show of all the olive trees, symbols of the Provençal region, planted in huge clay pots.

In front of the Town Hall, the square and the pavements have been enlarged. There are sometimes varied shows, cultural events or festivities (Sound and light show on the facade, fans of the Olympique de Marseille acclaiming their champions standing on the Mayor’s balcony, a flamenco show, a ballet on a stage over the water surface, a large number of bikers parading for ecology, the “Téléthon”…).

For the « Fête de la Musique », the esplanade Bargemon hosts the crowd to listen to the orchestra and singers of the Marseille’s opera. The “Journées Européennes du Patrimoine » have shown that the Town Hall is the most visited monument in the Phocean city.