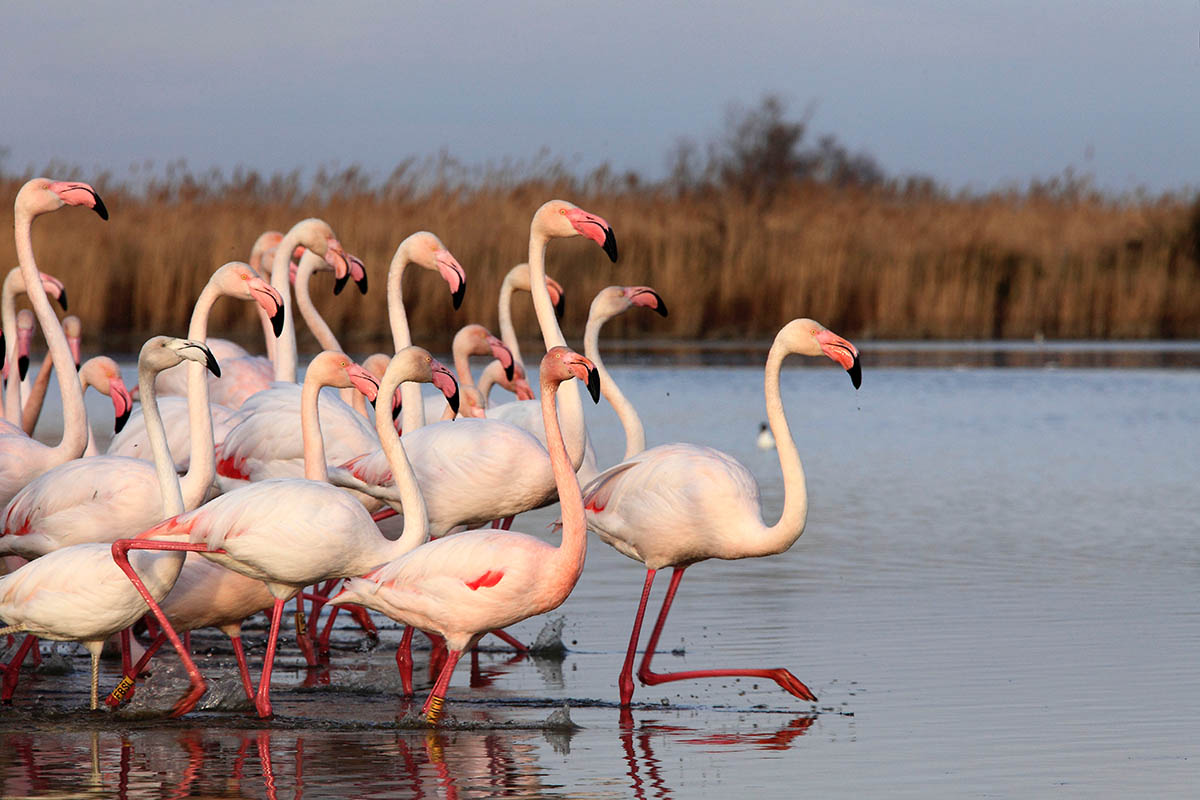 The Camargue is probably the French wealthiest moist area and one of European most remarkable one. Situated between the two branches of the Rhône and the Mediterranean Sea, it is for  a hundred species of birds a highly hospitable habitat,  allowing them to stop in any season.

Contrary to conventional wisdom, the Camargue is not completely protected, the best way to discover it is to go in its natural spaces open to the public. In Winter, for the lights, for the thousands of hibernating ducks and the pink flamingos amorous courting. In Spring,  for the numerous hatches of herons, egrets, terns and avocets. Each Summer and Fall for the myriad of migratory birds coming from Northern Europe stopping before going to Africa.

In the heart of the Regional Natural Park, the Ornithological Reserve of the « Pont de Gau » allows the visitor to see, on 60 hectares of land, 250 species of birds to be seen in an incomparable closeness.

There are seven kilometers of hiking paths, three possible routes, more than dozens observation towers so that you can be very close to the birds without disturbing them. Reading the information panels can teach you a great deal about the birds (e.g. flamingos aren’t pink because they eat  rose shrimp, but because they  fix the carotene in their food, the plankton !!).

Picnic areas with facilities are available.  One ticket for the whole day.

The Camargue : a wild land attached to its traditions

The Camargue, wrapped in the branches of the Rhône, hosts diverse wildlife, flora and fauna, hence its touristic immense success. The regional natural park covers 86 300 hectares.  ; the grace of the flamingos on their stilts, the pride of the breeding bulls  and the beauty of the horses, jewels of the Camargue, give it a fresh and natural cachet which seduces the visitors.

This atmosphere is reinforced by the vast rice paddles and salt fields which is revealing of the crystalline and unaltered climate. This terroir, divided in three zones, provides a unique variety to be discovered : the Haute-Camargue at the north of the Etang de Vaccarès, the most agricultural and populous, the Moyenne-Camargue, pastures for animals, and the Basse-Camargue composed of salty ponds and sansouires…

The « sansouire », vast marshy area and salty steppe, brands the landscape and the visitors ‘minds. These waterlogged and saline lands host a unique vegetation like the Salicornia which are brownish at fall and tawny in winter.

The ground is powdered with the blue of the Saladelle which are in bloom from summer to fall. Even if people cleared the huge forest that were once around, iris, brooms, forget-me-nots and asphodels create an elegant Camargue, freed in Spring, as the bulls and horses become the architects of a constantly reinvented landscape. The population remains attached to the art of nacioun gardiano.

The black and stocky bull of Camargue (« Lou Biou » in provençal language), with his ringed horms is the Lord of those lands. Living God during popular festivals such as the race for the « cocarde » or the Ferrade, this formidable opponent is one of the icons of the country. But the loyal friend of the « gardian » is his horse, undeniable part of the Camargue scenery. Useful to cross marshes, this animal perfectly harmonizes with the environment the famous white Camarguais which is the oldest wild race live in the free atmosphere of the “sansouires”. 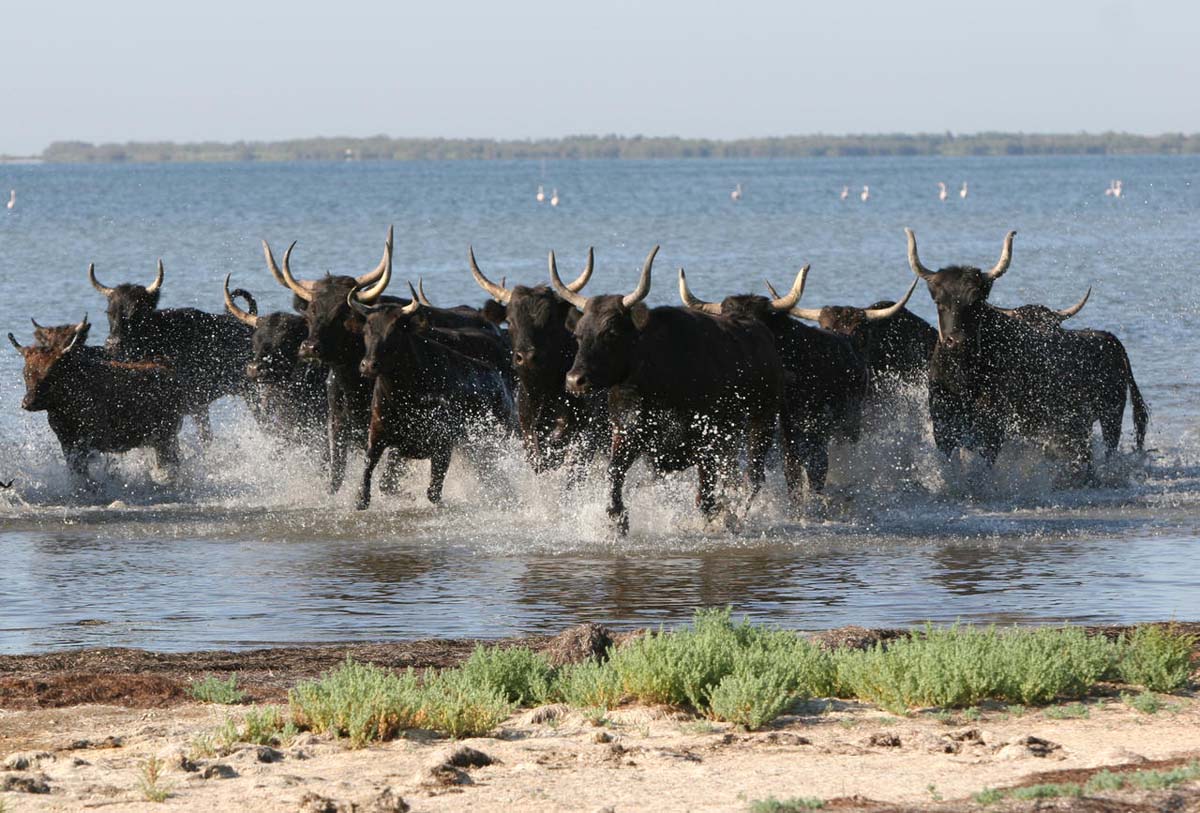 The slender and graceful pink flamingo is the central motif of this land of ponds and marshes. It always       appears to be floating over the water, in search for food. It is a very fearful animal, flamingos gracefully take flight from the first suspect sound. As Winter comes, it flies to tropical countries, below the shores of the Mediterranean.

Considered to be one of the widest migratory centers of Europe, the Camargue is also a bird sanctuary with about 350 species of birds. Some are transients whereas others are permanent residents of reeds and marches. But the raptors are princes of the sky : the marsh harrier, the black kite, the sparrowhawk, the hawk… As they spread their wings and fly over the delta, it looks like a living painting!

Even the eagles come to visit the sky of Camargue. Nightingales, wagtails, chickadees, huppes, magpies, jackdaw and thrush… so many songbirds live there! This humid environment is a mixture of fresh and salt water that attracts palmipeds such as silver gulls and  the black-headed gull to live and breed.

The unique beauty of the natural environment of Camargue presenting a remarkable diversity of flora and fauna, is linked to a rich historical heritage, particularly around Arles. This town of Celto-Ligurian origin owes its development to a perfect geographical position.

In Roman times, Arles is much bigger than Marseille, as attested by the recent archaelogical finds, like for example the splendid bust of Jules Cesar regained after searching : there are only two other models in the world.

Nowadays, Arles is the largest town in France with 76 000 hectares of land, 47 000 of them for the Regional park of Camargue. European Capital of Rice, there are some traces of the Roman civilization with  its arena, its museum and  its antique theater.

The Roman traces don’t seem to stop with Arles, indeed, according to a legend, Maria, Lazarus and their handmaid Sara would have stopped in Camargue, during their exile after Jesus’death. The church of the Saintes Maries de la Mer, dedicated to the Black Virgin, patron saint of the Gypsies, proudly stands in the city to protect both “Saintes Maries”.

The statue of Sara in the crypt, dresses in multicoloured skirts and wears jewellery, attracts each year the pilgrimage of many faithful and the witness of faith of Travellers.

They come from the four corners of Europe to pay tribute to their saint, Black Sara. For about ten days, they invade the streets of the city, which becomes their holy land. 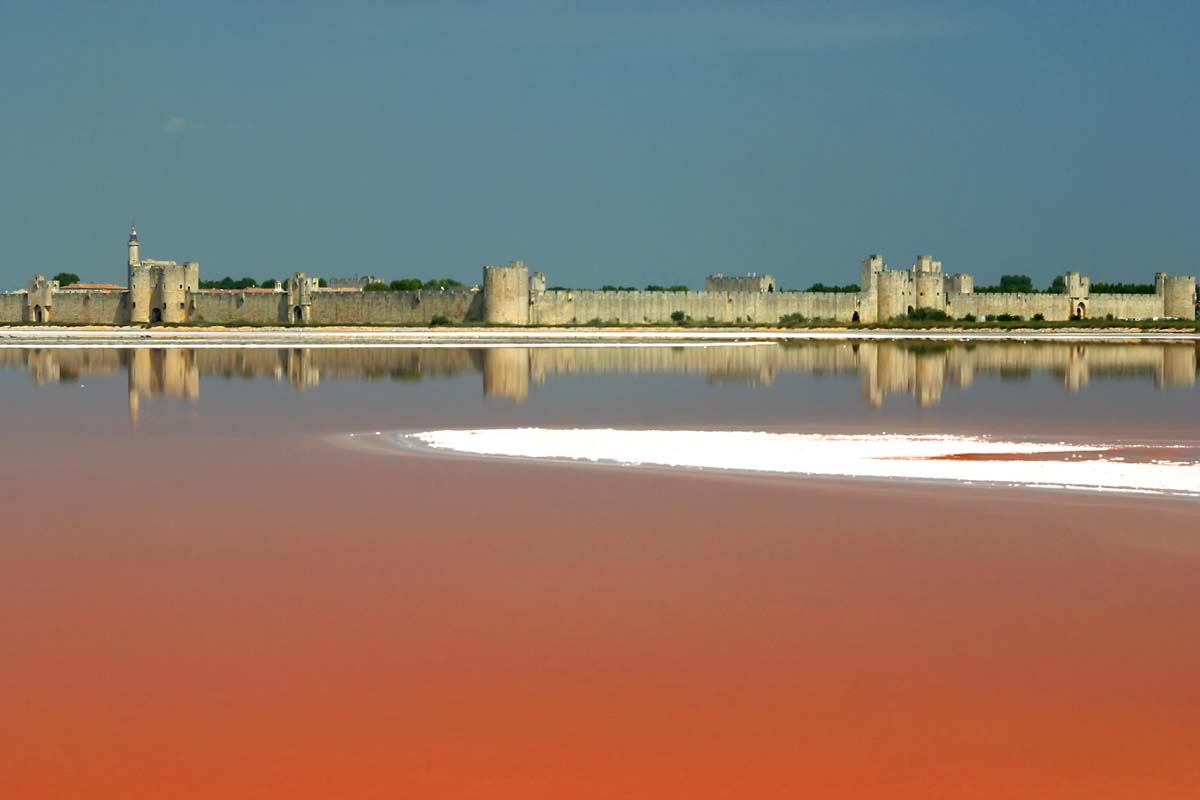 The Camargue rice, an exceptional product

Since 2000 the Camargue rice received the European seal « protected geographical indication », a quality label that underlines the particular conditions that characterize the growing of the Camargue rice.

The Camargue is a wetland area remarkable in terms of its species diversity. It owes its landscapes and biotopes to human activity and thus to farming which exploits and maintains its natural resources.

The Camargue, immersed in sunshine and swept by winds is the land of water and salt. In this context, the swamp rice is one of the main regulation element. Indeed, flooding rice allows to flush out the salt accumulated, to fight against land degradation, the alternative to the rice field being the marsh or the steppe.

The Camargue is today the main French rice producer. Spring planted, the rice is ready to be harvested in autumn, during drier weather to safeguard its quality.

This exceptional product meets the specifications of high quality rice which guarantees both homogeneity and a great taste.