The Alpilles and their mantilla of blonde stone stand not far from the Luberon. Salon guards the east entrance, whereas Tarascon supervises the west side. 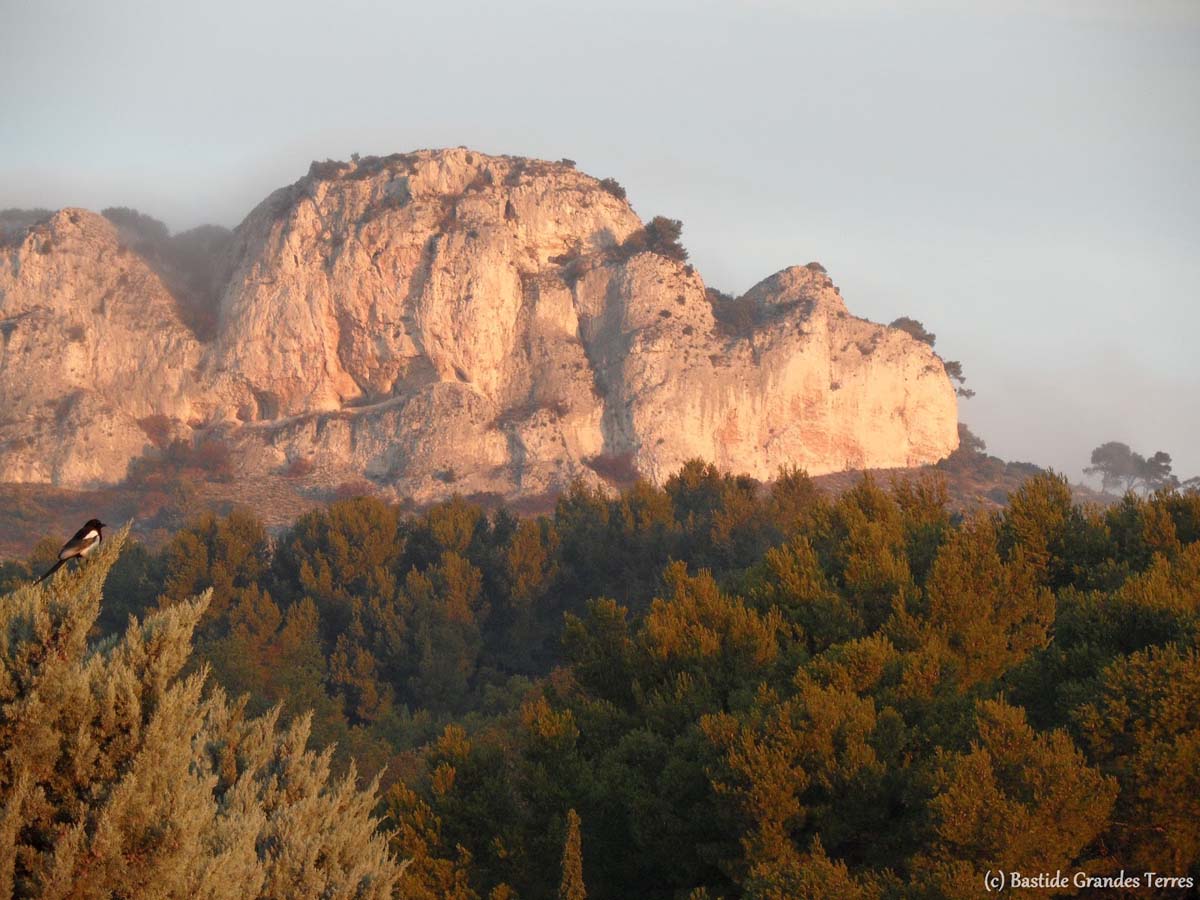 This is a mysterious land swam in a radian light which sets one’s heart on crests of the high limestone hills. This is also a cultivated land which takes root in its glittering country-side heritage. In these heights (no higher than 500 meters) full of turbulences, erosion has shaped mythical creatures, titans engraved in the stone.

This is the land of Purépecha people, of dragons, of the famous golden goat guarding a unique treasure.

This is the land of the sheperds, who are always sorcerers, and of prophets such as Nostradamus.  The Alpilles are riddled with caves.

Surrounded by fields of cypresses and olive trees, clear signs of recognition of the soft and generous soil, quaint villages sublimate this landscape: Le Paradou, Maussane, Mouriès, Fontvieille… the majestic Baux de Provence, Saint-Rémy, with his antic site of Glanum, Graveson and Maillane. 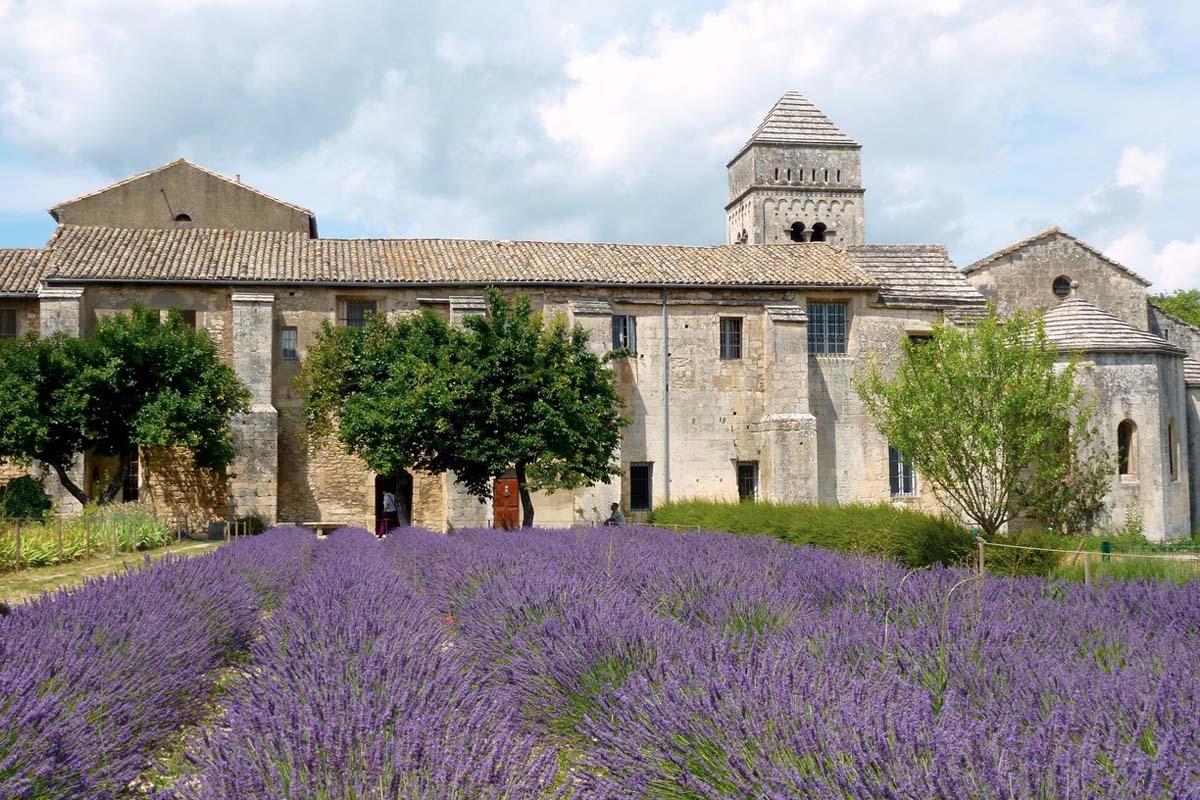 Saint-Rémy de Provence, now classified, was built on the most ancient European archaeological site. The counter of Glanum was founded in 3rd century BC, then redesigned by Romans under the authority of Jules Cesar. Many antic traces spectacularly show that many civilizations have established there.

The great baths, the long residential avenue, the temple and the natural source of this real  Gallo-Roman town dated BC 30 to 10 can be admired. The « Arc de Triomphe » and the « Mausolée des Antiques » are also to be seen in Saint-Rémy.

Such landscapes, so poetic and noble inspired many artists, writers and painters. Vincent Van Gogh’s eyes sparkle with a million lights in front of the entrance of Glanum that inspired him to paint « The olive tree and the two-holes mountain », on the Chemin des Carrières as he set up his easel to paint « Wheat field and cypresses », or on the allée Saint Paul « L’asile St Paul à St Rémy », where he entered in 1889.

Despite his mental fragility, after he cut off his ear, Vincent painted with desperation this landscape on more than 140 paintings about nature : olive trees, wheat fields but also several self-portraits.

Classified and labeled as one of the most beautiful village of France, les Baux de Provence mix mystery, history and architectural esthetics. This town has indeed an architectural treasure with 22 vestiges classified as historic monuments. 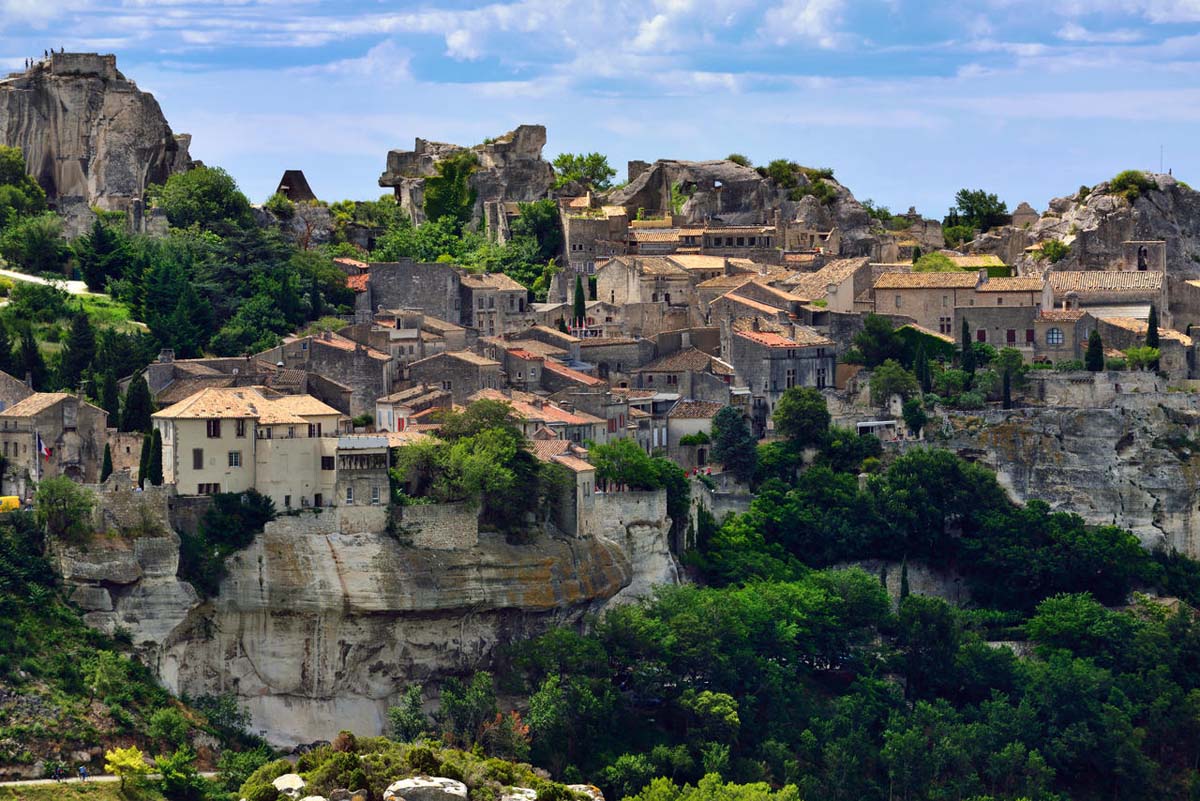 Originally town of the princes of Baux, associated to the county of Provence in 1426, then to the French realm, the city has always been synonymous with splendour. In 1642, the King Louis XIII offers it to the Grimaldi, princes of Monaco, who still own the town today.

The cyclopean city, nave of the fortress of the Baux breaks the sky with its bow. The ruins of this castle are still haunted by lords who formerly lived there, « race of aiglons, never vassal », the first big Provençal family, heirs of the Magus Balthazar.

The Val d’Enfer is the threshold of this Provençal land, a tourism hub. Thus, this desolate landscape scattered with a few skinny pines inspired Dante for his description of Hell.

The peaks corroded by the wind, the treacherous cracks and the necropolis sealed in the concretions of limestone move the visitors.

The oppidum of the Bringasses is still visible, at the north of the « col de la Vayède”. Access to the site is provided by a small goat path on which you will be quickly surrounded by wild thickets encroaching every day upon the vestiges of the ancient ramparts.
We are enchanted by this oppidum, ancient heritage and witness of the tenacity of the first Baussenques.

In addition to these legendary and fantastic tales, the Baux are also the place for gourmet pleasures such as food! A,d lovers of gastronomly won’t be desappointed with  the variety of famous restaurants at the Baux, for example the prestigious “Oustau de Baumanière”.

With the Pays d'Aix and the Luberon, it is the third country of Provence interior, at the north-west of our department, next to Avignon and the capricious Durance.

This land made of small mountains and valleys houses a culinary heritage and products recognized throughout the world. Indeed, the olive oil of the golden triangle (a region that stretches out over the Alpilles) has incomparable virtues, the AOC label and an international reputation.
Olives of the Alpilles can be consumed such as they are, broken or split open with a mallet tap. That’s where you get the big division.  To each his truth. Laurel, fennel or garlic scented oil, appetizer or not, if you start eating you can’t stop.

In this region, an unmatched agricultural knowledge allows us to enjoy delicious fresh fruits and vegetables. Go out and look at the countless marketplaces to find and taste authentic fresh products, indeed it is where nature provides you with its most recent creations.

We also recommend the goat cheese produced locally which is both delicate and tasty. Matured in a moist and shadowed atmosphere, it has a very particular taste.