Between Languedoc and Provence, the Gard bénéficie dry and hot Mediterranean climate in summer where the Mistral sometimes gets lost. Thanks to its privileged geographical location, this region has a unique touristic heritage, with great cultural sites like Uzès, Nîmes or Aigues-Mortes or amazing natural sites from the Cévennes to the little Camargue.

Villages in the Gard are very typical of Southern France, they have several charms and facets.  Some are lying in plains whereas others are perched in the hills. Each geographical area is a small country on its own. Going from one place to the other, you will be fascinated by the light, the beauty and the sweet art of living of these landscapes.. 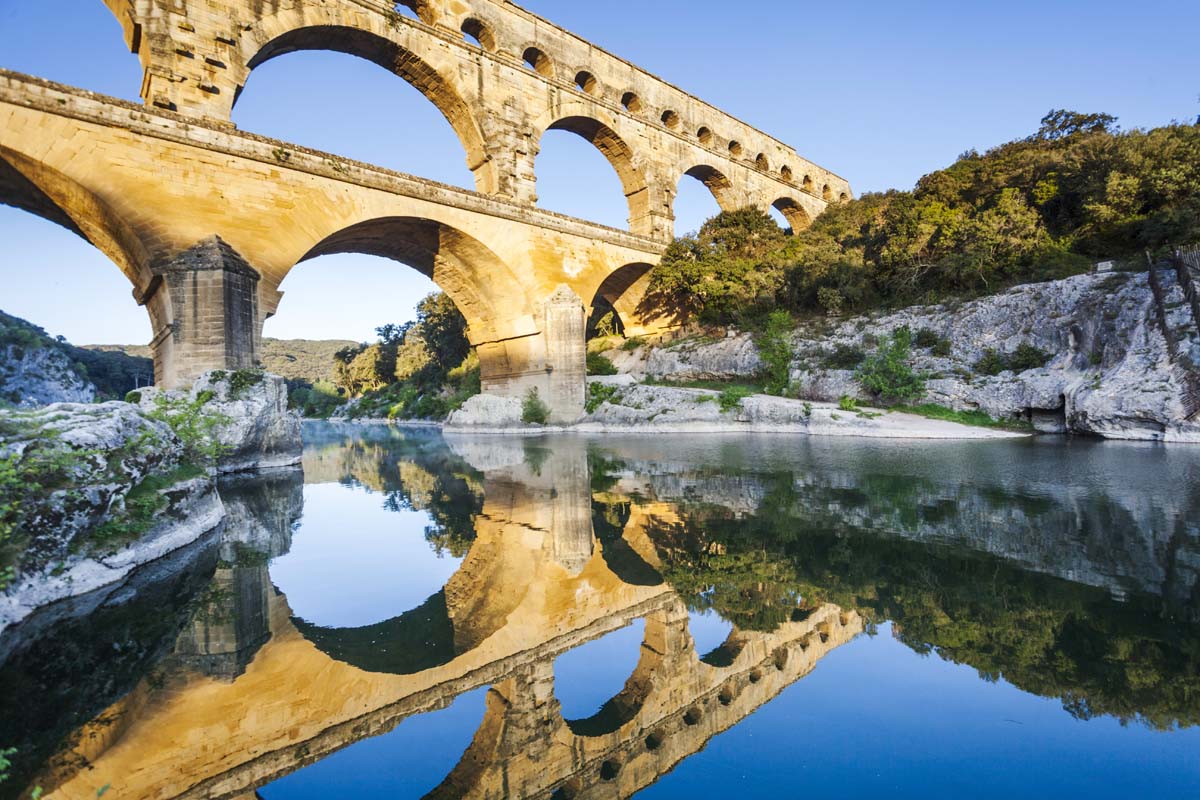 History is everywhere in the Gard. Indeed the Rhône Valley has always been a thoroughfare, and traces of men living there from prehistory are still discovered today.

Many civilizations have left traces, the most important vestiges are of course Roman with the famous « pont du Gard », magnificent construction classed as a World Heritage site; the Oppidum in Gaujac or Cesar camp in Laudun, the arenas or the « Maison Carrée” (Square house) which stands in Nîmes’modern town center.

Medieval times also left traces in this beautiful region. Many sites are to be visited : the Château-Fort (the castle) (le Castellas)  the old village of St Victor Lacoste facing the castle of Gicon, or the medieval town of Aigues-Mortes.

If you really want to go back in time, you should visit the Fort St André as well as the Val de Bénédiction in Villeneuve les Avignon.

All the pleasures are in the Gard

From the mount Aigoual, highest peak of the Cévennes, to the fine sand of Mediterranean beaches, the Gard has a whole palette of breathtaking sites and a diverse and beautiful heritage.
Verdant forests, wild garrigue and natural seaside are part of this area which is a virtual mosaic lit by the warm and bright Southern sun. The Gard is the witness of 2000 years of History and cradle of Roman civilization.

Major step on the Via Domiziana as well as historic path along the Rhône, the Gard abounds in enchanting and amazing landscapes modelled for centuries by men and women who want to preserve and transmit these natural and cultural richness. Once a land of welcome, these department remains as attractive as ever. Fans of History, of nature, of sea, of mountain, culture or fiestas, the Gard awaits you.

Nîmes, town of Culture and History

Modelled for 4 millenia, the soul of Nîmes is shared, from the menhir in Courbessac to Viallat’s paintings. A few Gauls settled here around a water source and called this place after the name of the God of Water Nemausus. Nîmes was born.

The city acquired a certain importance later with the arrival of the Romans. Grandiose places of worship are built : Maison Carrée, Sanctuaire de la Source ; others are places for games : Arenas.

The castellum supplies all the city in water, the ramparts protect it, entries are filtered: Porte d'Auguste, Porte de France ; du haut des tours, we watch from the top of the towers : Tour Magne. The currency is truck in Nîmes. The celebration of a victory in Egypt will give the symbols that represent the city, its coat of arms, a crocodile chained to a palm tree crowned with a laurel wreath.

As History follows its course, new cultures arrive in Nîmes. The town develops its architectural originality and its unique identity both assimilating and resisting these new cultures. 150 years of religious conflicts followed the turbulences of the medieval times, Nîmes becomes one of the most important French Protestant community...and it develops its critical spirit. An amazing contradiction persists between the apparent austerity of the town and its craziness during festivities.

As the arenas became place where shows are given, since the 19th century, the bull is honored, with or without putting to death. Here is Nîmes, with its spanish influence and folklore.

Don’t ask people from Nîmes if they feel Roman, Andalusian, Provençal, from Languedoc, Camargue or Cevenol... It is all at the same time. This is what lies behind their subtle charm ! 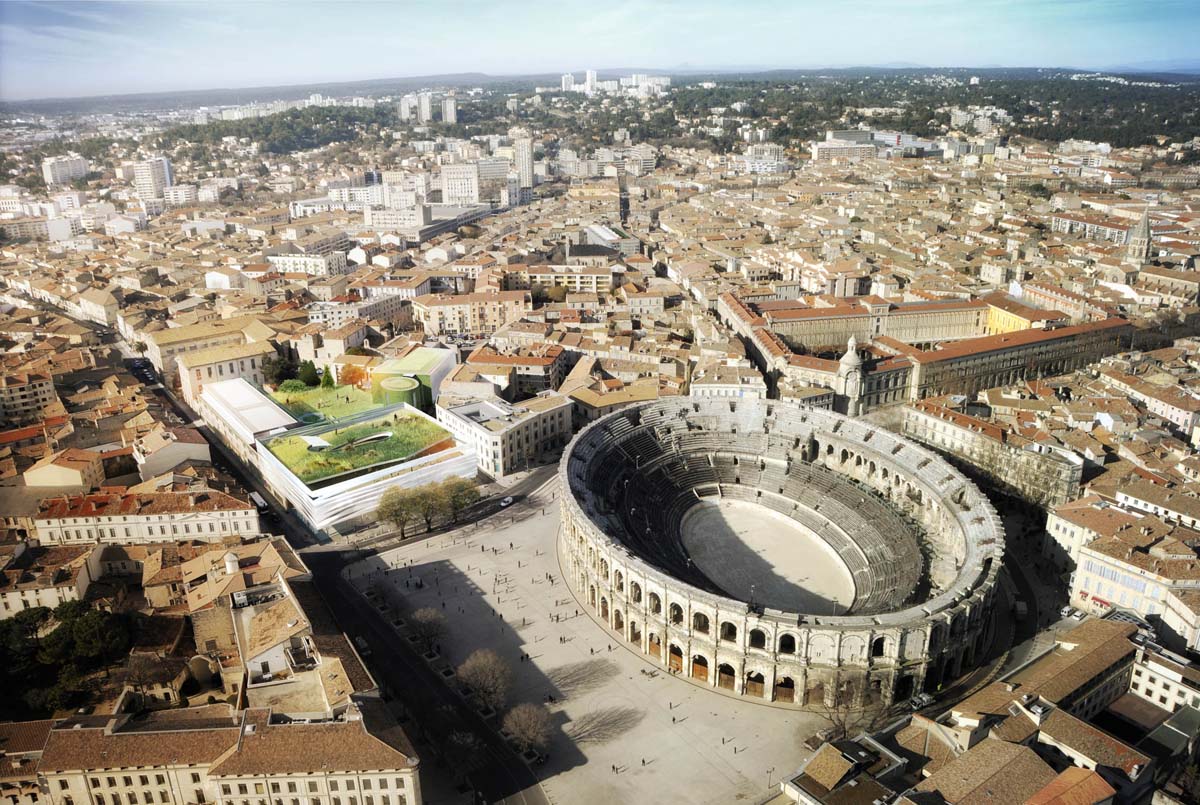 The Feria was created more than 50 years ago. Nîmes’ sense of party is still strong...

Created in 1952, it is still today the highest point of the festivites in Nîmes. In Nîmes, they live their passion twice a year. And as the more the merrier, the visitors are invited to have fun and share this conviviality...

For the Pentecost or the harvest, the bull worship is merely is pretext for festivities.

The sweet play of the vagues, the sandy beaches, the daily ballet of trawlers punctuates the life of this traditional and authentic fishing port, place for fans of sailing and watersports... Sweetness of Southern life. A real invitation to discover this region... 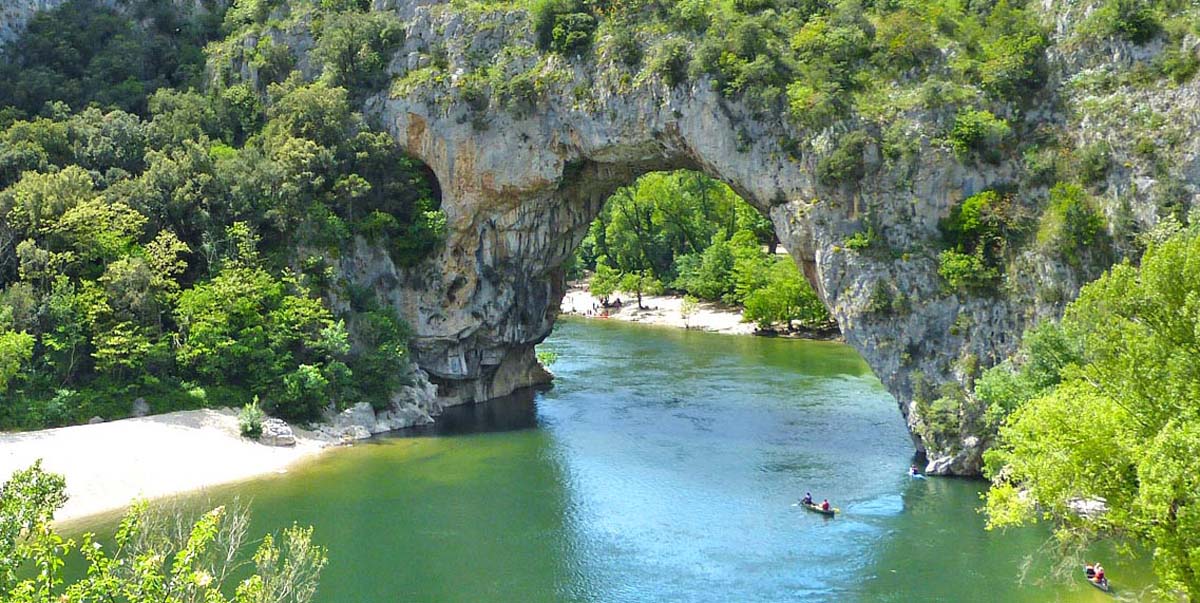 Come and relax on the beaches of fine sand. You can either enjoy beaches near the town center and Port Camargue, easy to access and close to the shops or the natural and free huge beach of the Espiguette, a protected and wild space.

This beach is classified as a natural site since 1998. Stretching over 10 km long and 700 m wide, the European blue flag atests to the superior quality of its bathing water. 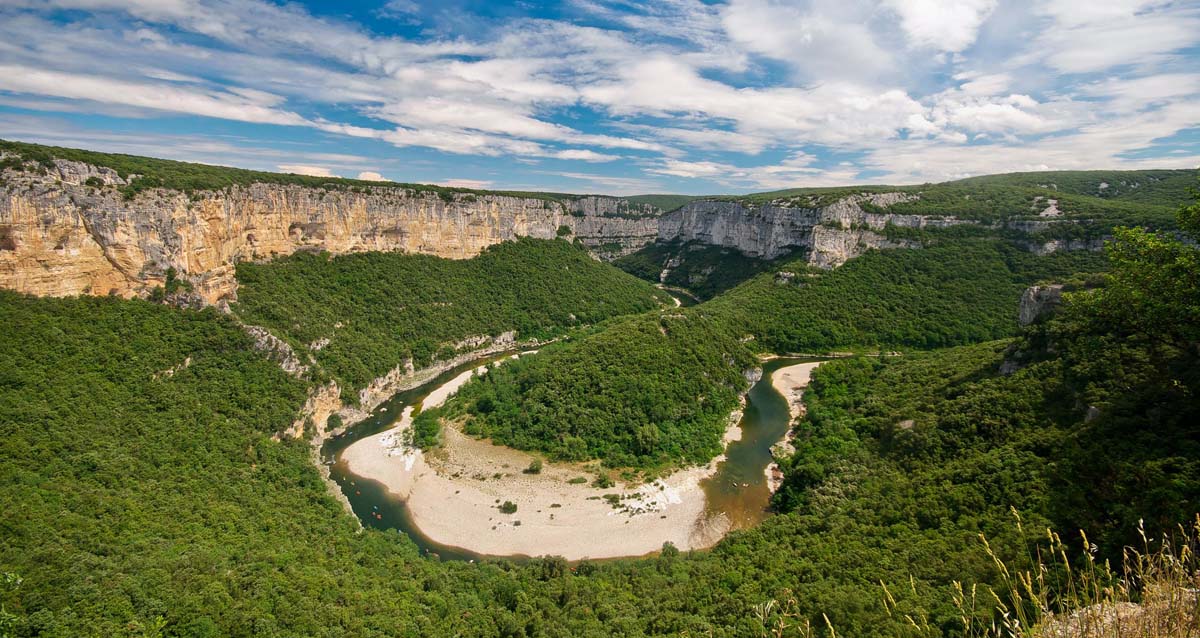 Last century, some families settled where the canal meets the sea via a channel, here called « Grau ». The Grau du Roi found its soul and its reason for being : fishing.

Today the Grau du Roi is the 2nd fishing port in French Mediterranean Sea. The ballet of the trawlers punctuates the life of the village. The loads are sold at auction. On the docks, the nets are being repaired while joking. You wander in the picturesque alleys. You are near the Mediterranean Sea... Authenticity has become here a second nature.

Since the dawn of time, the Rhône and the Sea shaped the landscape, sometimes together, sometimes opposing each other. Such an alliance gave a beautiful witness : Aigues Mortes, which is a succession of lagoons, swamps, channels, ponds, pine groves and dunes.

Life is organized in this maze, exchanges start to appear… As St Louis bought this territory in the Middle Ages, Aigues Mortes, once starting point for the Crusades became an important place in History. The city is still encircled by strong fortifications and Saint-Louis is celebrated each Summer with friendly sarabandes.

Fans of water sports, here the water, the land and the wind will give you the opportunity to oxygenate, to have your senses stirred, to be moved all over the year : sailing, windsurfing, kitesurfing, waterskiing...

See you soon in the Gard…