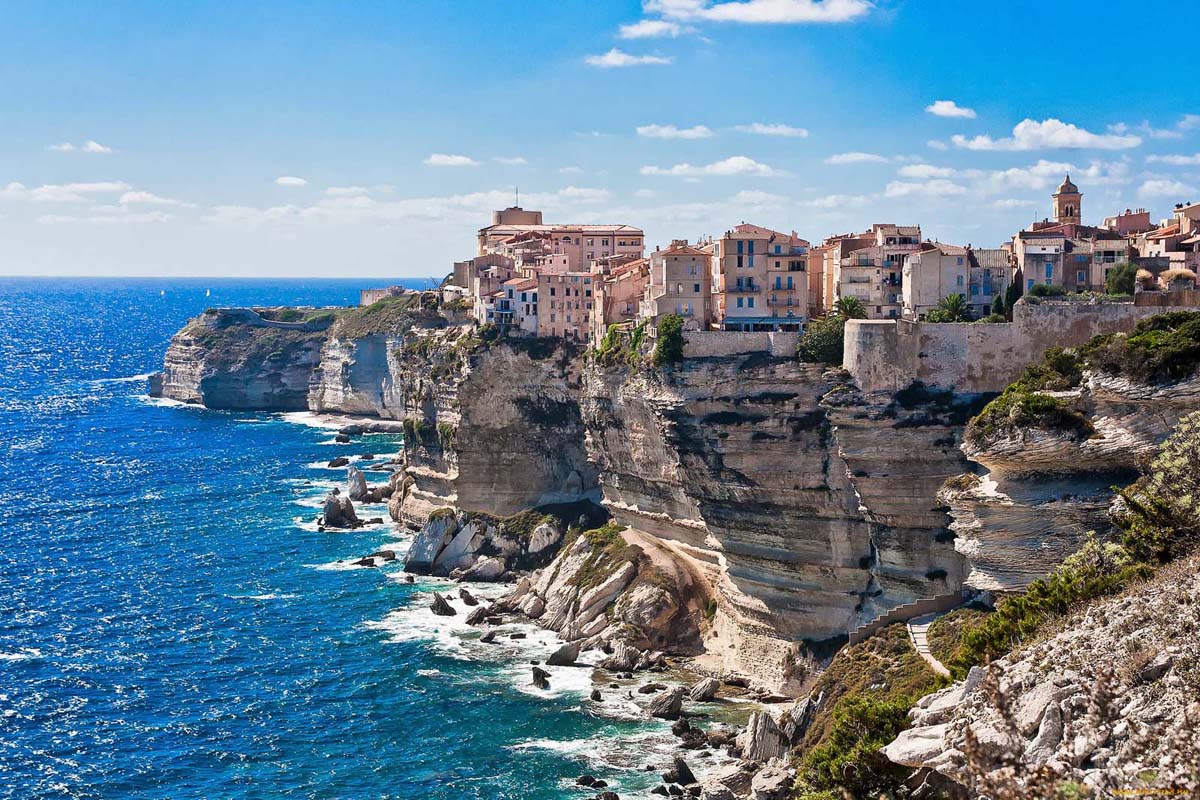 The island with  thousand faces

Named Kalliste, Cyrnos or Corsica, the island of beauty is famous since the dawn of time and it always fascinated the Mediterranean countries. It is today a real protective natural sanctuary for Mediterranean culture and architecture by the originality, richness and purity of its sites.

It was neglected for centuries, impoverished by the various babarian invasions, bled white by the Genoese, the Venitians and the Phoceans, the island managed to assert itself in the 18th century thanks to its maturity, and political and democratic freedom. The latter even influenced both the French and American constitutions (the American constitution is almost a word-for-word translation of the Corsican one).

Its religious architecture is famous worldwide for its numerous Romanesque chapels, the polychromatic decorations or the « barochetto », a baroque Art that reached its climax after centuries of sacrifices.

Benefiting from an outstanding climate, which gathers mild weather, sunny periods, dryness, severe precipitation events and winter periods, it gave birth to a unique fauna and flora. From its highest peaks to its coasts, the visitors are awed by the richness of this mosaic…

The island with its thousand faces always seduced men. It is easy to understand if you go to this important crossroad of Mediterranean civilizations, either to discover its culture, to practice sport or to relax. 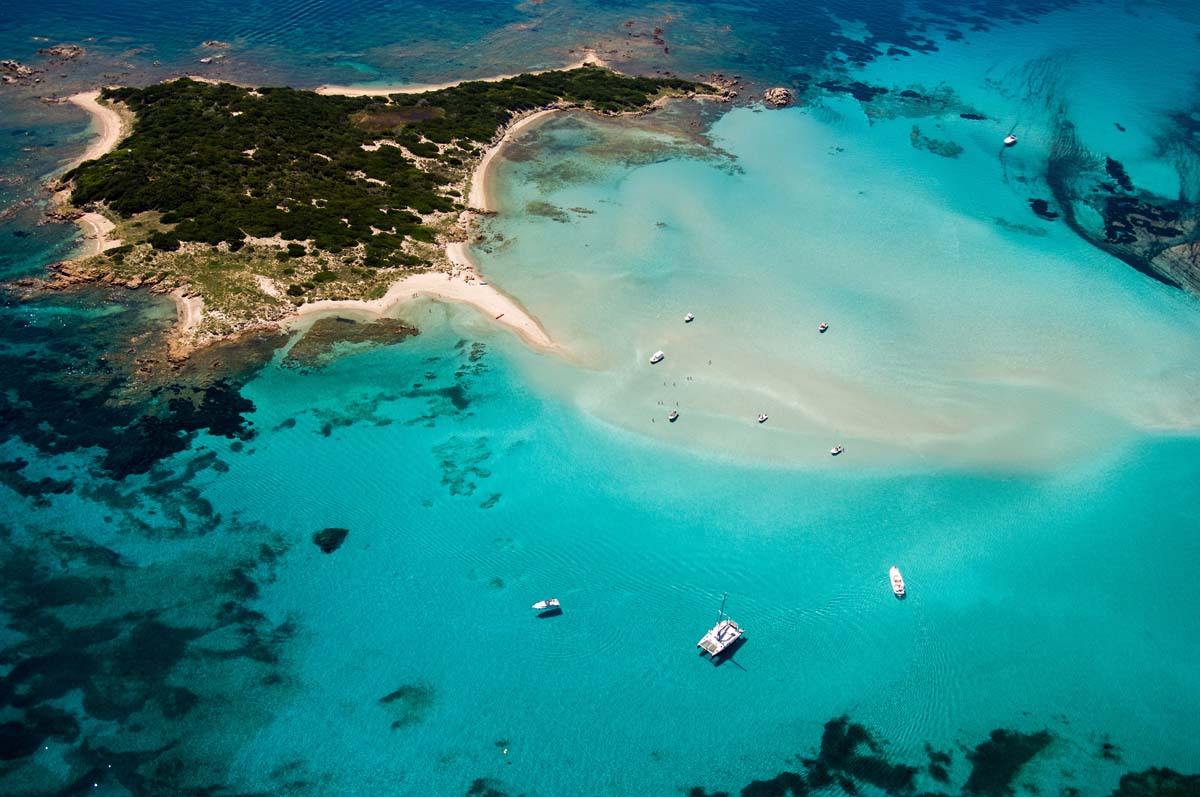 Wild and beautiful, Corsica is domitable and fascinating. Veritable land of legends fed by the blood of its martyrs, hidden in the bush, it has a very strong insular soul. Indeed, taking the bush has always been a second nature for the Corsican people who were over the centuries victims of barbarian attacks and Genoese violence… The island managed to incorporate the main pagan myths in its culture before embracing the Christian religion under the Genoese influence.
The island is deconcerting and surprises the visitors with the contrast of its rocks and its strong colors. These natural creations, shaped through centuries by erosion, cannot but catch the attention. The vegetation, the fragrant and impenetrable maquis, the extensive forests of secular oak and chestnut trees, these wonderful perfumes… All of this make this island a magical place…

Corsica has a pure and original shoreline with more than 1000 km of breathtaking coasts. From the red gulfs of Porto to the calanques of Scandola and Pianna (recognized as world heritage by UNESCO), we discover, with amazement: 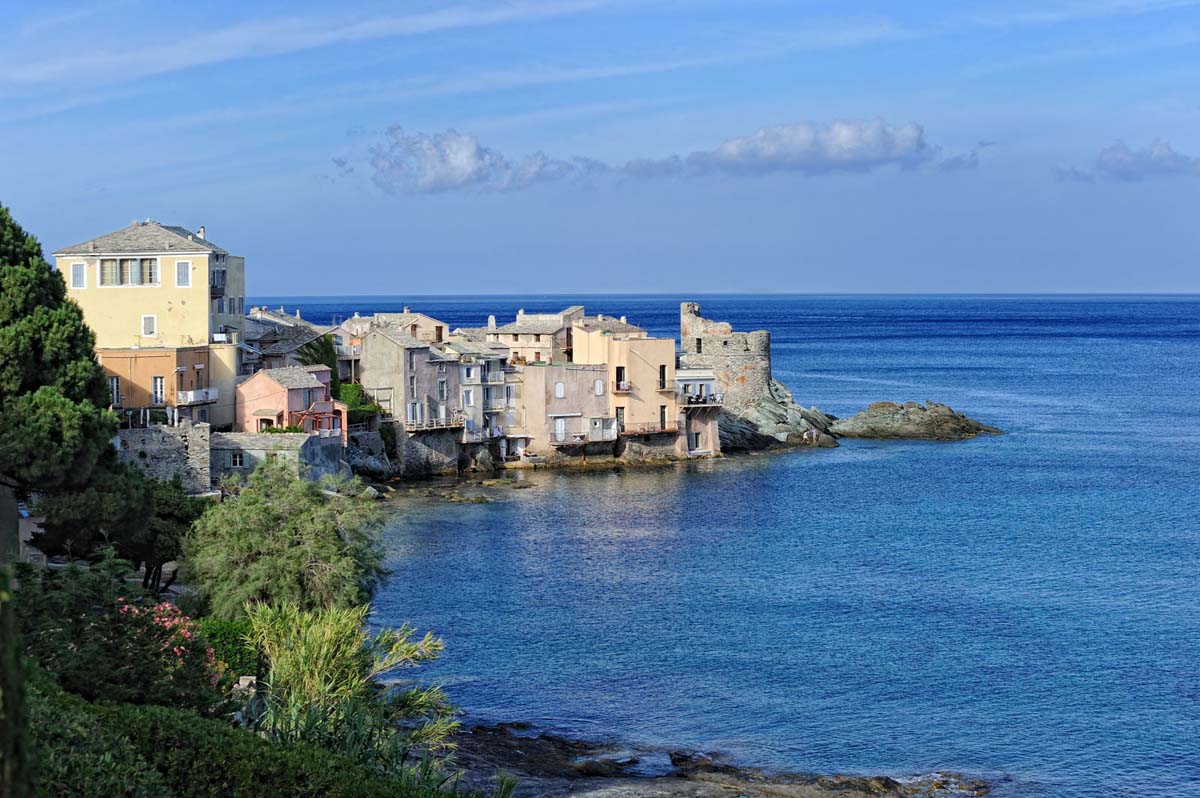 The « Cap Corse », generous land, which always arouses keen interest. Since the 9th century it became a fortress with 32 Sarracen towers, its fortified villages and its numerous castles. The religion also modelled the landscape with chapels, convents, Romanesque and baroques churches everywhere. It offers 80km of coasts of a deep blue and islands which creates a magnificent landscape. The “cap corse” is between a Riviera carved by the sea on the west side and a low and wild rocky coast on the east side. Many marinas and two tiny are huddled in the heart of this coastline where the scents of Rosemary,cistus, heather, arbutus and juniper are everywhere, watched by the Audouin’s gulls, cormorants, ospreys and endemic lizards.

Bastia, Queen of the Thyrrenian Sea, former Genoese capital city, rebel and untamed, the Haute Corse prefecture offers real pieces of baroque arts throughout the city. It is the French capital city. Front door of the island, it has a one-of-a-kind architectural heritage with its citadel, its master houses, squares and numerous churches. This is a unique, inimitable Mediterranean city, welcoming and exuberant, situated on the edge of the Tuscan strait. 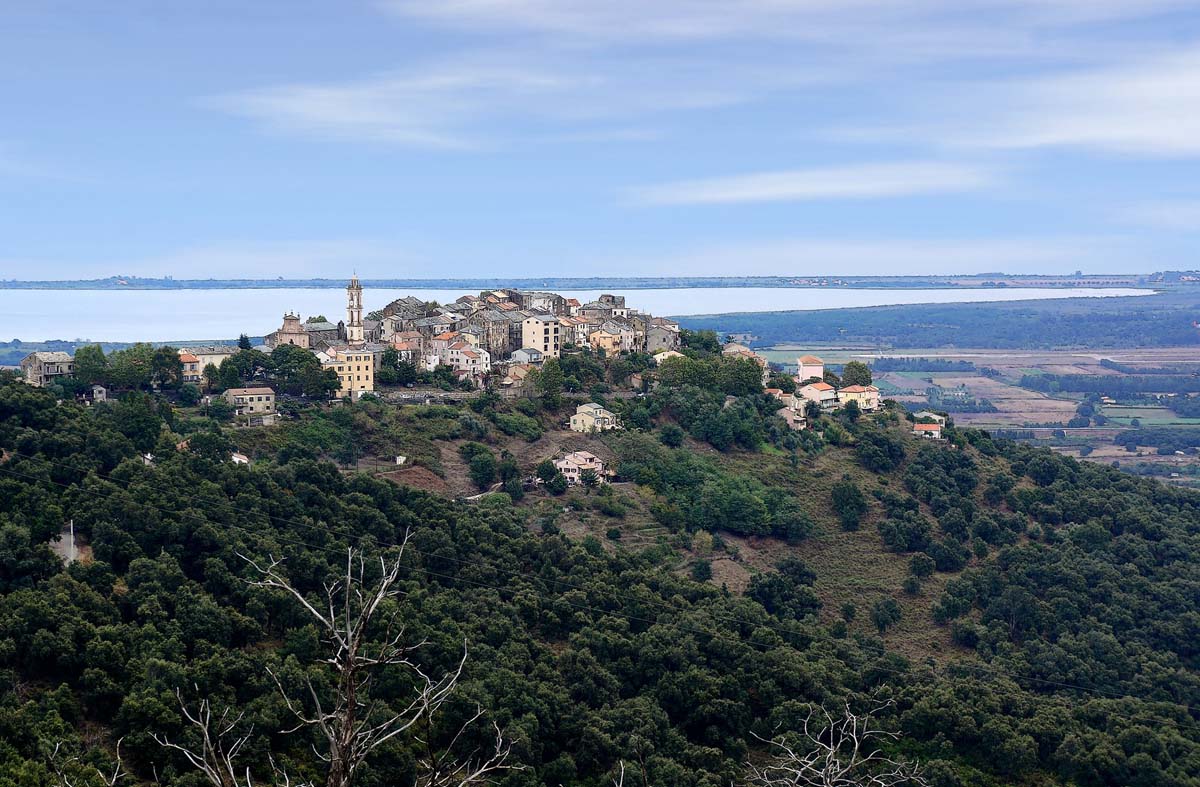 Lucciana, this village is a fortress built because of invasions and the destruction of the roman city of Mariana as the populations living near the sea had to flee to the steep hills. This village has a rich heritage with its ancient walls and its beautiful church St Michel as well as the « La Canonica » cathedral and the church San Parteo, marvelous example of the Roman and Pisan architecture. Real museum, conservatoire of traditional architecture in Corsica, it is the place where ancient and modern Corsica meet.

Moriani is situated on the Costa Verde. It offers varied landscapes and a spectacular view on the Tuscan archipelago and a very rich cultural heritage with Romanesque, Pisan and baroques churches and chapels nestled between turquoise sea and green hills. 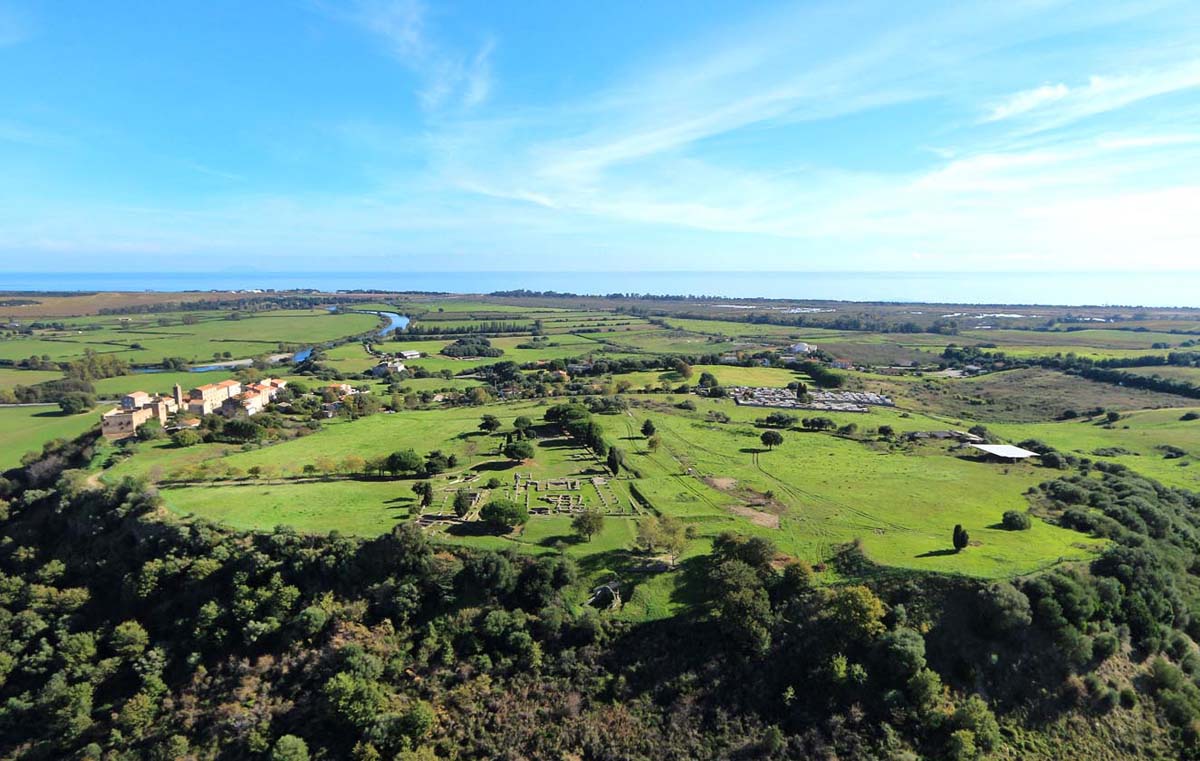 Aléria, favorite city of the Roman emperors, this major European archeological site is a melting pot of the main Mediterranean civilizations : Greek, Etruscan, Carthaginian and Roman. Founded in 565 BC by the Phoceans, this ancient commercial harbour, formerly known as Alalia (renamed Aléria in 259 BC) was the centre for the exportation of the Corsican products (wood, skins, wax, cereals, oils, wines). 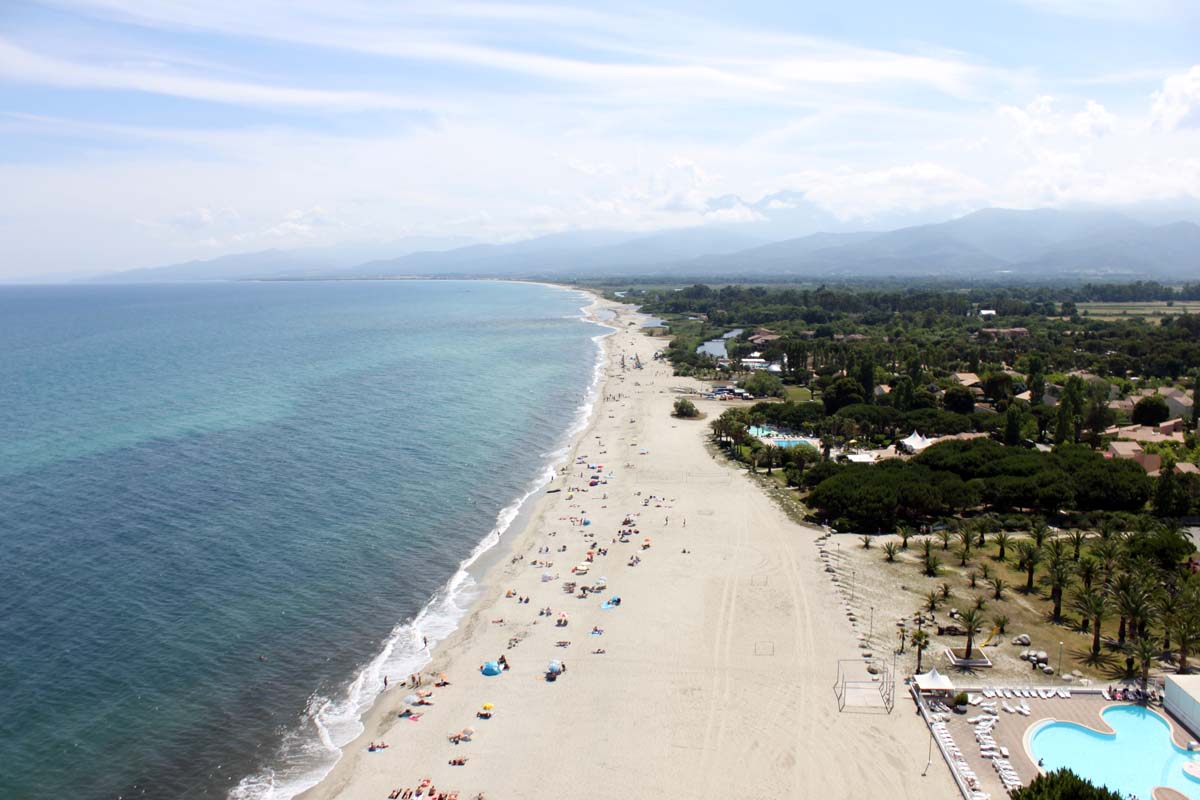 Ghisonaccia is surrounded by a veritable garden. The town has a huge beach of yellow sand, Vignale, and many ponds where oysters and mussels are cultivated for centuries. Land of resistance and country of bandits of honor, the wild Fiumorbo, difficult to reach awaits you… 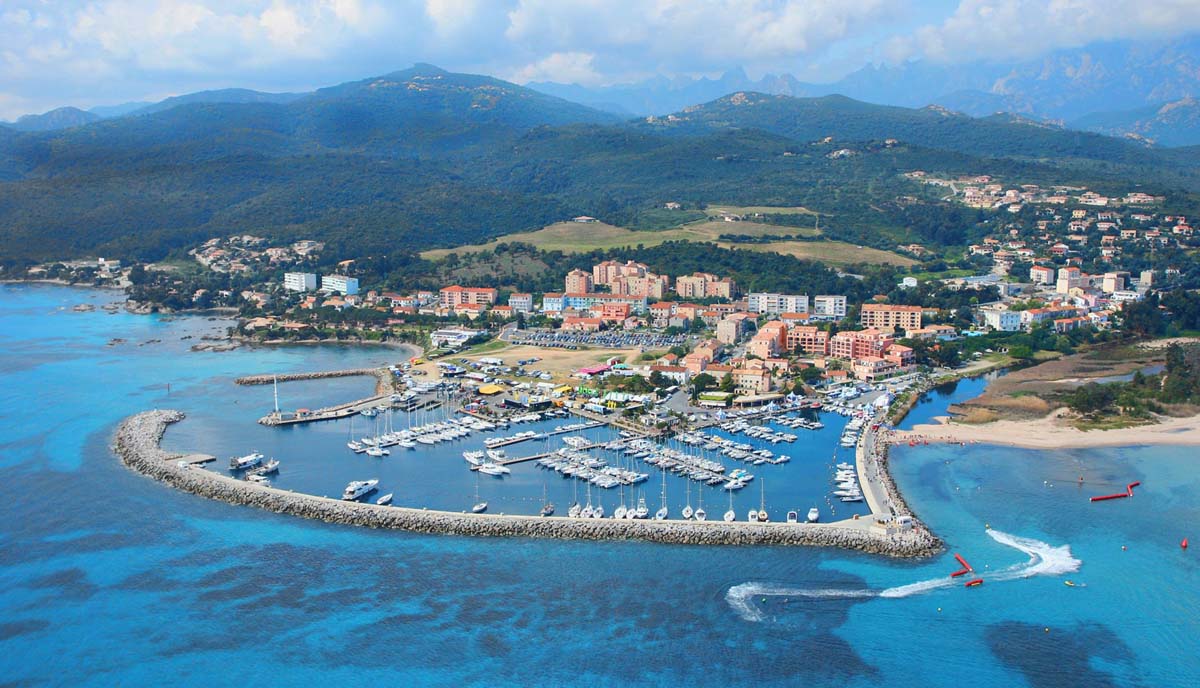 Solenzara is an  idyllic place, elegant and modern with more than 450 harbor rings including for the passage. This town is nearly a compulsory visit when you are on the island. Further Souths, the Côte des Nacres (pearl coast) has idyllic coves with sublim beaches of very fine white sand : Cannella, Favone, Cavu, Fautea.

Porto-Vecchio, third city of Corsica, histority town and marina, it is one of the most beautiful sites on the coast of the island. Its white sandy beaches are among the most beautiful of the Mediteranean Sea : Palombaggia, Cala Rossa, Santa Giulia, San Ciprianu, Pinarellu. Porto-Vecchio is also the entrance door to Alta Rocca, Ospedale forests or Bavella needles. Its surroundings are crammed with archeological sites, vestiges of the strange Toréen civilisation. 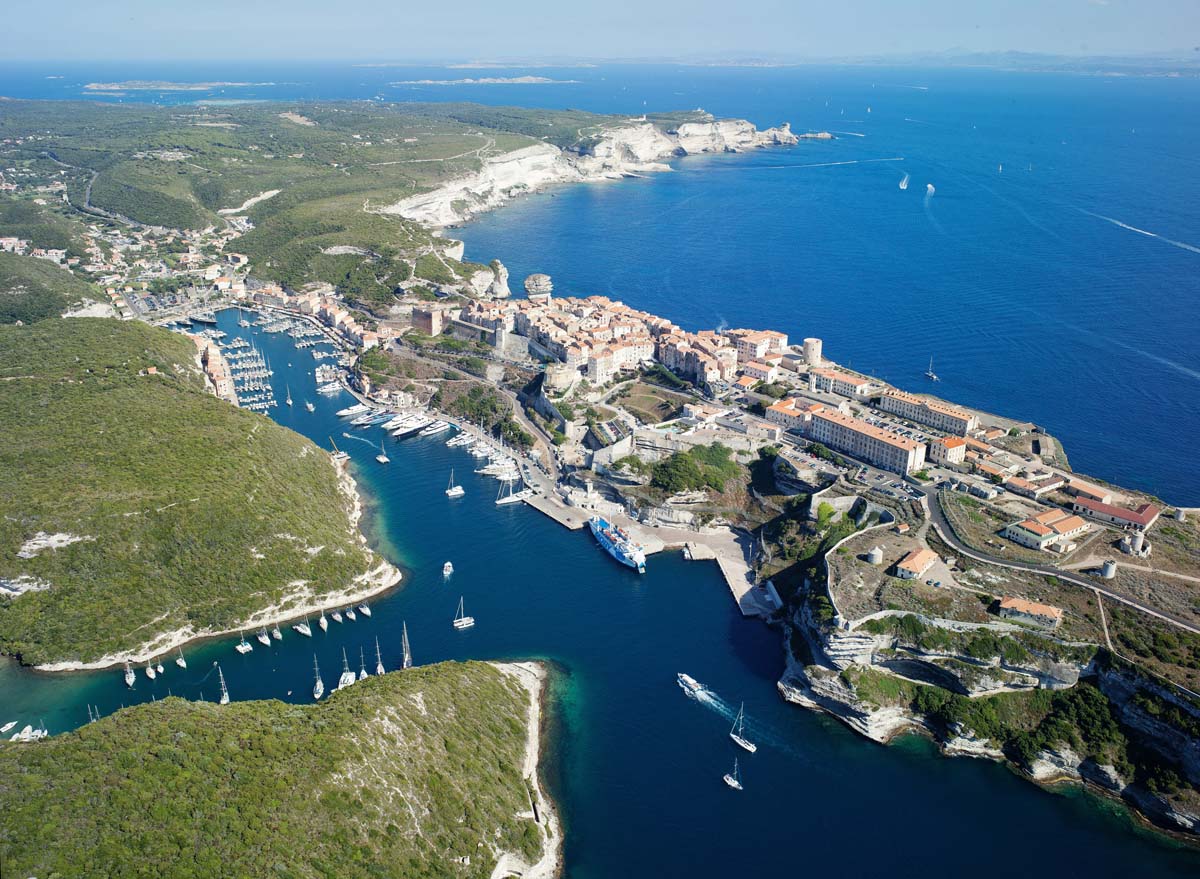 Bonifacio is a crossroads of civilisation and influence. This ancient Genoese citadel perched on a 70 m high rocky spur offers a breathtaking view. Today, beaches, caves and a wonderful gulf in Spérone as well as the islands of Lavezzi and Cavalo (forbidden as reserved for international jet-setters) are the traces of its History. 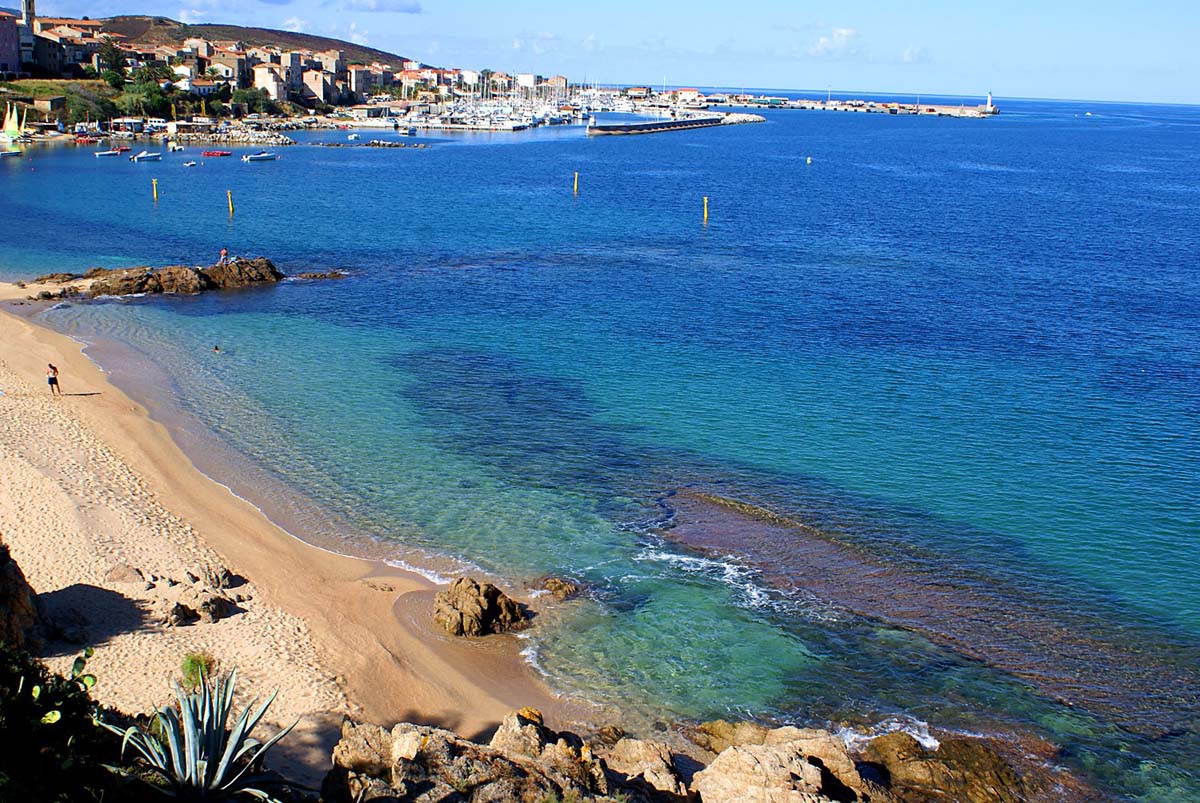 Propriano is a marina which expanded since 1960 thanks to tourism. It is nestled in a gulf which area is both green of its bush hills and ochre of its colored houses. It is today considered to be the lung of the big Valinco. The town has managed to take advantages not only of its beaches but also of this gorgeous natural setting. This town is a light, an atmosphere and a one-of-a-kind color… 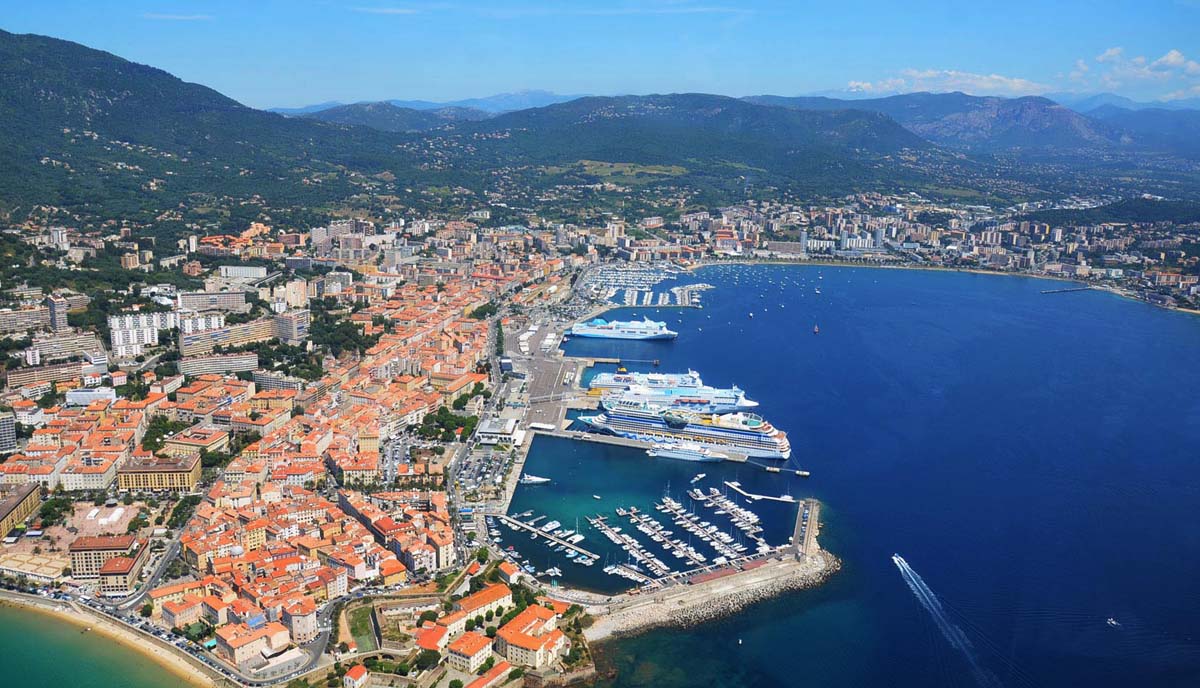 Ajaccio, town of Art and History, most livable city, where artists and painters love to be. Ajaccio reigns over the deepest and most opened gulf of Corsica, facing the Iles Sanguinaires, the imperial town provides many sublime beaches. Birth place of Napoléon the 1st, the shadow of the Emperor is everywhere. It overlooks a world famous gulf made of granite colors, the lightness of its white sand beaches and the exceptional blue color of its waves. Chief town of the department of South Corsica, its tradition of welcome makes it a place to be visited in the island. 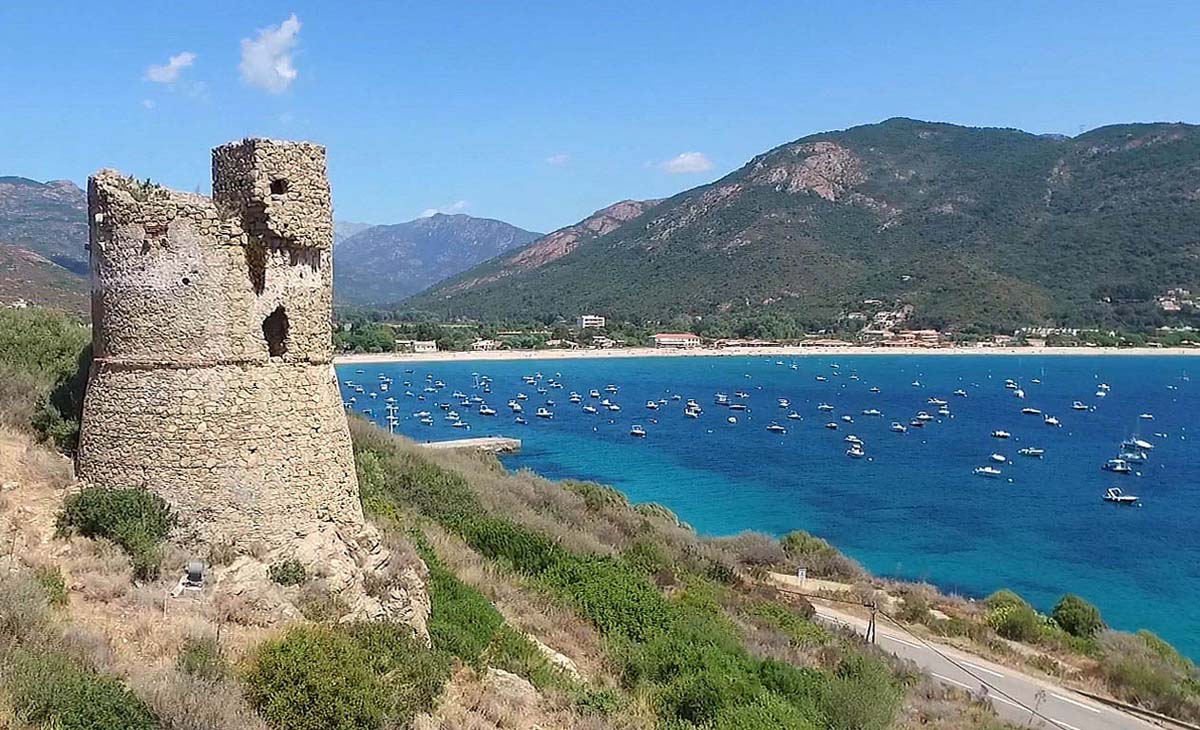 Sagone, ancient Roman port which vestiges lies in a deep gulf. It stretches along a superb beach hidden in a creek surrounded by wild and steep hills. Ancient prehistoric site where beautiful menhirs and thermal baths can still be seen. 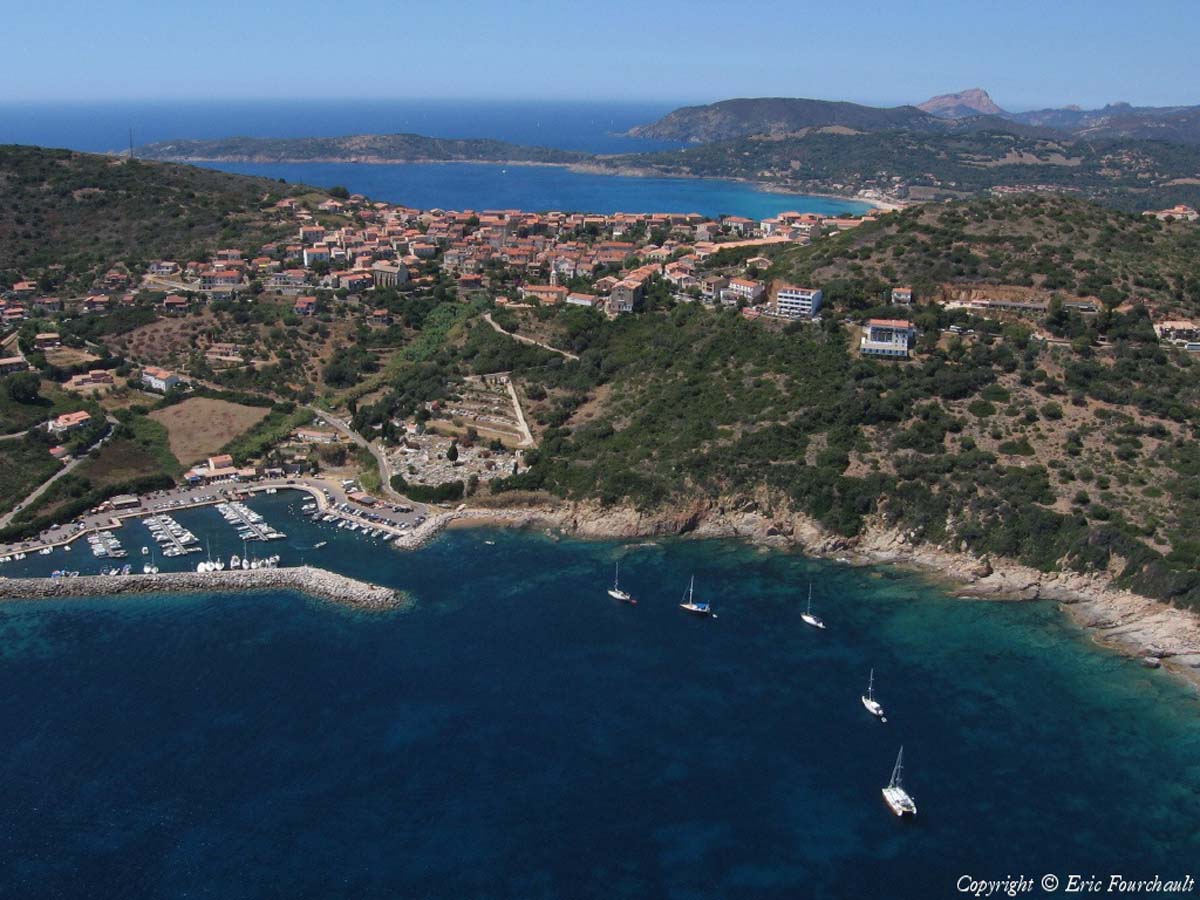 Cargèse, ancient Greek city, this picturesque town is an original mix of western and eastern Mediterranean civilizations with its white walls, five superb beaches of fine sand, and two churches (Latin and Greek).

Piana and its « Calanques du Diable » (Devil calanques) are nestled in the fabulous Theater of grey granite of Monte Cinto. It contrats with the red granite of the calanques, this lovely village  is 348m above sea level. Master houses with bright façades are next to the remarkable steeple of the 18th century church Ste Marie Majeure. The contrast between the sunny shores and the blue of the lagoon and the snowy mountains is striking. This place is magic as the erosion carved rocks for centuries, today they look like natural sculptures with red, brown and orange colors. Many paths can be used to go to the calanques classified as a world heritage by the UNESCO.

Porto and its « Golfe Rouge » (red gulf) classified as a world heritage by the UNESCO, is a small touristic place situated on one of the most sublime site in the Mediterranean Sea. Its red stone-built houses and their tile roofs add fiery accents to the landscape while amazing sunsets to be seen. The Aquarium de l’Aquarium de la Poudrière, the Aïtone forest and its waterfall are also to be visited. 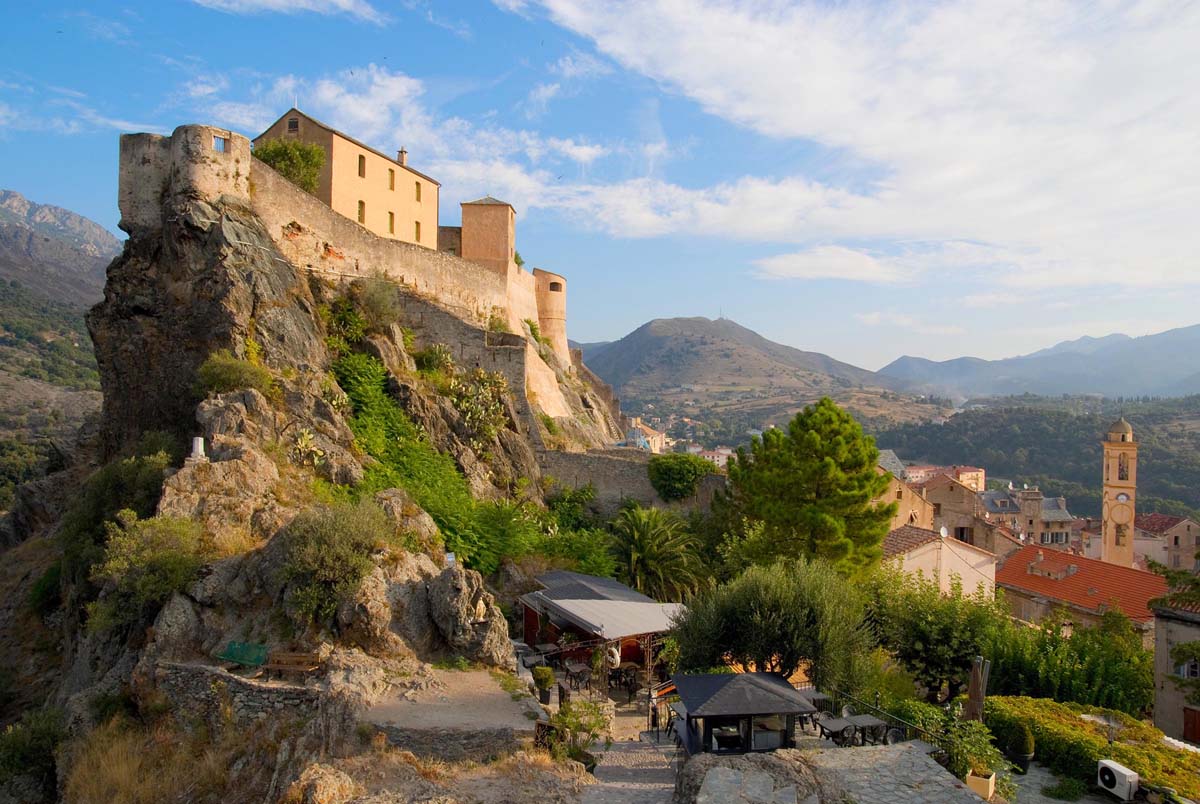 Corte, entrance door to inner Corsica, is the meeting point between Bastia   and Ajaccio. Situated on the GR 20, this capital city of the independent Corsica is inhabited by the souvenir of JP Gaffori and Pascal Paoli was the cradle of the Corsican democracy in the 18th century.
It is an open window on internal natural spaces (with the Asco, the Alta Strada, the Restonica, and the Kalisté). These mountain pastures, high mountains and shepherds, especially in Corte Vizzavona, which mixes the green of its forests and its gigantic trees and the blue of its rivers, waterfalls and basins.

The « Centre Corse », (Central Corsica) is a crystalline land which stretches over the two third of the island of beauty. It offers visitors 40 glacial mountain lakes (Nino, Melo, Capitello, Creno, Bastani…) as well as rich forests. This backbone over the highest peaks, Monte Cristo (2706 m), Monte Rotondo (2622 m), Monte d’Oro (2389 m) is a real dividing line between the two Corsican shores. 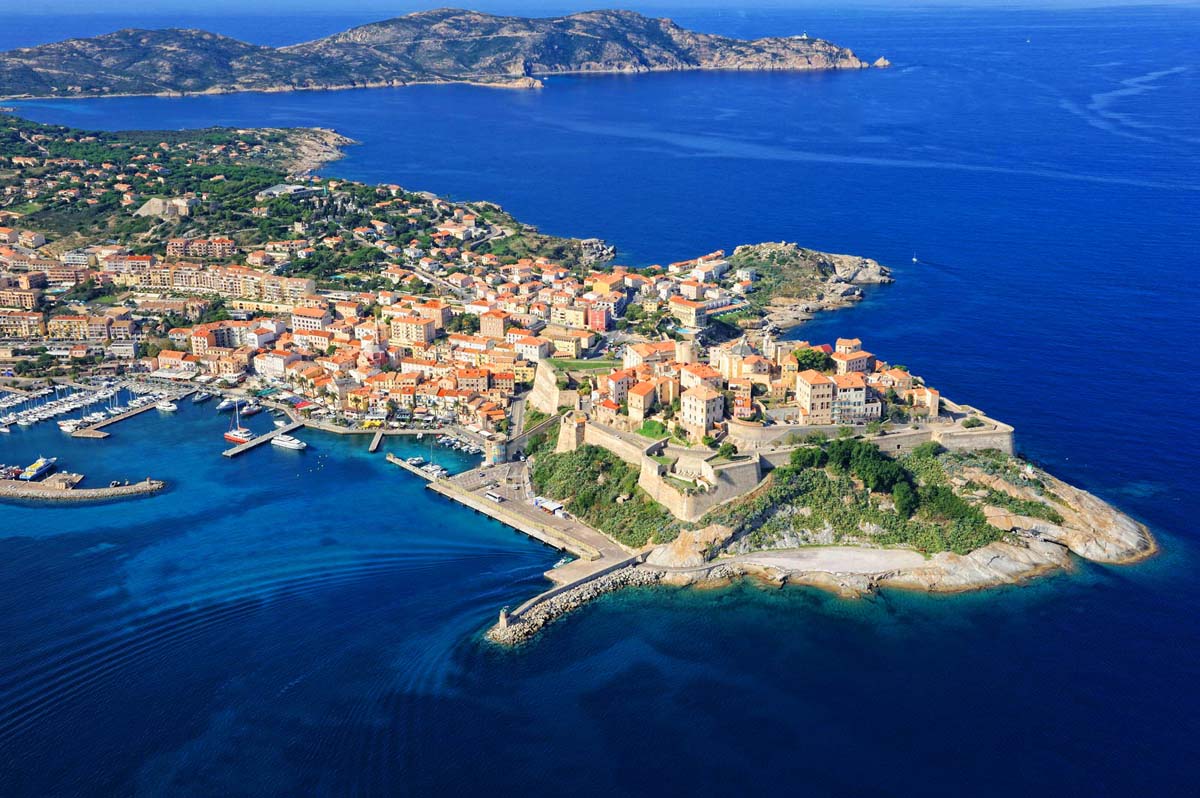 Calvi, hidden away in a magnificent gulf, leaned against a granite acropolis, it is the Corsican city par excellence. It combines the charm of the old stones of its citadel and the beauty of its sea to its gorgeous snow-covered high mountains. The 13th century citadel built the Genoese overlooks this treasure of Balagne, extended inland with forests of pine trees, eucalyptus and mulberry trees. 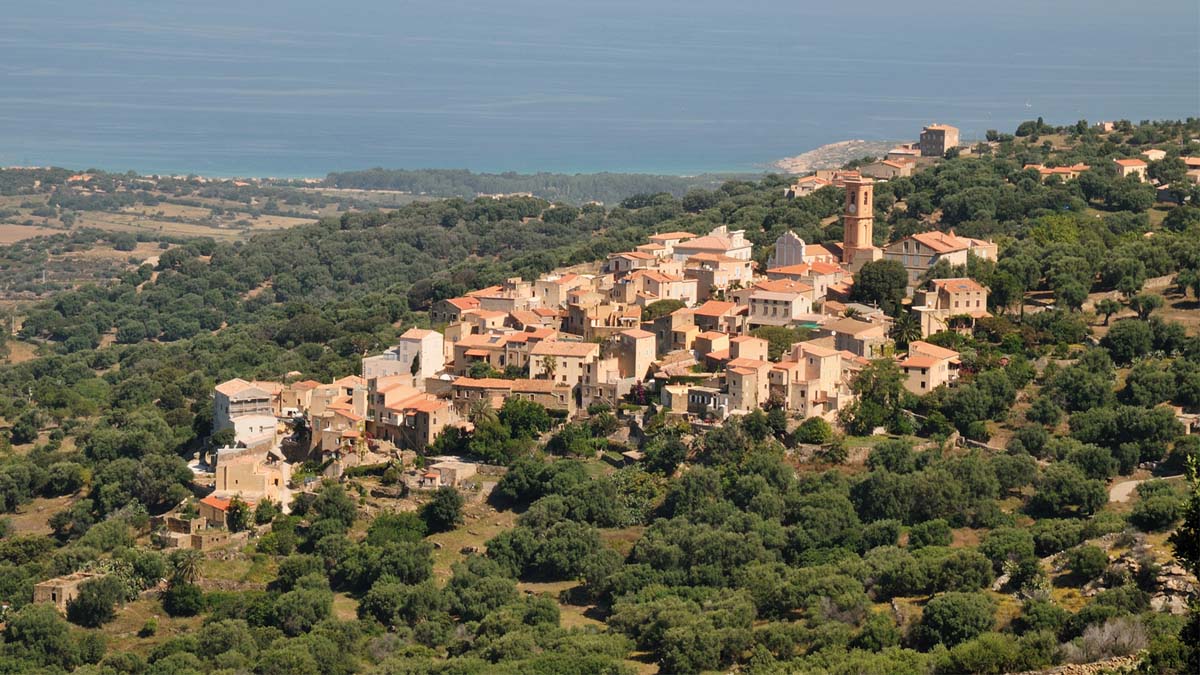 Calenzana, this major place of Corsican history and gastronomy is famous for its specialties : honey, sweets, pastries and white wines. With vines, almond and olive trees, the land is fertile. It is today a fundamental step for hikers as it is the starting point of the GR 20 and of the Mare a Monti which goes to Cargèse. 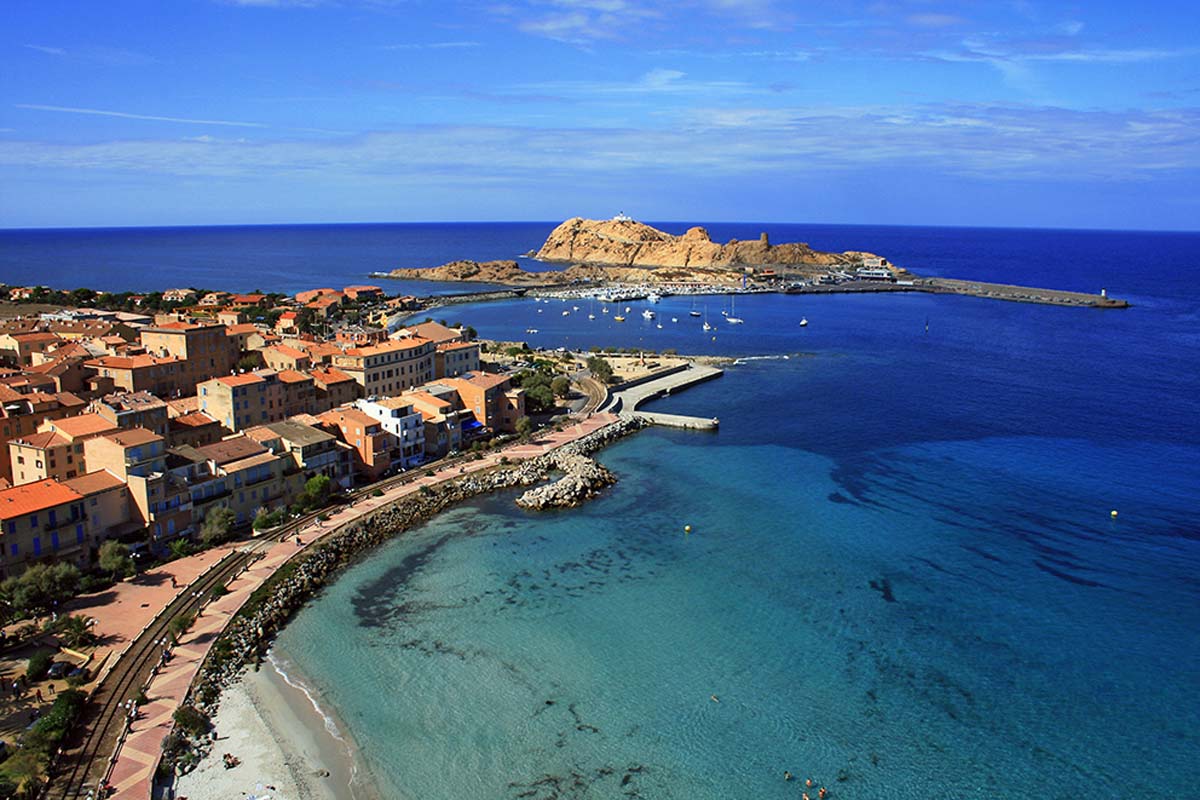 The « île Rousse »(the red island), entrance door to the Balagne is an elegant seaside resort, visitors will be offered the vestiges of an ancient Roman city as well as a Genoese tower which overlooks the “île de la Pietra” linked to the town by the harbor pier and an ochre rock. Created in 1758 byr Pascal Paoli in order to compete with Calvi, it is today the mirror of the 18th century Corsica with its checkerboard-cobbled streets. 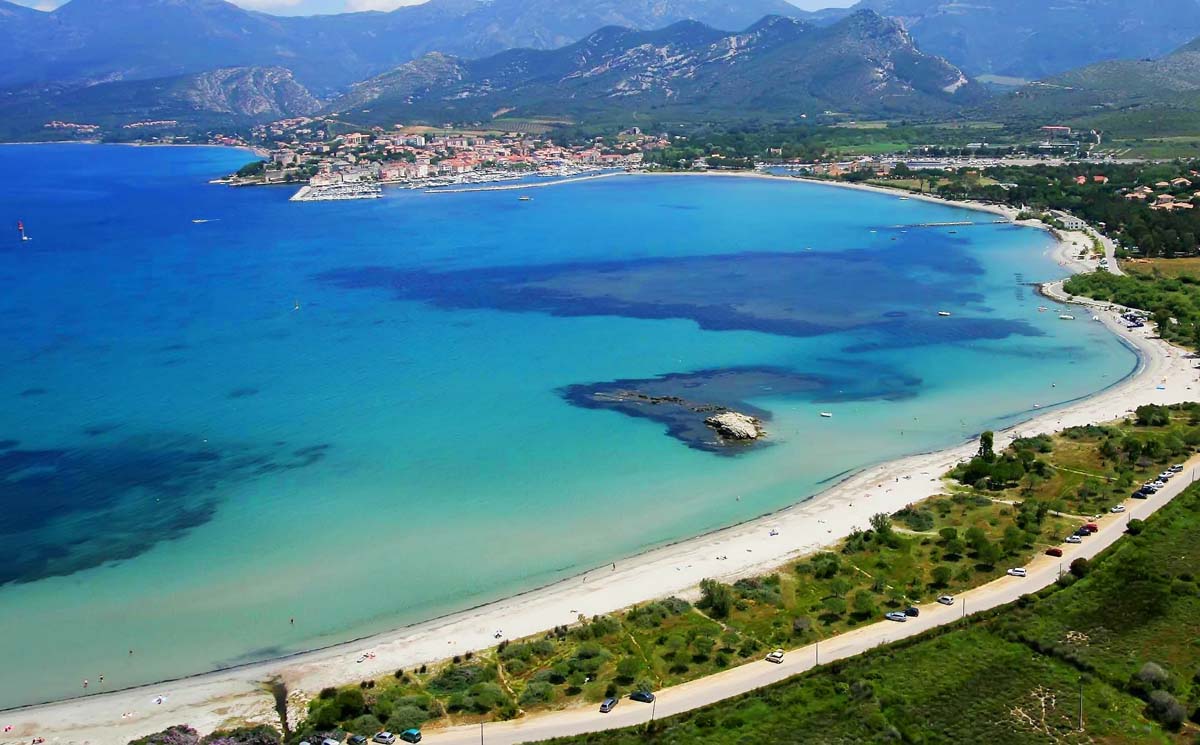 St Florent, treasure of the Nebbiu, antique Roman city. This first Coriscan marina is one of Mediterranean’s leading tourist destinations. Wonderful city which houses swim in the sea, it becomes alive in the high season and becomes a Corsican St Tropez. To be seen : its citadel and Genoese square, the antique Nebbio cathedral, Ste Marie cathedral and the village of Patrimonio renowned from ancient times for its wines.