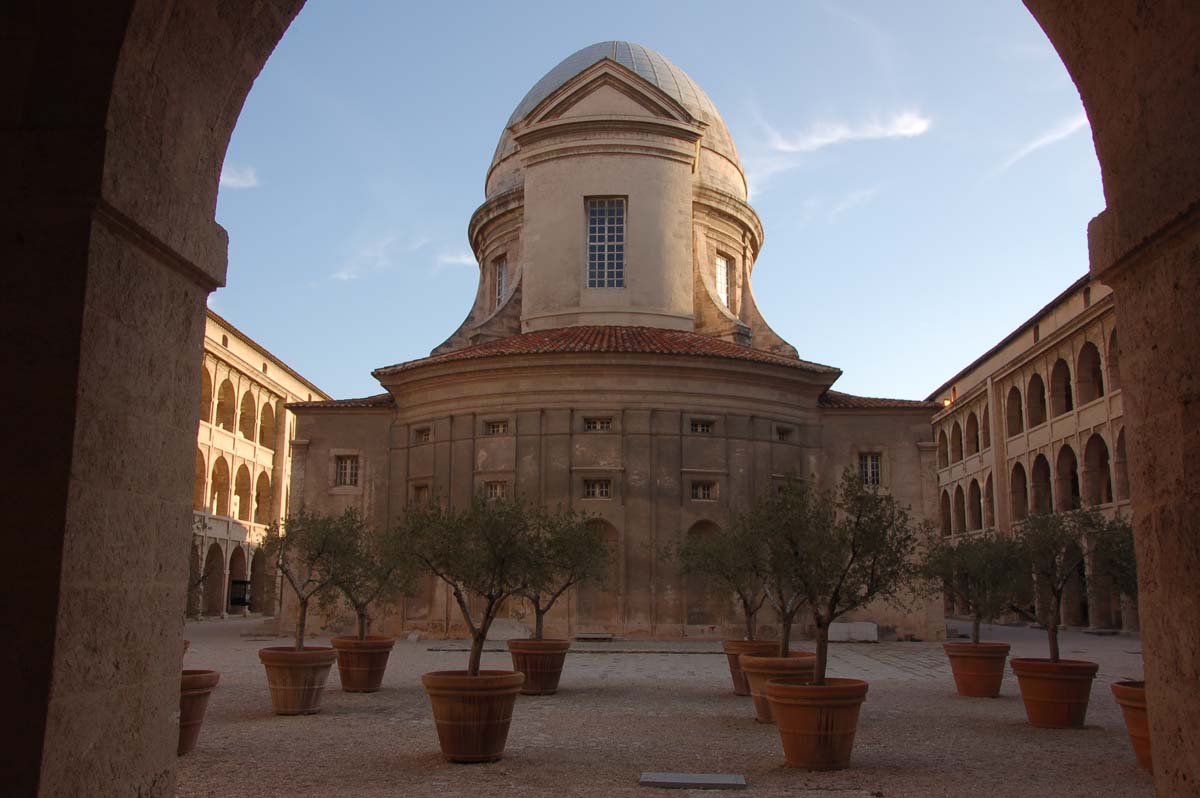 Situated in the heart of the Panier, near the Grands Carmes. It is a 17th century building designed by Pierre Pugetto which shelters the poor and the needy ; it corresponds to the implementation in Marseille of the “grand renfermement” that Michel Foucault highlighted in his “Histoire de la folie à l’âge classique” (1962). (Insane must be locked up) 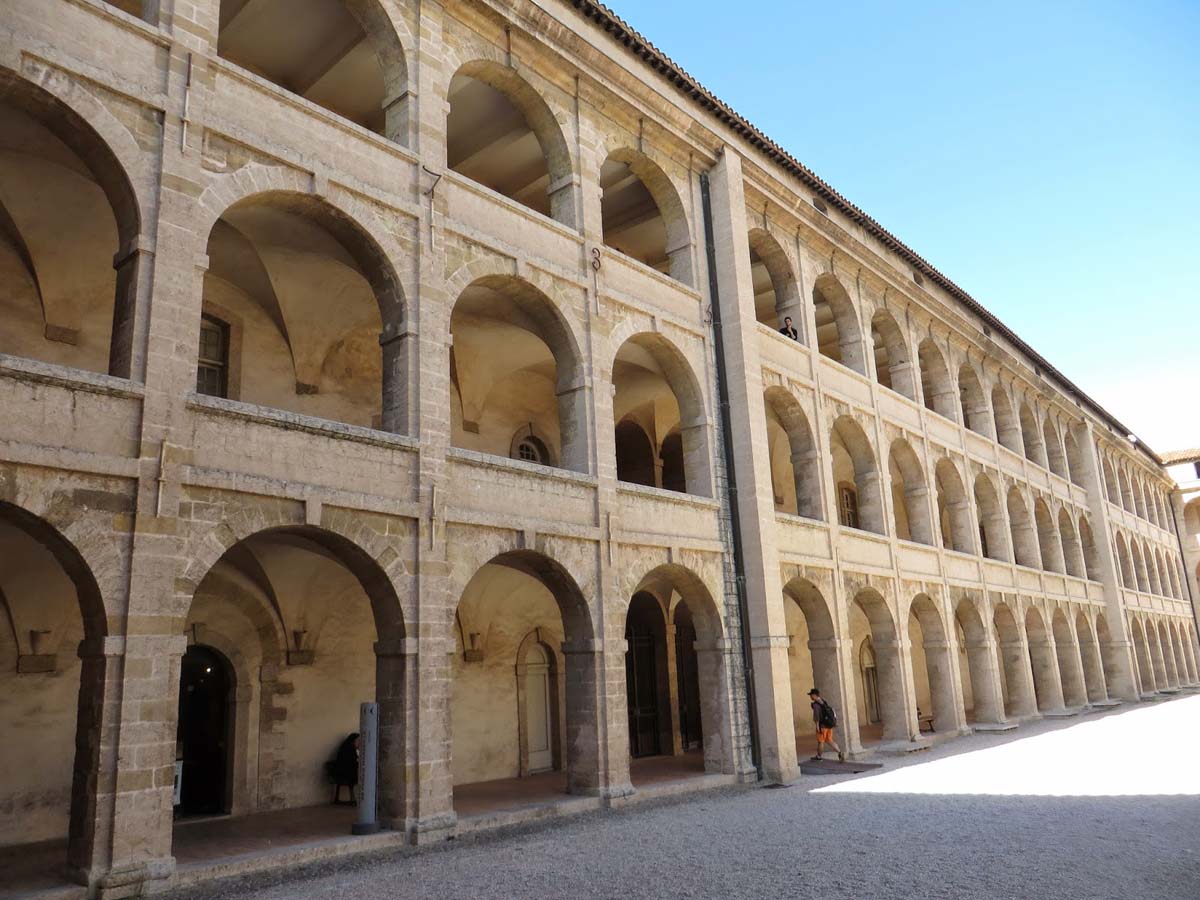 On the order of the Royal edict on confinement of the poor and needy, Marseille city’s council decided (8 th of December 1622) to confine the poor who were born in the town. A piece of land has been available, near the cathedral la Major, square of the Observance.

Puget’s project (he was born in the area) was chosen in 1671. Despite the financial problems encountered, the north wing construction began. Pierre Puget, died in 1694 and didn’t see the church finished (1704). All the buildings were finished in 1745, conducted by his son, François.

The building, built of pink and white stone (the « molasse ») from the quarry in Couronne (village at the North of Marseille, near Martigues), is composed of 4 aisles entirely closed forming a 112 meters by 96m rectangle. There are 3 superimposed galleries opened by means if arcades on an inner courtyard. In its center, the superb chapel, topped by a baroque elliptical dome, which is typical of the architecture of that time.

The operation of the hospice was carried out in repression. Guards called « Chasse-gueux » (poor hunters) were in charge to capture the beggars: strangers were expelled, the Marseilles were locked up in the hospice. Guards were confronted with the population who espoused the cause of the beggars. The confined poors were employed in different manufactures, the children worked as domestics or apprentices for bakers or trimmings manufacter. In 1760, there were 1059 persons confined; however, the imprisonment of poors was less and less admitted, and this number decreased to reach 250 persons in 1781. 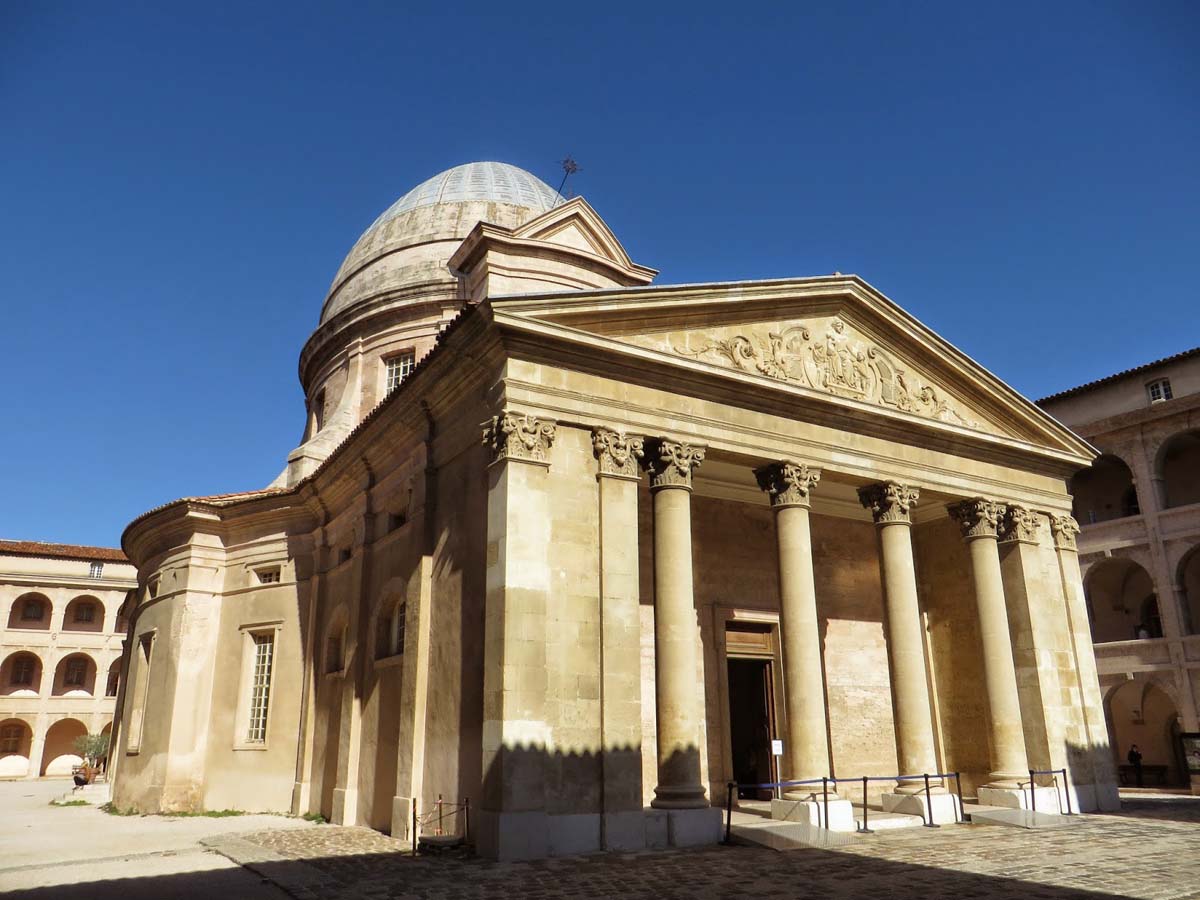 Shelter in the 19th century

A law in 1796 unifies all the hospital of a town under a single administration. The Charité hosts the old and the needy, until they are transferred to Sainte Marguerite, in 1890.

Decadence and renovation in the 20th century.

In 1905, the premises are made available for the Army. From 1922, they shelter des family evacuated after the war damages (around 150, hosted in appalling conditions). Around 100 Little sisters of the poor lived in the same conditions. Different activities were done such as bananas and anchovies packaging. Immediately after the war, Le Corbusier denounced the state of abandonment of this exceptional place.

On the 29th of January 1951, the building was classified as a historical monument. In 1962, zll the residents were rehoused and the building was closed. In 1968, funding was providing thanks to the culture minister, André Malraux. A vast program was launched to restore this architectural unit of great architectural and historical interests. The first stage of the renovation work ended in 1981 (renovation of the Chapel) and a second stage ended in 1986 (all buildings). 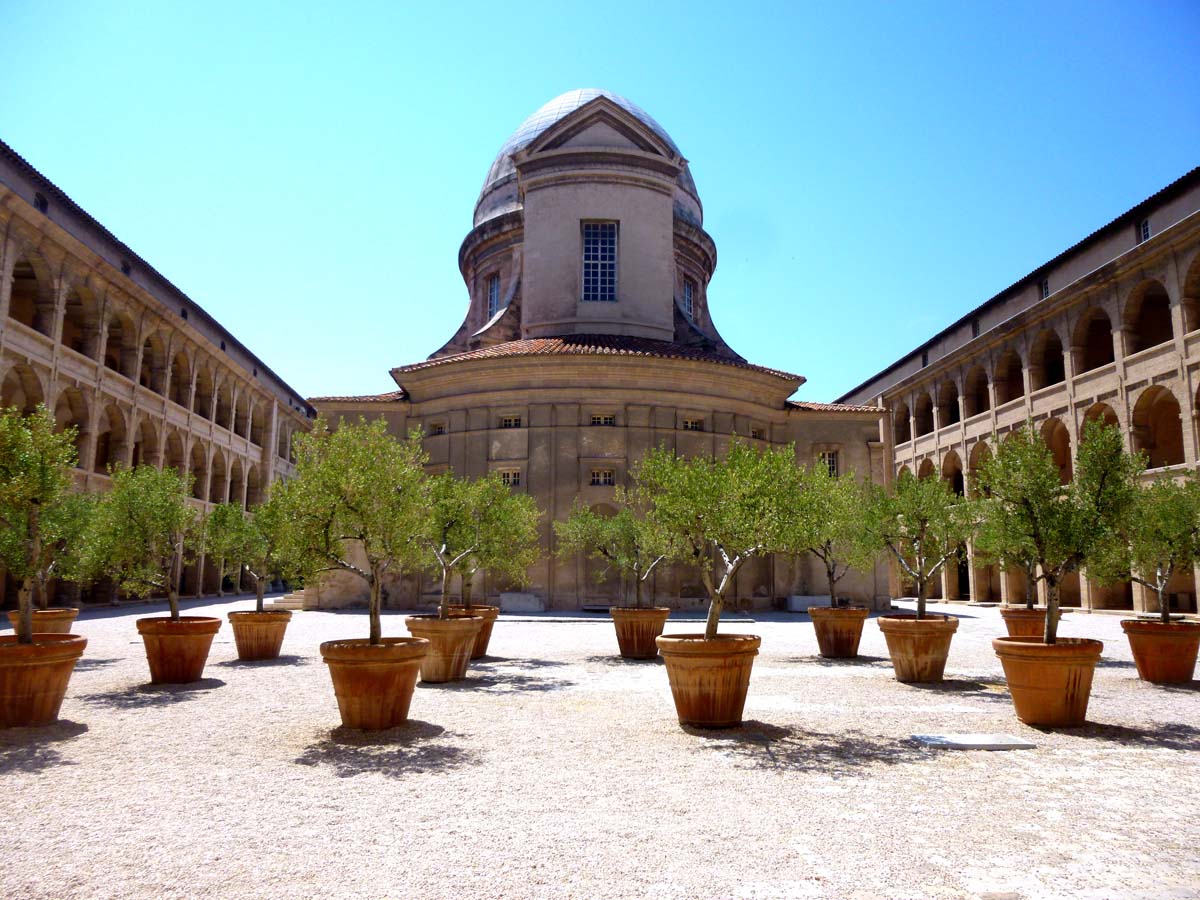 A cultural and museographical centre

Today, the centre of the Vieille Charité houses temporary exhibitions, as well as a library with a specific content
linked with the exhibitions, in a serene atmosphere. There are diverse cultural structures.

The museum of Mediterranean archaeology is on the first floor. It is composed of three departments: Egyptian antiquities, classical antiquities (Etruscan, Roman, Greek, Middle-East civilizations) and regional archaeology.

The museum of African, Native-American and oceanian Art is on the second floor ; it presents creations from these 3 continents.

Research institutions : on the first floor, le Centre de Documentation en Sciences Sociales (CDSS) open to the public, the EHESS regional pole (training from the Master), 2 research centers linked to the EHESS and the CNRS, in the University of Aix-Marseille and Avignon, the Centre international de poésie Marseille (CipM), which was founded in 1990.

There is a restaurant near the entrance of the site.