It is on one of the summits of the mound Saint Laurent, the Saint Laurent church is on the other summit. Between both there is a depression. 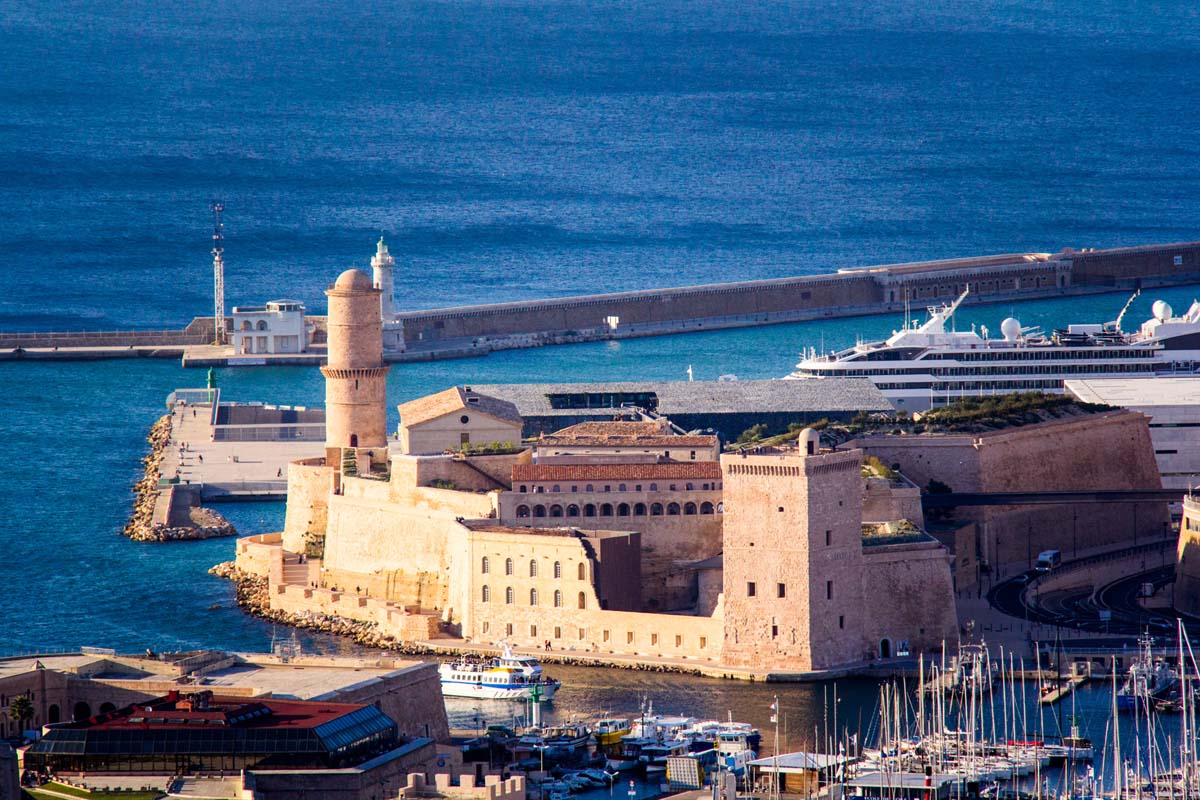 At the origin, on the 6th century AD, Greeks settled on this site (vestiges of potteries found as the MuCEM was built). After the raids by Saracens and Greek pirates (7th to 9th century), a fortified redoubt was built there to protect the population (the Château Babon, after the name of a bishop). Under these walls, the ordre militaire des Hospitaliers de Saint Jean de Jérusalem built the Commanderie.

To ensure the safety of the port, a chain was once used to close the port (about 100 m wide), in 1322. It played a security role until the King of Aragon, managed to enter with his galleys in 1423. The town was plundered and the chain was stolen and taken away as a trophy (It is still in Spain, in the Valence’s cathedral).
After this episode, King René built a tower with fishermen.

The Fort Saint Jean lies on the Tower of Roi René and includes the tower of the Fanal. Later, Vauban designed a flood canal, in the depression, between both summits of mound Saint Laurent. During the Revolution, between 1789 and 1793, the fortress became a prison for the Dukes and Princes of Orléans. Later, in 1929, the site is expanded with the embankment of the Fort and the J1, J2, J3, J4 Moles (former decks today rehabilitated).

During the second world war, the Germans occupied the fort. The explosion of their ammunition damaged the transporter bridge which was later dismantled, with considerable disappointed for the Marseilles. 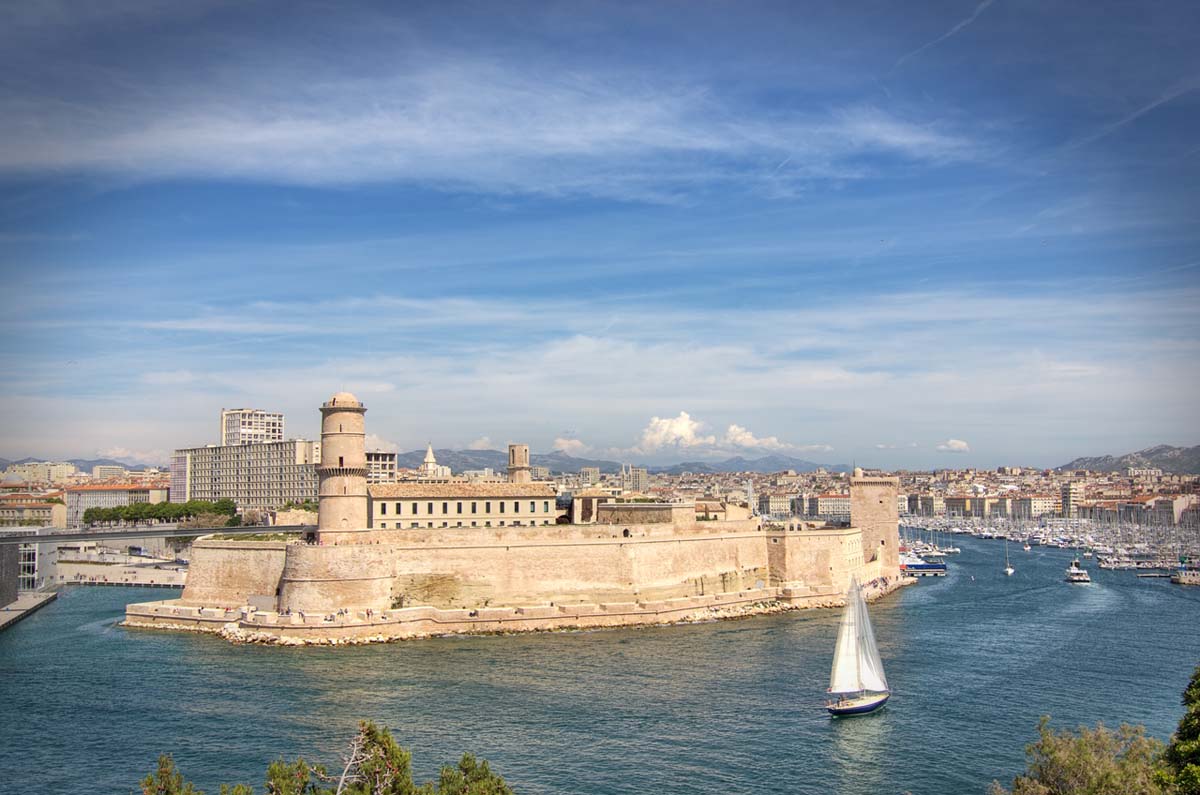 After the Liberation, the Fort was classified as a historical monument. The Tours du Roi René and the tower of the Fanal were restored and ironically enough, the German bunker became the Mémorial des Camps de la Mort (death camps memorial).

Today the Fort Saint Jean is linked to the MuCEM and to the Saint Laurent church via gateways. This place, facing the sea and the Grande Digue, became one of the tourists and inhabitants favorite places to walk.
The Fort Saint Jean is now a cultural place ; exhibitions and audiovisual shows are presented. The café du fort has a shaded terrace which is very appreciated.

Before leaving the site, come and admire the beautiful facade of the Intendance Sanitaire de Marseille (built in 1719), a few meters away from the Tour du Roi René and boats on the docks (it was used to prevent epidemics and to quarantine the boats if necessary) ; this health service didn’t avoid the 1720 plague to kill ½ of the population of Marseille and ¼ in Provence. Later on, instructions for draconian surveillance were put in place so that such a tragical event never happen again. 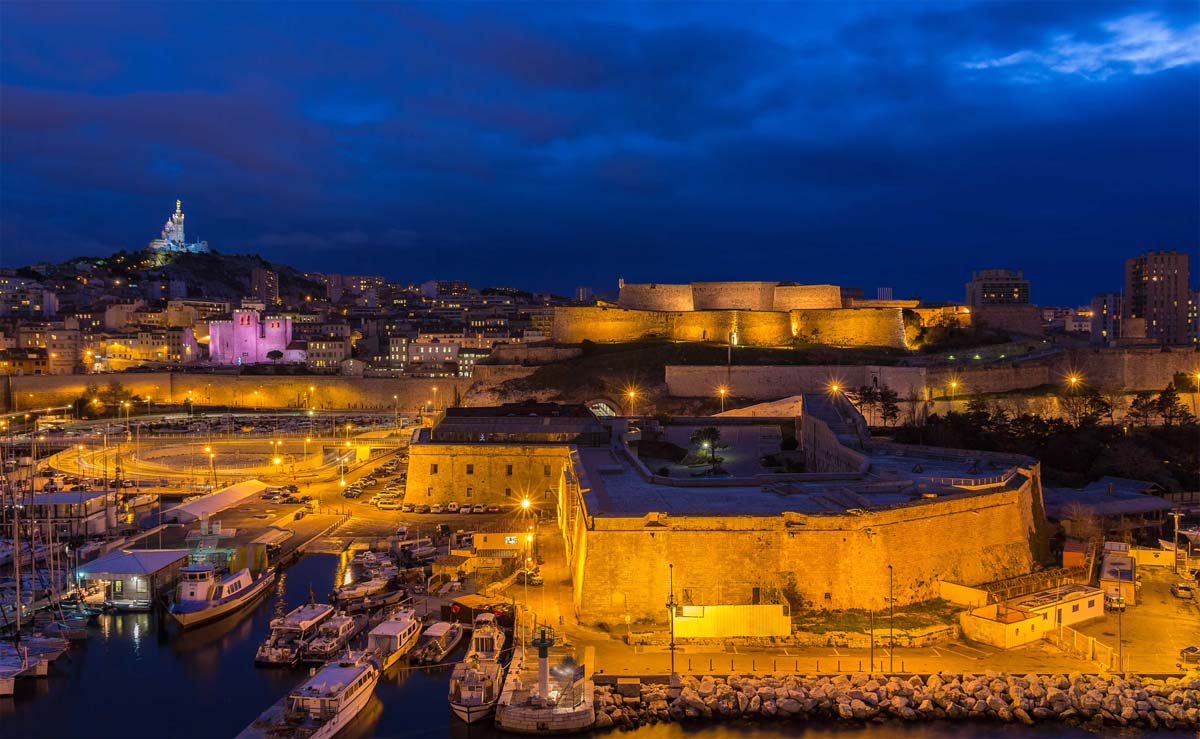 n°2 , boulevard Charles Livon, at the end of the dock of Rive Neuve, just a few step from the Vieux Port. 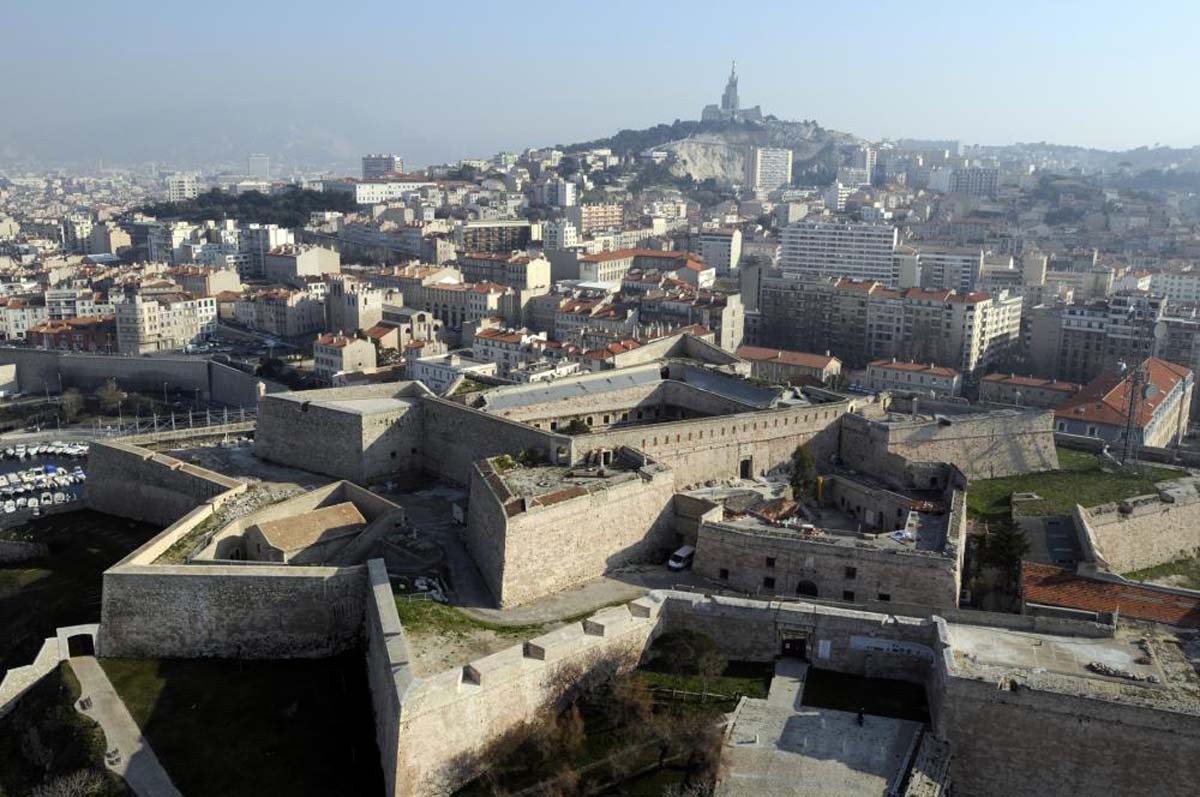 It was built by Louis XIV, at the same time of the Fort Saint Jean, on the opposite shore, so that fear would arise in this belligerent and undisciplined town. It was built on the Saint Nicolas Chapel between 1660 and 1664, by Louis Nicolas de Clerville. Vauban, who wasn’t honored to achieve this project, found it ridiculous and badly-built. But the Fort still overlooks the Vieux Port, with its solid and impressive star-shaped ; there was a lazaretto on its base, a kind of infirmary where socks were cured (in the cove of the actual beach of the Catalans). It was transferred to Saint Martin d’Arenc.

In 1790, during the Revolution, the Marseilles feared that it would become a Bastille nd began to destroy. Much later in 1834, a poor restoration work was done with grey stones, while the fortress was built in pink stones from the Cap Couronne (the restoration work is very visible, too visible).

Under Napoléon III, Marseille benefited from the Emperor’s interest for this flourishing city. He opened a way in 1860, the Boulevard Charles Livon, from the Port to the Pharo (before that, people pade a detour via boulevard de la Corderie). The fortress was then cut in half. From that time the Fort Ganteaume (the lowest one) and the Fort d’Entrecasteaux (the highest one) are separated. The first one became a military circle with a mess for officers. The second one was restored in 2003, hosts the Association Acta Vista which, thanks to many patrons, manage a training site for Heritage skills. Each year, 350 persons are trained to crafts occupations ; The east, west and north ramparts have been restored thanks to this organization.

An old windmill is inside the Fort. Today it is a memorial, as it is carved with the names of fallen soldiers. Strollers can enter the Fort but the central part can be visited as it is reserved for the Army. During the Journées Européennes du Patrimoine (created in 1984, by the Ministry of Culture), it can be entirely visited.
If you are lucky enough to be on the port on the 14th of July, you will be amazed by the beauty of the Fort Saint Nicolas during the fireworks. 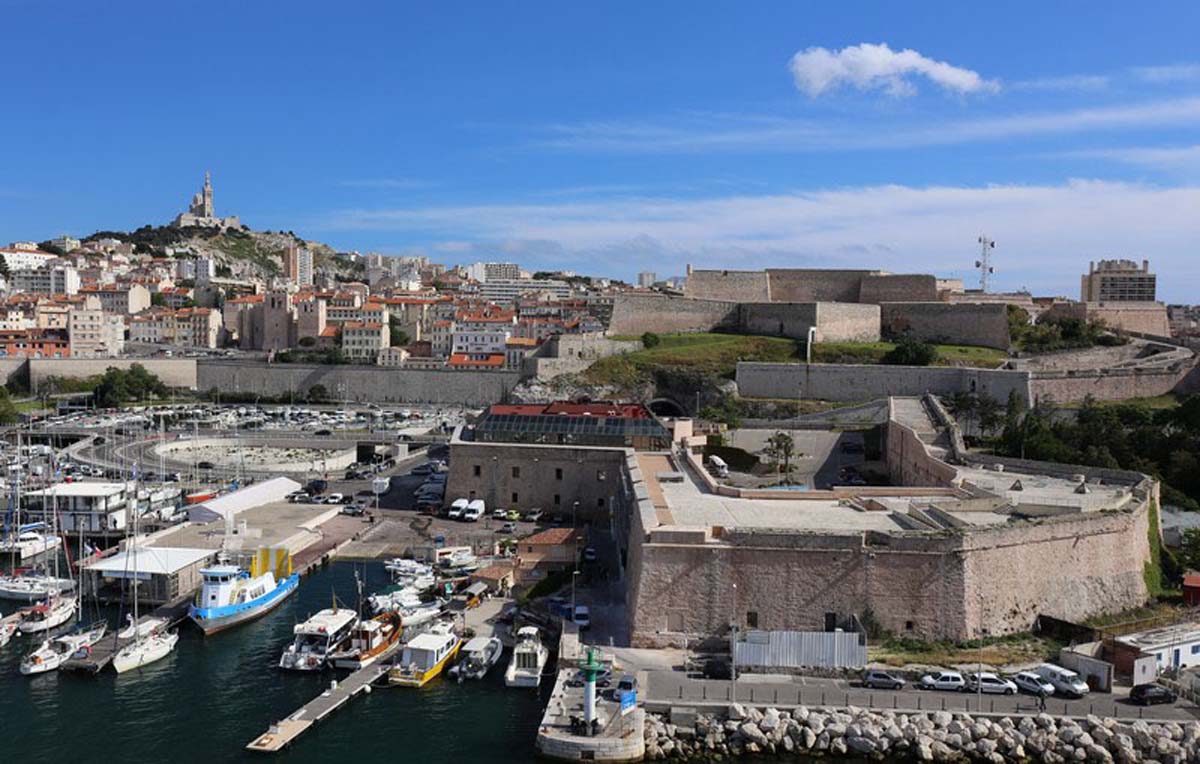 A few meters after Fort Ganteaume, go and drink at the bar of the Sofitel, n° 36 , boulevard Charles Livon. This big five-star hotel (137 rooms) has huge bay windows which offer unforgettable views on the Vieux Port, the Fort Saint Jean and the Vieux Marseille. You can also admire work of arts illustrating the foundation of the town or taste the specialties of the gastronomic restaurant.

Leaving this charming place, have a look at the façade of the former Institut Pasteur (n°71/ transformed in 2006 in a four-star hotel : « New Hôtel of Marseille »). It was preserved and restored ; his name can still be read, carved in the stone. This institute was created by Louis Pasteur and Professor Charles Livon, after the discovery of the anti-rabies vaccination in 1885. It was the first one in France.

If you still have time, come and enter in the « Jardin du Pharo », across the road, to admire this architectural jewel. This palace was built by Napoléon III for his beautiful Empress Eugénie. You will have the most stunning view on the sea, the embankment, the port, the Cathedral, the docks of the Joliette, the MuCEM and the town. After the garden, near the Cercle des Nageurs where our biggest swimming champions train, you can walk on the beach of the Catalans, and dream in front of the panorama.