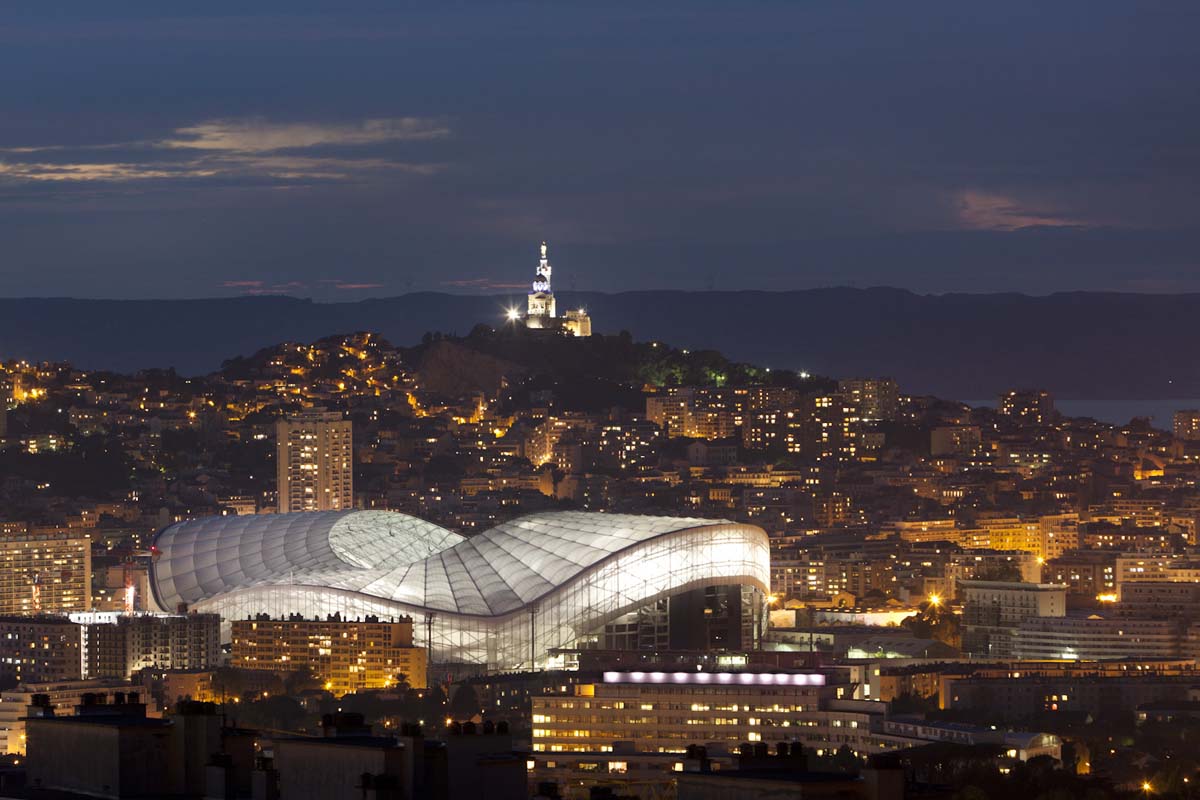 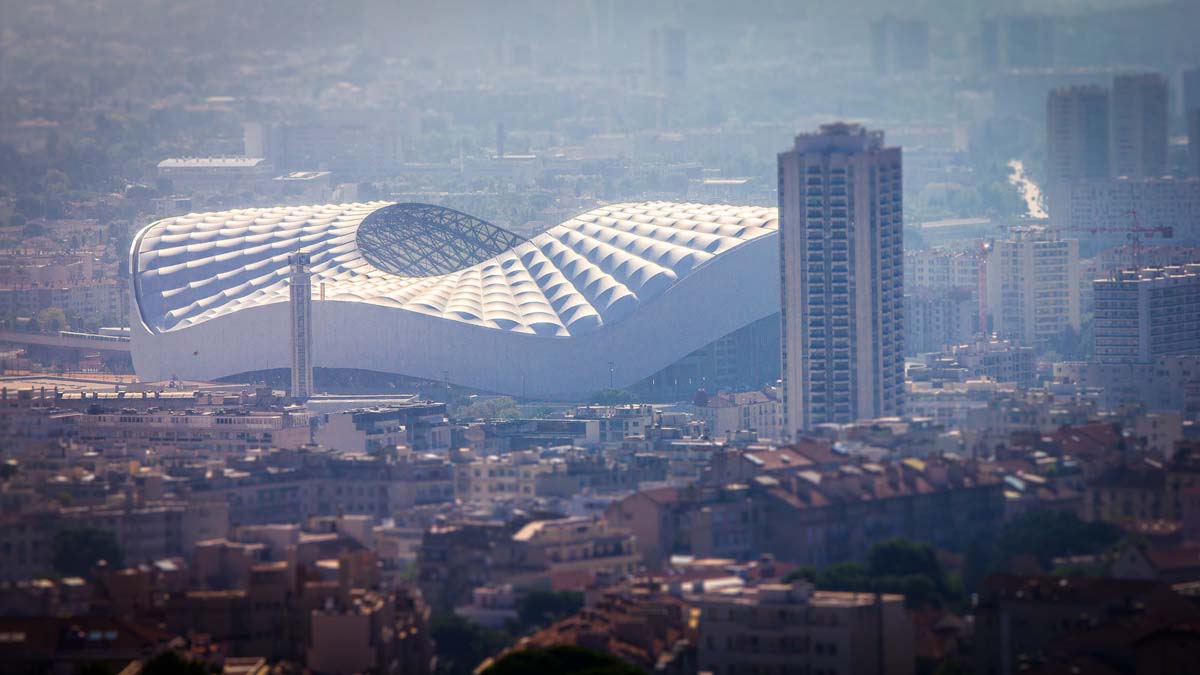 It is the temple of Marseille’s football. It is situated on n°3 , Bd Michelet, in the southern part of the city, in the 8 th district, near the high FR3 Méditerranée tower. Access is facilitated by bus n° 21 (Canebière, Castellane, Luminy) and Métro 2. Coming from the A 55, follow the sign « Centre ville » and from the A 7 take exit n° 36. Marignane airport is 30 km away.

The renovated stadium is a huge building, it can be seen from any height location in Marseille, with its white roof which looks like a sail waving in the wind dedicated to protect the 6700 seats around a modern lawn (hybrid AirFibr /106 m x 65 m). The roof is firmly bound by an incredible metallic structure resisting to the winds force and orientation. A pit between the lawn and the stands protects the players. The four boxes around this mythical arena are independent from one another. The presidential bow (Tribune Jean Bouin/named after a runner from Marseille) is reserved for V.I.P., TV cameras and press.

The stands of the supporters are in the northern turn (turn Patrice Peretti/name of a supporter, 5000 m silver medallist dead in 1912 at the age of 28 years old) and in the southern turn (turn Chevalier Roze/ famous knight in Marseille during the 1720 plague). The stands Gustave Ganay, the biggest one, is called after a Marseille biker, middle-distance French champion(it contains facilities for persons with disabilities). 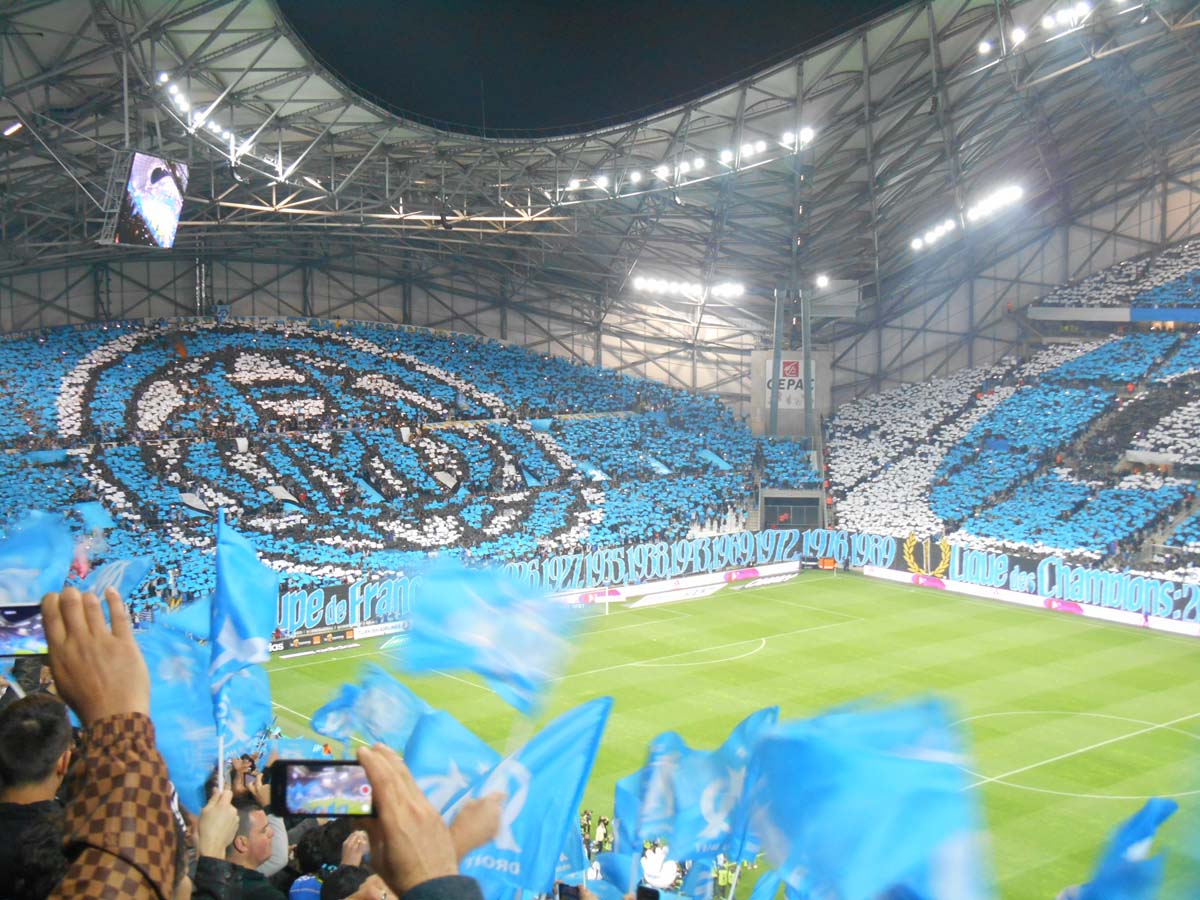 Guided tours are organized (13 €/ reduced fee : 8 €). The « aficionados » can admire the locker room. It looks like a Greek temple, of a very purified style, in the colors of the town, white and blue. They can walk around to the end of the tunnel and get out to the lawn. They will then be astonished by the building gigantism, around and above them, and by the size of the metallic structure which holds the white roof. They can cross the panoramic glazed room to see the lawn or visit the press box… One should be once immersed into this loud, happy and moving atmosphere among the thousands of supporters. At night, the stadium illuminations will dazzle you as well as the fireworks at the end of the game. You can use the online ticketing service to purchase tickets.

The French football team played 13 competitions in the stade Vélodrome. 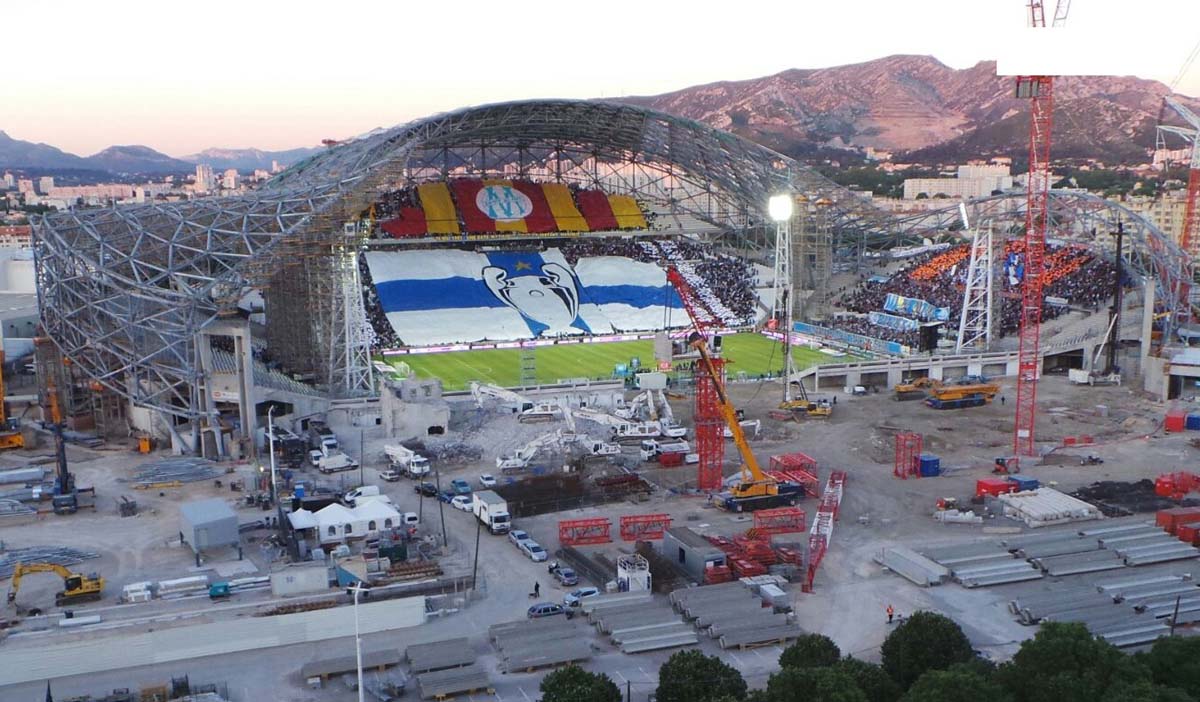 Night lightning appeared in 1970. The hours of sporting events could then change. The construction of the Palais des Sports, in 1988 nearby, marked the end of the multi-purpose stadiums. Nevertheless, from 1980, the stadium is the place for great shows and concerts : Holiday on ice (in 1950). Johnny Halliday performed here 4 times (the last time was in 2009). The biggest came : Joan Baez, Julio Iglésias, the Pink Floyd, the Rolling Stones, Luciano Pavarotti (in 2002), The police, AC/DC, Paul McCartney (in 2015).

Large political meetings were also organized here (Georges Marchais or Jean Marie Le Pen), before it has been forbidden by the Mayor, Jean Claude Gaudin. At the end of the school year, thousand of Marseille pupils come and dance for the school celebrations.

Few people know that under the huge esplanade Gustave Ganay, there is the final chain link of the Géolide underground complex (created in 1987/ 30 000m2), the word biggest wastewater treatment plant. The part under the esplanade is in charge of the biological treatment before clear water is then discharge in the sea (80 millions m3 of effluents are treated, cost : 180 million euros).