Situated in the oldest district of Marseille, the Panier overlooks the Vieux Port from the top of the Esplanade Villeneuve-Bargemon, behind the Town Hall. 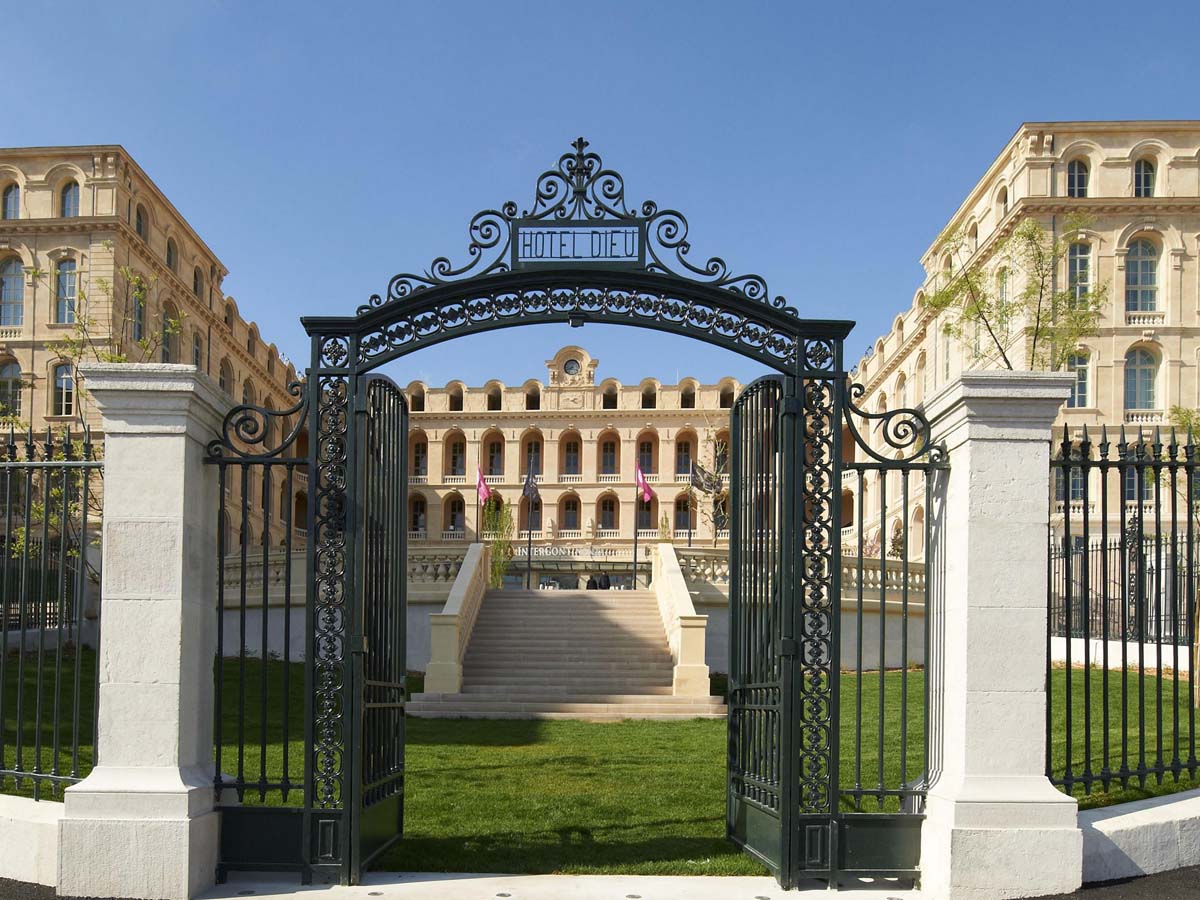 In the 7 th century, France already had several « hôtels Dieu » to host pilgrims or to evangelize travellers. Over time, they welcomed the elderly, the abandoned children, the sick and the beggars. In Marseille, where the actual Hôtel Dieu is, there was the Hôpital du Saint Esprit founded by the Confrérie du Saint Esprit (a very strong order of dignitaries) since 1166. It was built on the ruins of a huge Roman thermal complex (during the last restoration work in the Hôtel Dieu, large, red, yellow and black mosaic areas were found on the ground. It was actually reused to build the crypt of the church ; enormous blocks from the ancient thermal baths are still visible in the Espace Villeneuve-Bargemon).

In 1593 Marseille’s Hôtel Dieu was born as Charles de Cazaulx (Consul of the city) unifies both hospitals Saint Esprit and Saint Jacques de Galice. The hospital was run by six dignitaries (renewed every 2 years/ financiers and benefactors). 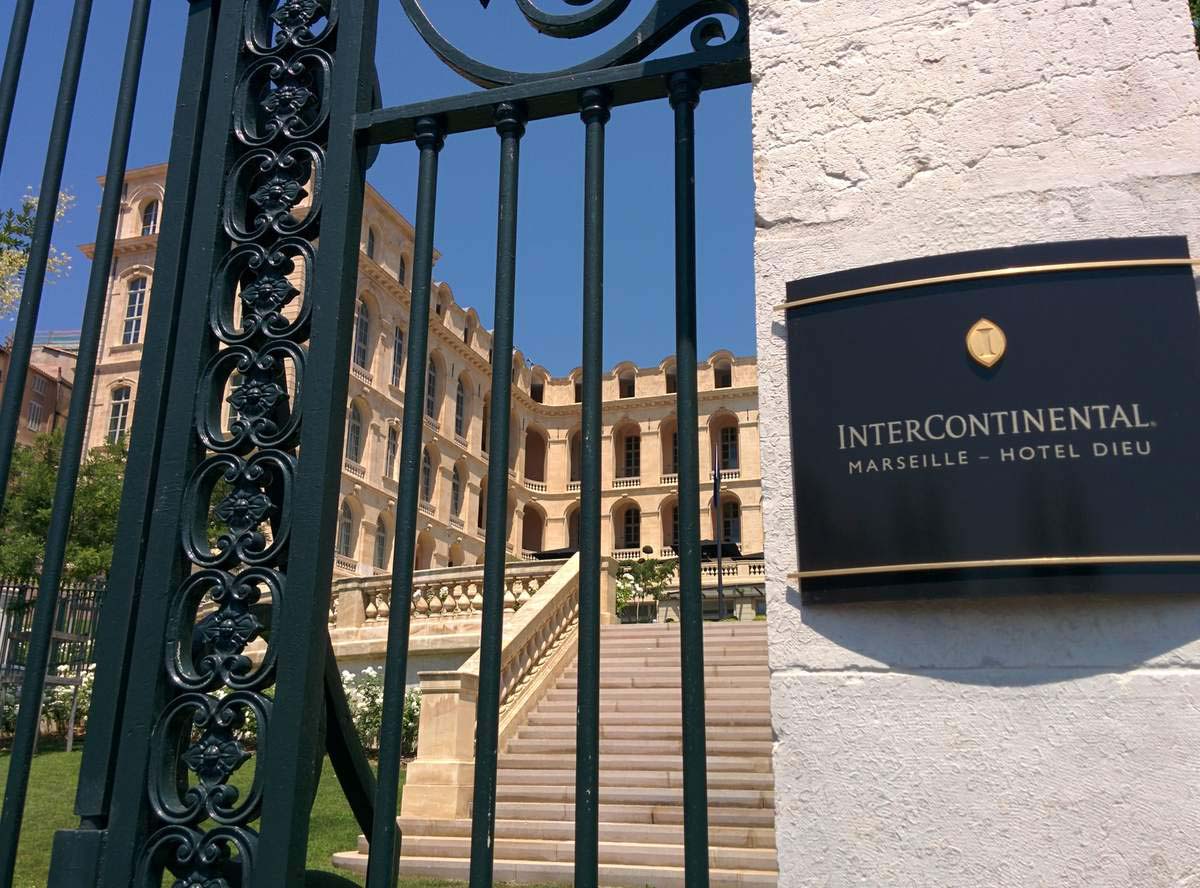 In 1723, Jacques Daviel taught anatomy, his bust is on the esplanade of the Hotel-Dieu . Its employees were lay. In 1753 the hospital changed thanks to the King’s architect, Jacques Hardouin Mansart. The building is then the biggest hospital of the 18 th century. 100 years later, it was enlarged again after the destruction of old houses surrounding the hospital. The architect Félix Blanchet added another floor and created 2 huge pavilions at the 2 edges.

The Hôtel Dieu, as it is today, was inaugurated by Napoléon 3rd, in 1866, on Joséphine celebration day. In the 20th century, some medical professions are taught (nurses, pediatric nurses, midwives). But in 1993, the hospital was obsolete and closed. It was bought by the investor Pierra Vaquier, Axa Chief executive, in 2006. In a few years, between 2006 and 2013, the Hôtel Dieu has undergone an enormous transformation, while keeping its structure as a historical monument, to become a luxuous 5-star hotel; the Intercontinental-Hôtel Dieu. 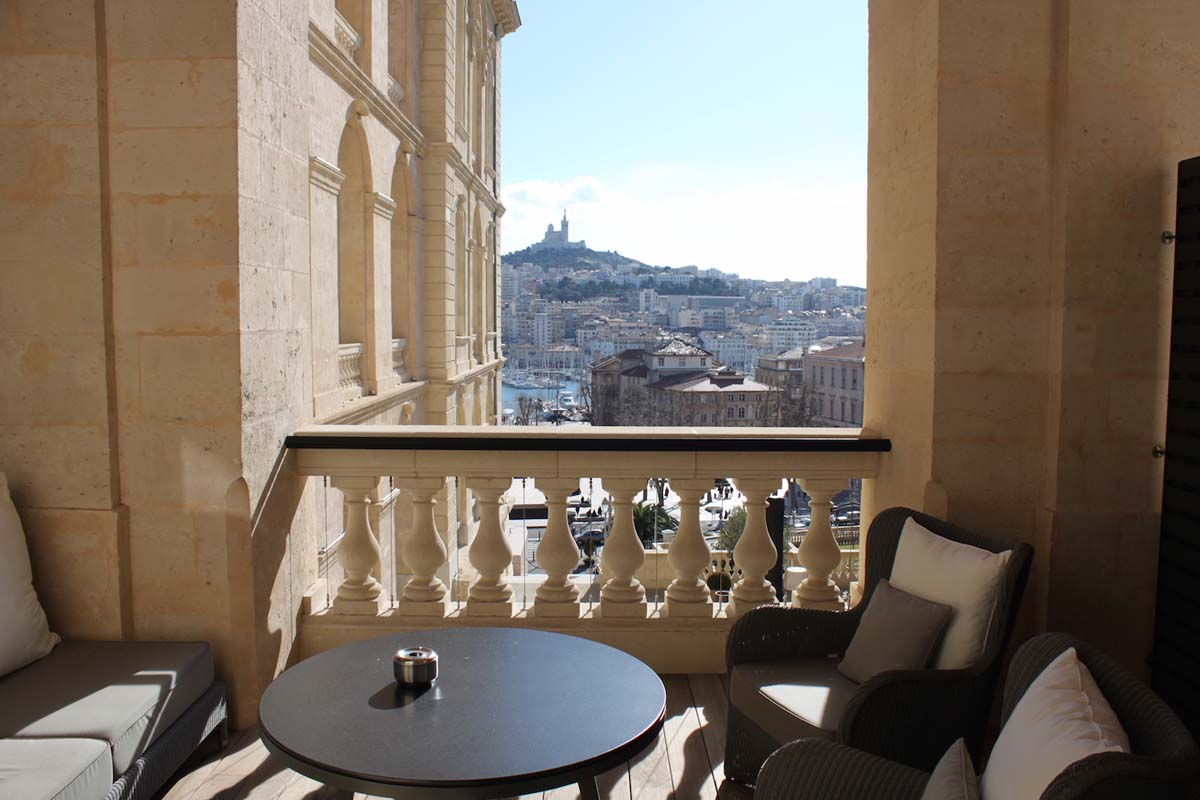 It started to amaze Marseille, from its inauguration day, on the 18th June 2013 (Year of culture), thanks to the Sound and Light Show which was projected on the façade. Its lightings can be admired every night. On the evening of the Fête de la Musique (Music festival), lyrical sounds can be heard.

Today we can go to this former hospital to relax, to visit it, to eat, to sit. This historical monument has lost none of its cachet. On the contrary! The structures of the ancient monuments are highlighted with the cleanness and the brightness of this place enhanced with flowers and shrubs. From the terrace to the bar, one can appreciate the view on the esplanade, the clocher des Accoules, the Town Hall, the Port, the Vierge de la Garde, sit comfortably in cozy seats, in front of the beautiful galleries.

On the terrace, a glazed roof creates a sort of « light fount » in the huge reception hall (total luxury/a very simple yet very stylish look). The highly qualified staff welcomes you. You can then enjoy the Provençal and Mediterranean cuisine of the Chef Lionel Lévy or sleep in a luxuous room with a terrace facing the Bonne Mère, wander in the long historical galleries, touch the wrought iron railings of the Architect Brun.

The hotel also includes seminar rooms (from 30 to 400m2), a cultural space full of history, a SPA, a pool, a fitness-room.

This restored building is another symbol of Marseille’s renewal, in the heart of this very touristic zone ( the Panier and its narrow streets, the Vieille Charité, the Vieux Port the Town Hall, the MuCEM, the Cathedral, the Fort Saint Jean, the Docks, the Terraces. Take the small white and blue train, from the Port to the Panier, or from to Port to the (2,2km). You’ll be pleased !