The santons of Provence

The clay doll of the marseillais

Since the 13th century, the Provençal rewrite  their gospel in which Provence has a central role. Everyone has his own explanation. For some, the santons echo the Christian faith, for others, it tells of popular resistance to the prohibition of midnight masses following the Revolution. Finally some thinks that the santons were the equivalent of the luxurious creches once reserved for lords.
The santon nowadays represents Marseille popular know-how all over the world. 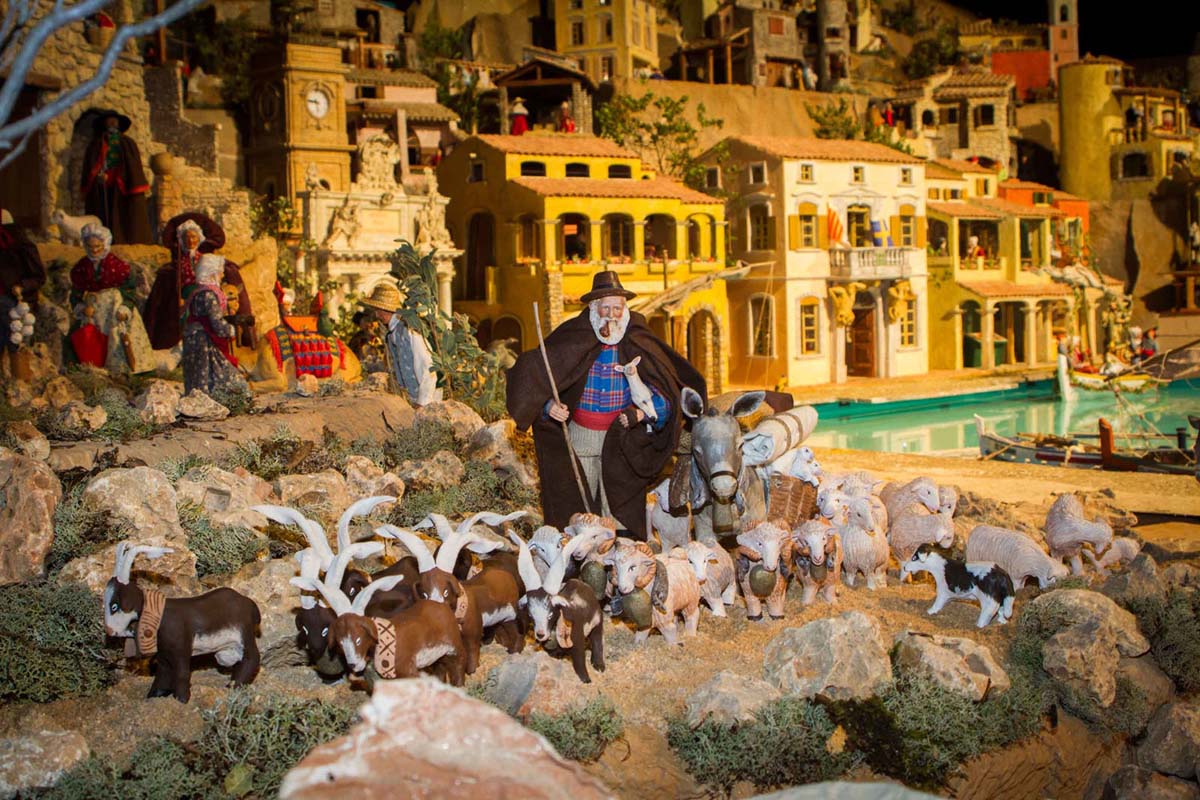 The santons, the ancient marseillais

The manger was a  real live entertainment in the Provençal churches since the 12th century. The Revolution shuts down the churches. In retaliation, Marseille people takes revenge by creating santons, ultimate weapon to resist. Indeed from then, Marseillais created small caracters so that they can be easily hidden, defying authority with the risk of getting caught red-handed and to be beheaded. The tiny characters represent small saints (« santouns » in provençal is the diminutive of santon), are manufactured in the traditional way with breadcrumbs or papier mâché, technique already used for mask-making.

In the family circles for a long time, this devotion spread  over the town and became public and popular. The crowd in front of the big mangers of the churches at the end of the 18th century  is a proof of the importance of this ceremonial in the southern culture. A verysmall minority of people then had  mangers made of spun glass or  breadcrumbs  preciously shown in glazed niches. During religious ceremonies, kids, to avoid boredom,  invented their own world and played at the « capello », that is to say at the chapel. Using « santouns » especially made and inspired by «santibelli» (reduced church statues protecting families and homes), this childish tradition give the santons  a breath of fresh air.

Before the local red clay became a manufacturing material, santons were fragile as they were made of dry uncooked clay. They were then painted with water colors and gum. Later, the clay will be cooked in an oven. Santons will then be less fragile.

The Santons Fair is today one of the most living traditions in Marseille.

Once upon a time, at Christmas 1803, on the cours St Louis near la Canebière, three merchants sell clay santons. Accepted by the municipality of Marseille, this tiny market took off. It was an immediate success. The « fiero dei santoun » shines in la Canebière. To the three main characters are progressively added sheep sheperds and their cattle and the Magi, which are added in the manger for the  Epiphany.

At the beginning of the 19th century new characters appear :  popular Provençal characters who come to visit the Newborn and bring him presents (only in Provence). Unexpected but still prestigious the bugadiero (washerwoman), the boumian (chicken thief), the amoulaire (the grinder), and of course the Arlésienne. Each figure offers Baby Jesus a present or travels the road to spread the Good News.

In a traditional Provençal manger, all these main figures are in a lanscape with a hill, a river, a bridge and olive trees (usually represented with blossoming thyme). Opened each year from the last Sunday of november to the 31st of december, with sounds of tambourines, applauded by a cheerful and impatient crowd, the fair is inaugurated in Saint-Vincent de Paul des réformés church, in la Canebière.

Today, in Marseille, the new generations just like their ancestors can’t do without these small clay figurines. The only thing they can’t do is speak. For Christmas, to  « do the manger » allows everyone to express their faith  and reveals a deep love for the land and the past 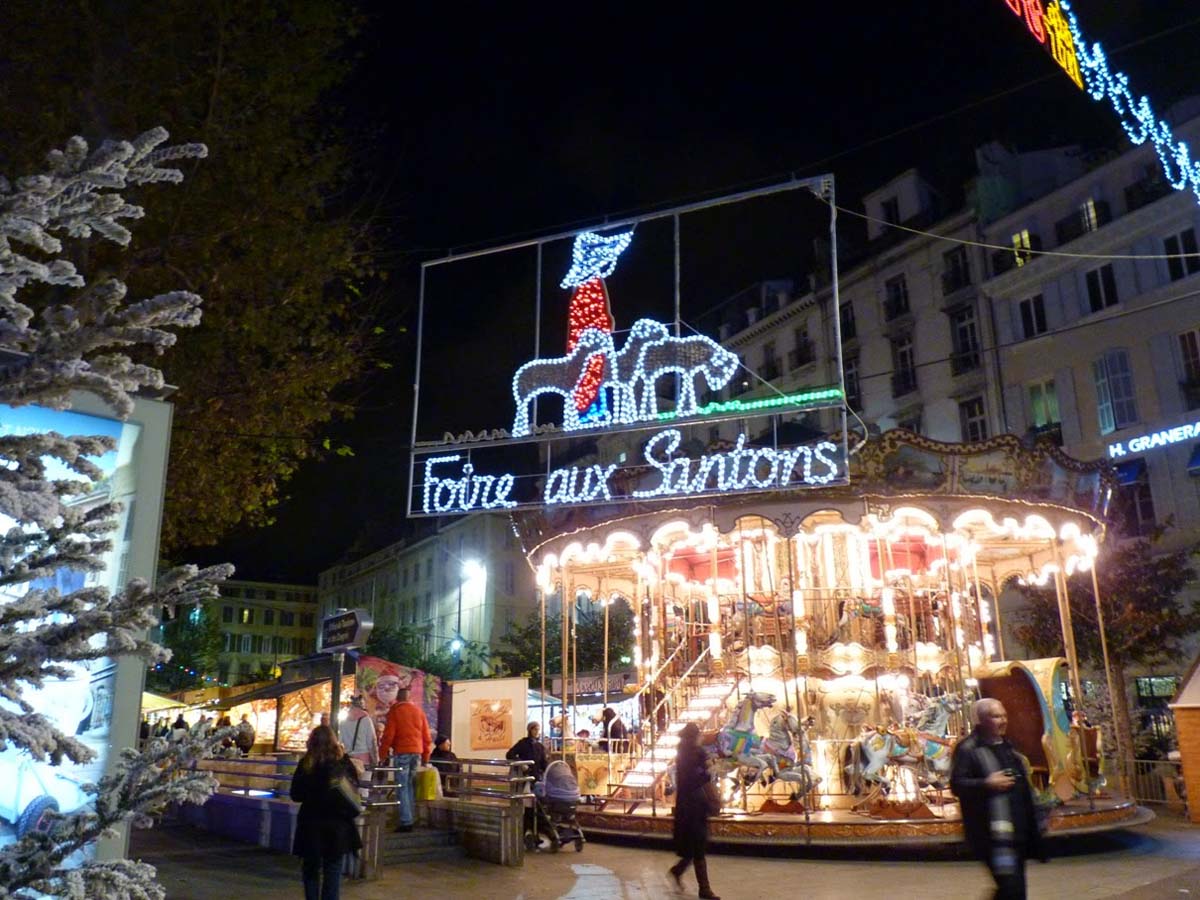 The manger and the santons in Provence

The word « crèche » is from the latin cripia which means feeder. The santons are colorful clay figurines. They represent men and women from the terroir. They each have their own physiogonmy and  character; they are the soul of a cheerful, sensitive, malicious and brave people. They are joyful, alive and friendly, staid, naive and jokers. They are definitively the heirs of this land of Sun and Mistral. They are the fragrances of lavender, honey and olives ; of the land of the « midi ». The santons are the hope and the joy in « the year to begin » as it erases the resentments everyone could have known in the finishing year.

They give offerings : fruits of the earth and fruits  of their daily labor and their art. Each santon can be recognized by the present given to Jesus: the Ravi…the Ravido… The hunter…the miller…the sheperd…the sheperdness…etc

The santons seem to be born from an ancient souvenir, the Gaul figurines. They were non-conformists in their faith, they don’t have any ceremonial leader, it is a popular and Provençal piety. At Christmas 1223, François d’Assise imagined the first manger with 5 characters. « I want to evoke the souvenir of the baby born in Bethléem and the annoyances he suffered from his very childhood; I want to see him, with my eyes, like he was, lying in a manger, sleeping on the hay between a donkey and a bull ». The little poor then became the Holy patron of the santon-makers. Since the 13th century, the Franciscans introduced the manger in Provence. It is said that François’ mother came from Provence, Dame Picca… de Tarascon…

The santons are never made of plaster but of clay ; the oldest molds are from the 18th century.  Then works of  craftsmen working with their families, at the vigil, under the « calin » (oil lamp) ; these santons were not cooked and very fragile that why very are very few of old santons left.

They are today cooked in the ovens of Aubagne, Aix-en-Provence, and in the high Var… by professional santon-makers.