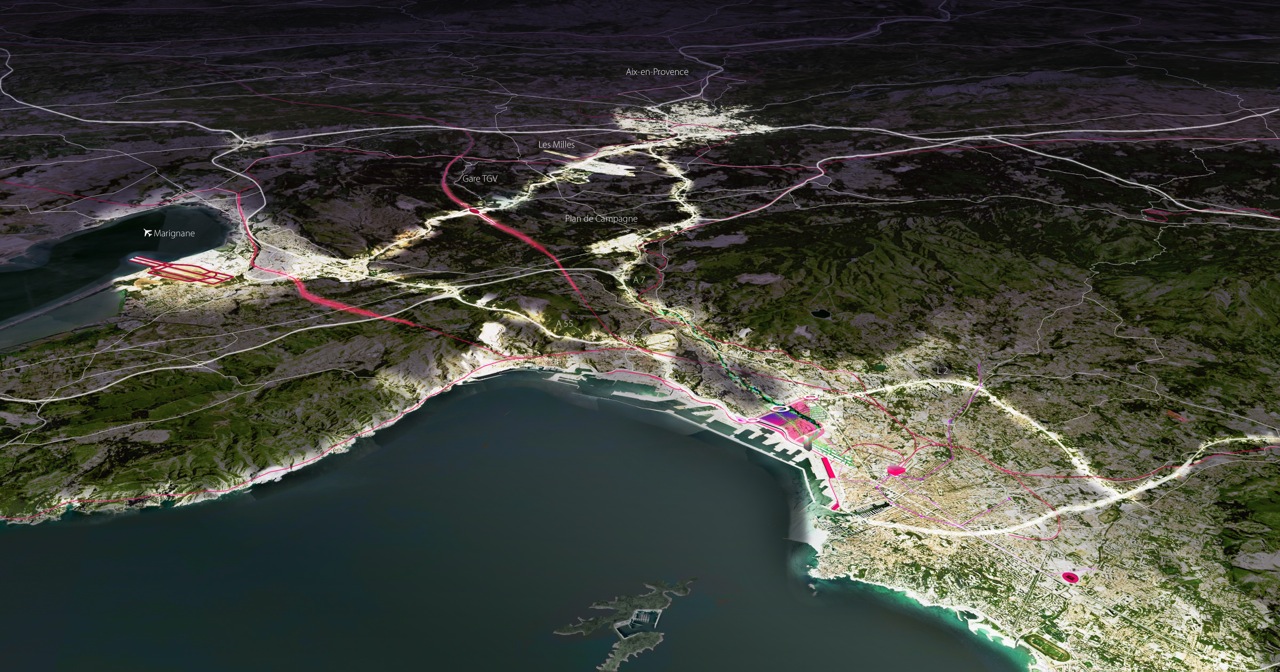 The projects
2013 has shown that Marseille is on its path towards a better future. It is today a city at the point of modernity. Marseille was granted with the “Grand Prix de la Ville Européenne » (European town Grand prix) for everything done in urban development, transportation and culture, especially for works done on many areas (The Vieux Port, The Hotel Dieu, The MuCEM, the Cathédrale de la Major and its vaults, The Fort Saint Jean, the terraces of the Port, Notre Dame de la Garde, the J4 , the piers of the Joliette, the CMA-CGM tower). To facilitate displacement of inhabitants and tourists, public traffic means have multiplied and extended in a few years.

Ongoing projects and constructions show the economical dynamism of the town.

The mall of the Prado
Under construction next to the Vélodrome stadium, at the crossroads between boulevard Michelet and l’Allée Ray Grassi. It will be handed over at the end of 2017, 23000m2 on 5 floors (50 shops, a food retailer, 800 parking places, a two-stars Hotel / well-served by the bus and the tube). Its outstanding perspective, its pedestrian area, its angular entrances, its landscaping aspect, its vegetated terraces with flower and aromatic plants… Lafayette Group, at the origin of the project, can be proud of this atypical and original creation.

Smartseille (15th district)
Marseille has been chosen to be the town of the future, by the representatives and the Prime Minister, Manuel Valls. On the Allar islet, the site will be finished by 2018. It is an experimental part of the town, a kind of Ecocity with technological innovation and environmental considerations. ( waste will be treated on-site with a « micro remédiation » system with fungi). Within « Euroméditerranée », the 112th village of Marseille is created on 14 hectares with 60000 m2 of offices and houses for 4000 persons, workers and retired. This XXL area was conceived by Eiffage, the green reference for the cities of the future. The international Commercial real estate and Investistment, the MIPIM, qualifies it as the « world best urban project ». A grren district among the 3 Frech tests sites. Easy access for the A7, A55, A50 (via the Prado Carénage tunnel) and the future exchange zone of the Capitaine Gèze.

La Marseillaise and the business district, Euroméditerranée.
A new star has risen, a 135m high tower, neighbour of the CMA-CGM tower (147 m) called « La Marseillaise ». A 15-floor futuristic building conceived by Jean Nouvel, to be built by Constructa to be finished by the end of 2018. This 35-floor tower will offer 35 000 m2 of offices in an internal oasis; a company restaurant and a sea view. It is also made of a high-resistance concrete and sun shaded and tinted windows. This tower will be close to two smaller ones (113 m and 99 m) also part of the business centre of the Quais d’Arenc, Euroméditerranée.

« Les Maisons Bleues » (the blue houses) of Jean Nouvel (13004 and 13013)
Ametis started the construction of the new residence « La Calanque » since 2015, in the ZAC in St Just. It will turn a few heads because of the color of its walls as they will be as blue as the walls of the « Hôtel du département”, just opposite the highway.
This low-energy building and its grass-covered façades ending at 50m high by landscaped roof terraces, will include 90 housing units accessible to owners, 49 rental apartments, 175 social housing and 166 student accommodation. Underground parking for residents and others for those who go to the close Dôme for the shows.

The Vieux Port (the old harbour)
The spectacular renovation around the Vieux Port, made for the Year of the Culture in 2013, has finished in 2016, with the reconstruction of the Quai de Rive Neuve where the broad seaside sidewalks were widened and reinforced with flagstone of granite. Strollers are delighted. Shops and restaurants look brand new and they benefit from tidy flower-filled spaces, regulated and under video surveillance.
By the way, projects are actually studied for pedestrians to cross the port. A catwalk seems more realistic than a transporter bridge.
The redevelopment of the water basin of the Carénage is also studied, as well as the replacement of the hydraulic lift of Eiffel (created in 1892, closed in 1967/ it was going to Notre Dame de la Garde /there is only the huge structure of the terminus left), by a modern cableway, inspired by Grenoble’s one. It could solve the congestion problems in the narrow streets that access the sacred places, as there are more and more tourists.

Bleu Capelette (13010)
Works are in progress… Should be finished by 2017. The growing working-class neighbourhood of the Capelette gets another chance. Within walking distance of the Vélodrome stadium and its new mall, next to the Palais Omnisport, near the Parc du 26ème Centenaire, nearby the L2 motorway intersection « Florian”, a new mall will settle with 42500 m², 3 floors and 1500 parking places. This shopping and nutrition area (« Auchan Gourmand ») will also hosts a new cinema “Trois Palmes” (12 screening rooms, 2840 seats).

The Tramway
The Marseilles like it as it is practical, beautiful, clean and silent. Built faster and cheaper than the underground lines. That’s why existing lines are to be extended in 2016.
Then T3, between Arenc and le Silo, will be exteded north until the Castellane, through Capitaine Gèze, Cap pinède, Lycée nord (St Exupéry), Saint André. At the south, it will go to la Rouvière, through Cantini, Sainte Marguerite-Dromel and la Gaye.
A 4th line (T4) between La Blancarde and Sainte Marguerite-Dromel will be built.
The T1 will go up to Aubagne. A line will be created between Saint Charles and the Catalans.
All these projects to be ended by 2033.

The Canebière in culture
Many Marseilles wish that this artery of the city regains its lost fame. A vast project is already studied, as a public inquiry was launched since november 2015, by Sabine Bernasconi, Mayor of the district.
This involves creating a big cinematographic and cultural complex, at the top of la Canebière, where the 1st and 7th district townhalls are actually.
By 2018, this project will be built on the Square Léon Blum, by Artplexe thanks to the architect Renaud Terrazzi. La Canebière will then have a new artistic spot (14 rooms including 1700 m2 of cinema, 270 m2 for expositions, 450 m2 for shops, 650 m2 for restaurants and a panoramic roof.
7 rooms will be dedicated to arthouse cinema. The existant cultural spots are about to work together. Indeed this cinematographic complex will become a tool for students and companies as conferences and debates will be organized.
Pending the achievement of this building, the district townhall has created a festivity each last Sunday of the month with the local cultural actors.