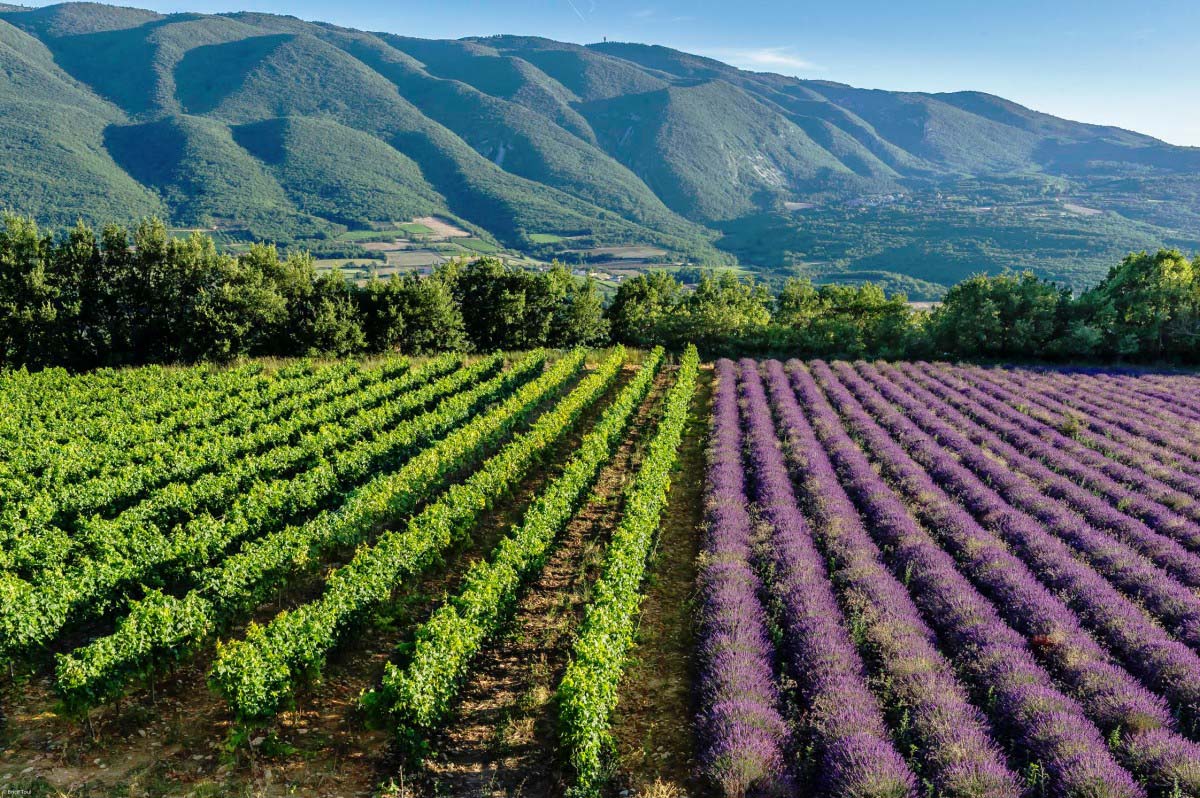 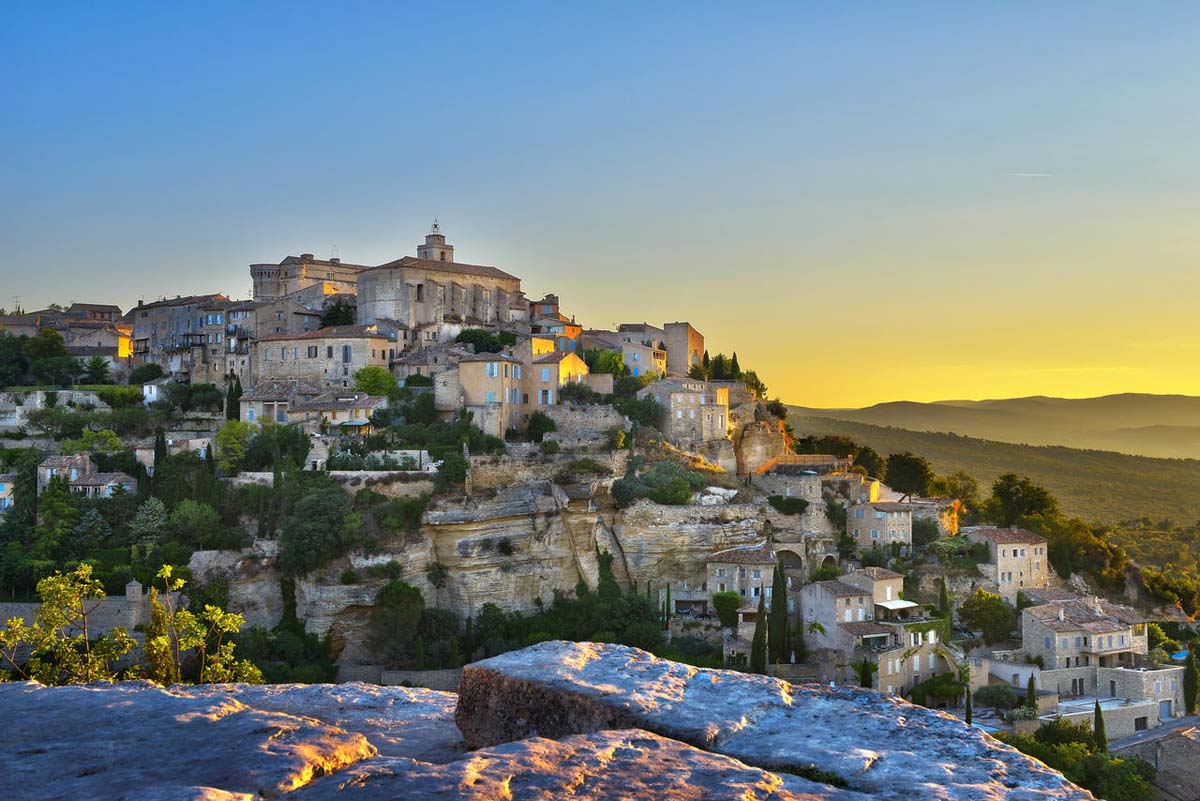 Le Luberon : a land blessed by the gods

Surrounded by the Alpes de Haute Provence and the Vaucluse plain, the Luberon emerges; like the Mount Olympus, swathed in perfection. Luminous and characterful, the visitor discovers at every glance a quiet and delicate history. It is nearly an imaginary painting in which nature has combined all the lights and colors of Provence (the lavender soft blue, the flamboyant green of its vast forests, the copper shades of the ocher cliffs and the ivory of limestone hills…).

Living painting sung by Cézanne, this beautiful Provence is palpable and visible. Humans miraculously didn’t damage the Creation there.

A walk in the Luberon? You will feel the warmth of the bories and of the low dry-stone walls, the majestic bastides will transport you over the ages, the hill-top villages full of memories will charm you. Saignon, Gordes and Manosque are well-known, but also Mirabeau and Vaugines where « Jean de Florette » and « Manon des sources » were filmed.

The region is affected by the mistral and can be subject to harsh winters. The Luberon, cut in half by the valley of Lourmarin, is a terroir full of contradictions and surprises. Its dry soils do not constitute an obstacle to an abundant vegetation : thyme, rosemary, … It is a rough land where wild plant species survive despite adverse weather. This pre-Alpine mountains, composed of the Grand Luberon and the Petit Luberon, is at 70 km at the North of Marseille, its highest point is the Mourre Nègre (with 1125 m).

Since 1977, the creation of the regional natural park of the Luberon owes its celebrity to many villages such as Saignon, Gordes, Lourmarin, Ménerbes and Roussillon which names are now well known worldwide. Lacoste retains the sulphurous memories of the Marquis de Sade.

This park combines cultural development and discovery trails through some projects which aim is to inform and educate the general public highlighting this unique cultural and natural heritage. The Museum of Paleontology and the « château de Buoux » welcome all the visitors who want to better understand the geological and cultural history of Luberon.

Finally, the market places gathering local products sound like an ode to this land: at the forefront, the truffle, queen of the flavors which secretly develops inside the truffle oaks.

Similarly, the lavender honey takes over all the fragrances of the natural flora, with its pretty bright yellow and its unique scents and testes. To complete such a delightful menu, you can taste a Côte du Luberon, a Mediterranean grape variety, cultivated on dry and sunny hills which gives to the wines a fine and fruity taste.

So many natural wonders : sight and smell ignite...

When you are out for a walk, your sense of smell always has to be on the alert because of the opulence of scents. The fresh fragrance of blue fields of lavander overtakes and takes us back to the time when our grandmas put small seeds in a bag to perfume the linen. The thyme flowers add a special touch to this delicious olfactory bouquet, as well as the rosemary and its camphorated fragrance. Its azure blue color echoes back the indigo of the Mediterranean; this plant, with multiple virtues perfumes all the Luberon scrubland, which offers lavender optimal conditions to grow that is to say calcareous and dry soils.

It is above all a feast for the eyes. There are many natural wonders and the attention is drawn at each moment like in front of the mysterious and enchanting “Fontaine du Vaucluse”. In the exceptional site of « Vallis clausa » in Latin, which means « closed valley », a magnificent river tumbles out of a limestone wall : la Sorgue de Vaucluse, just a step from the charming village that has been given the name of the valley.

In a place where water is so important, the mystery of its origin hasn’t been totally cleared up. This river owes its flow to a gigantic underground water system, which constitutes a natural reservoir of about 1100 km2 from the “Mont Ventoux” to the “Montagne de Lure”.

Many artists were charmed by the superb quality of the landscape : Chateaubriand, René Char, and Frédéric Mistral, to mention just a few, all described their feelings in that location, where the capricious fountain favors meditation, with its living water in Spring and Autumn. 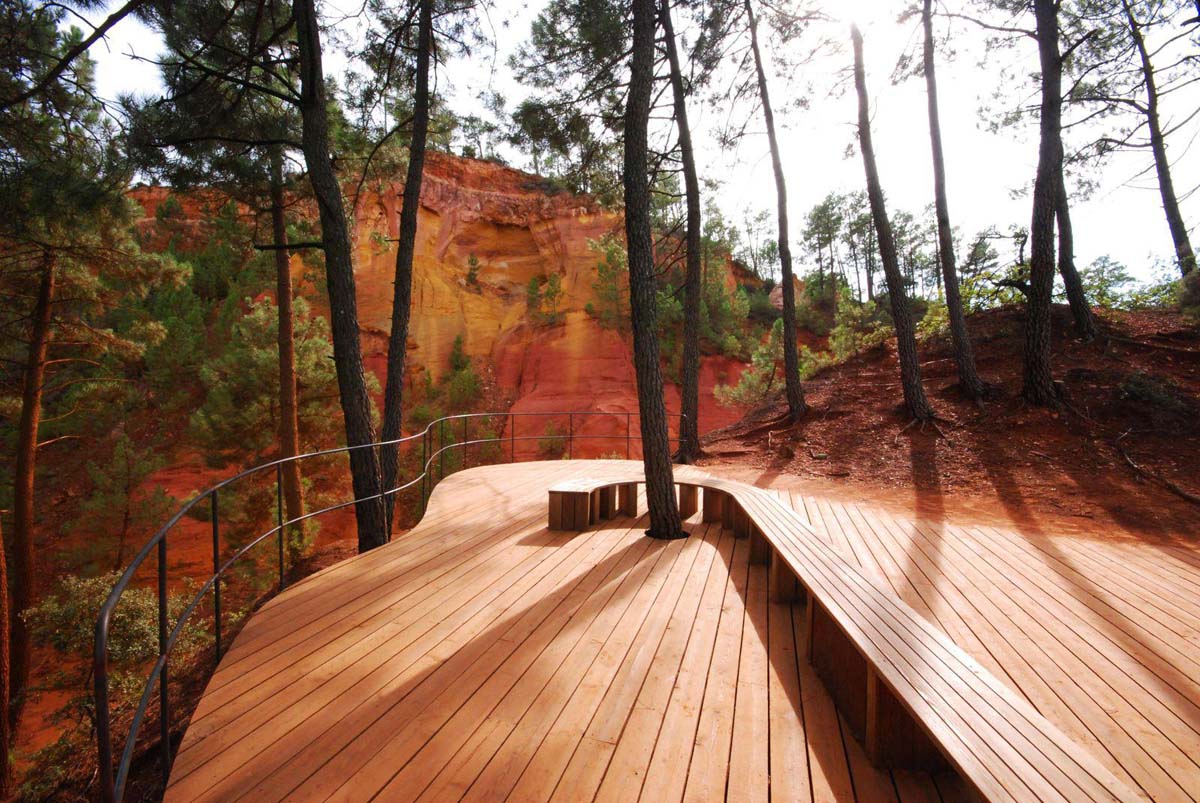 The apotheosis of Provençal stone

Few territories can boast of having many villages listed among the most beautiful of France. Saignon, Lourmarin, Ménerbes…and many others are the treasures of the Luberon. For example, Gordes : authentic, raw character, perched on a valley in Provence,  rooted in rocks. It is captivated by the brightness of its stones, its narrow cobbled streets, its high houses which overlooks the terroir.

The « château de Gordes », magisterial building classified as Historical Monument since 1993, has elegant contours and a proud stature. The inner courtyard can be admired via the vaulted door. Its radiations are such as the Town Hall and the « Musée Pol Mara” have been installedin its galleries. This piece of paradise is particularly well known for the Bories, a village with strange round dry-stone-built houses and the « abbaye de Sénanque”.

We understand that the unclassable beauty of this place fascinated painters looking for modernity such as Marc Chagall, Jean Deyrolle, André Lhote, Pol Mara and Victor Vasarely whose works sing with the cicadas the colors of this land of milk and honey.

A curious traveler will have many things to discover: a fabulous location near Apt, the Provençal Colorado. One of Nature’s oddities: a striking panorama with a wide variety of ochres. The Provençal Colorado offers 4 hiking trails which fastest paths goes through fairy chimneys, rocky peaks “wearing pointed hats”. A little further, an orange-sand river waves in this rocky Sahara. 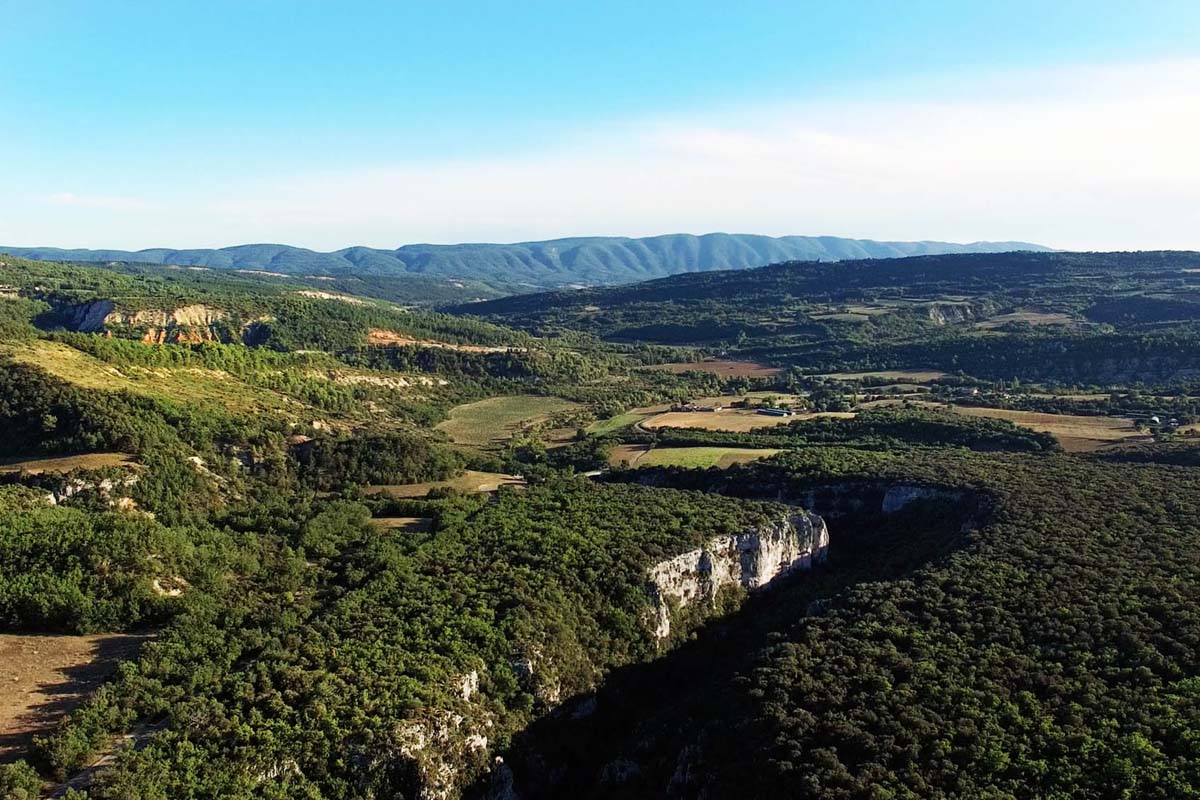 Not far from there, 10 km from this Provençal Colorado, loose stones replace ochre images to draw the « gorges d’Oppedette”. This magnificent wild, bitter and violent site grabs you.

A canyon dug by the Callavon which carved the rocks creating narrow beds and magnificent gorges.

The GR4, GR6 and other paths propose hikes for des promenades for well-equipped hikers who don’t suffer from vertigo. To be seen, the small medieval village of Oppedette. It looks like a real postcard with its 40 inhabitants, its ruinous windmill, its perched houses, and its strangled and sinuous narrow streets.

Saignon is another perched village on a huge rock, over the valley of Apt. It looks like a sentinel of an ancient Roman fortress (Sign in Latin). Indeed, this rock is said to have prevented invasions. Fires then warned Gauls villages. In Roman times, the village became a holiday venue where many villas are built.

From 800, the site hosts the Benedictine abbey of Saint- Eusèbe, and the church of « Notre-Dame de la Sainte-Croix » became a popular site of pélerinage and contemplation in Luberon and in all Provence.

The Romanesque church is then an indispensable step for pilgrims on the Via Dominitia between Rome and Saint-Jacques de Compostelle. Today, this lovely village is situated around a central square which fountain (sculpted by Joseph Noël Elzéar Sollier, disciple of David d’Angers). The alignment of a fountain and a lavoir with three ponds is typical of Provençal villages.

You can hear waterrun-off as you get lost among its steep alleys until you see the belfry and its campanile built in 1584. The calades, restored recently, permit to discover the old oil mill and the  ruins of the ancient ramparts.

For perking you up after such a climb, visit the bakery where the village specialty waits for you: the famous fougasses (flat-breads) to be eaten with a small glass of local white wine at the nearby café.

This village looks like a formidable natural fortress with its stairs and caves stolen to the rocks. What a unique panorama on the Grand Luberon and Petit Luberon.

A sustainable and controlled agriculture has always shaped the landscape around Saignon : vines, fields of lavender and truffle oaks. Nowadays a large environmental garden preserving the forgotten vegetables and rare plants is to be visited.